Dining Disrepair And What To Do About It

When we were youngsters, the idea of eating dinner anywhere but the table was unheard of. Children behaved at meals. You were to sit, let the adults talk, and practice impeccable table manners. That was just the way things went.

Now, though, family meals seem to be in disrepair. The decline of the dining room is a testament to the fact that we no longer value sitting at the table. Instead, we eat at different times and hence have no real routine. As there’s no set meal, it’s more likely that each of us ends up eating on the go or sitting in front of the television.

It’s a sad state of affairs. Throughout history, meals have been a big event in the home. They have always been the one time when the family comes together to talk about their days. Now, though, we don’t even have that. Is it any wonder that we find ourselves more distant from others than ever? We’re so caught in technology and convenience, that we fail to take our time over anything. 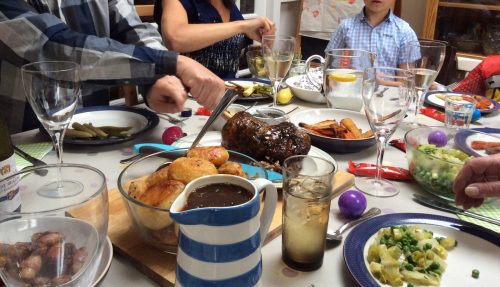 But, what’s so wrong with television dinners? There’s no denying that some households enjoy eating this way. And, if you manage to incorporate time together elsewhere, tv eating may not be such a bad thing. Bear in mind, though, that food and drink spillages could wreak havoc in your living room. Plus, this is no way to teach your kids decent table manners.

If the situation is getting you down, it’s time to make a change. Bear in mind that it’s not going to be an easy transition. If your family have gotten into the habit of convenient eating, they may fight against you every step of the way. Plus, you may find yourself fighting against the new routine. Even so, a little perseverance could see mealtimes turning back into quality time. And, to make the transition easier, we’ve put together a list of how to make mealtimes work again.

Prepare one meal for everyone, and make it at a set time.. If people don’t want to eat it, they can go without. You can be sure they won’t make that mistake twice.

Create an eating area in which you can all sit. This doesn’t mean you have to set aside a dining room if you don’t have the space. You could always place a table in your kitchen, or install a breakfast bar, and incorporate bar stools. Any space will do, as long as there’s room for everyone to eat properly.

Ban all technology. Phones and television are the most to blame for the destruction of mealtimes, so cut them out of the process. Make sure everyone knows that they’re to leave their phones in another room. And, make sure to follow the rule yourself!

Take the time to talk. All your efforts will be wasted otherwise. Speak about your day, and ask everyone else about theirs. It’ll seem strange at first, but you’ll soon find you value this quality time.

Like Loading...
This entry was posted in Blogs and tagged Dining, Family dining, family meals. Bookmark the permalink.