Posh Tequila & Boaking on Beetles with The Liquorists

The lovely Liquorists have been running tasting nights at Reserve, their cool as spirit store and tasting house on King Street for a few months now. I’ve been to a couple and always been impressed by both the quality of the tipples and the knowledge of the guys who run the tasting sessions.

On Tuesday 17th December they ran a tequila tasting in association with Don Julio. The night was billed as tequila tasting with food matching which sounded pretty decent. So me and my three drunketeers (three drink sodden boys of my acquaintance) met at the allotted hour and prepared to face the worm.

We started the evening predictably enough with a margarita, a tequila cocktail classic and everyone’s favourite. I loved it, but the boys found it a little sweet for their manly palates.

Introductions and formalities over with, we were presented with three shots of tequila, we were talked through each shot, how it was made and how to taste it. Regrettably the first drunketeer is a naughty maverick freestyler who promptly downed his. Tequila, especially decent tequila is a surprisingly lovely sipping drink. To taste and appreciate it properly, like most drinkies you should roll it around your mouth and savour it. Not down it in one and kill it with salt and lime. 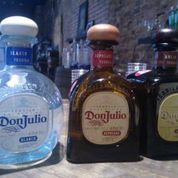 Firstly we tried Don Julio Blanco which is their decent, basic tequila. We followed that by the drunketeers favourite, Don Julio Reposado which has been aged in bourbon barrels for eight months. You could definitely pick up on the honeyed smoky flavours of the bourbon. This I liked.

We then tottered on to our next tot, Don Julio Real Extra Añejo which again is premium tequila, aged in those beautiful bourbon barrels for 18 months. I really enjoyed this, I loved the more intense, smoky flavour of the tequila, the boys had mixed feelings, but two out of three of them enjoyed it.

The evening then took a dark turn when the details of the food matching were revealed. I thought we might be matching with olives, or cheese and pineapple on sticks or something SENSIBLE. But no. We were presented with plates of insects. This is I’m a Celebrity territory and I’m so not a celeb!

Bravely and gamely my insanely gorgeous and courageous drunketeer Bobble stepped up the the plate and held my trembling hand (the other two chickened out, wimps). We were given a plate of three June bugs to scoff and a Tequila Daisy cocktail. The cocktail was lovely, the bugs, less so. For a start they were massive, crunchy and their dried up legs tickled your tonsils on the way down. This made me boak. I boaked big time baby!

Somehow we made it to the next round. We were given another drink but I have no clue what it was, other than it stopped me heaving on my shoes. I was given a full plate of dung beetles to nosh and Bobble, brave, brave Bobble had a giant waterbug which he described as being the rhino of the insect world. To be fair we both gave our respective plates a good going over, but I was beaten by greedier boys and Bobble defeated by his giant rhino. I do feel however that we acquitted ourselves well.

We retired to our seats to snarf shots which were unclaimed and watch everyone else boak over plates of dried insects, the “winner” had to eat a scorpion, poor sod.

Thankfully the Reserve guys had a little restorative treat saved for us at the end. Decent sized shots of Don Julio 1942 Añejo which is a gorgeous tequila, aged for two and a half years in those bourbon barrels. It smelt like Christmas, of cream and fudge and festive dried fruits. It was exquisite and if you wanted to buy me a bottle I’ll not stop you. If you ever find it you must try it. You must.

Who knew that tequila could be such a refined drink? Something you could sip in front of a log fire and savour like a good scotch. Just don’t eat the insects, just don’t.

Like Loading...
This entry was posted in Drink and tagged Don Julio, I'm a celebrity, Manchester, tequila. Bookmark the permalink.

2 responses to “Posh Tequila & Boaking on Beetles with The Liquorists”