Kitchens of the future – dystopian nightmare or dream come true?

I try not to think too much about the future, sometimes futural things frighten me, I suspect it’s because I spend too much time watching dystopian films and imagining the worst. Partly it’s a fear of change and partly it’s because I don’t think me and hoverboards will get on so well.

This week I read an article about kitchens of the future and whilst I was secretly excited about the idea of a robot chef, I have watched some of the current series of Humans and wouldn’t want it making eyes at my husband. That’s a real concern, he is a good looking lad after all. 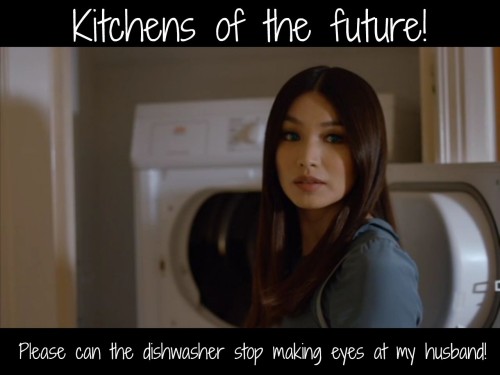 Don’t get me wrong, some of the things in the article sound pretty useful; such as general improvements in water and energy consumption. The kitchen is one of the most power hungry rooms in the house. I know our dishwasher and washing machine are on at least once a day, no matter how energy efficient our current models are, they are an expensive luxury.

What do I really need? The thing I hate most is tidying up, so I’d like a giant robot arm to come and put away everything I’ve got out and used while I was cooking and then give the work surfaces a good scrub so they’re clean for next time, maybe load and unload the dishwasher for me too.

One thing I’m terrible at is sorting the fridge out, so I occasionally happen upon something lurking at the back which is older, much older than it ought to be and then I have to bin it without getting any of it’s ‘juice of decomposition’ on the floor. Yes. Ick. A device to deal with that would be pretty good. Something to sort the fridge before Environmental Health get involved.

If I could have anything at all it would be a new fridge freezer. I know that’s nothing radical, but ours has been dying a slow death for a while now. It’s starting to become a bit of a health and safety issue, it’s my birthday soon so I’ll be asking for vouchers or money from relatives so I can replace it before it finally turns nasty and kills one of us!

In collaboration with Legal & General

This entry was posted in Blogs, Home and tagged Humans, kitchen, kitchens, kitchens of the future. Bookmark the permalink.