Over the half term we were invited to the Waterside Arts Centre in Sale, near Manchester to see The Three Musketeers show performed by Three Half Pints. Three Half Pints are a slapstick comedy duo who have been on several CBeebies’ shows including Spot Bots and Justin’s House.

The Three Musketeers is a hilarious slapstick adventure full of 17th century style chivalry, swordplay and suddenly falling over. Aimed at children aged 5+ it was a fine way to end the Whit half term with a flourish. We went along to see the show, Ben was unsure he’d like it as he was unfamiliar with the story, but once it began he was laughing his socks off and joining in in all the right places.

The story follows the adventures of Dick-tagnan, played by Richard Franklin and his Musketeer colleagues, Ernie (Robin Hatcher) and Derek (Callum Donnelly). All three of the half pints play a number of different characters during the performance, almost all of them silly.

The play which is just over an hour long with an interval is a glorious festival of slapstick comedy. It’s been a long time since I’ve seen slapstick like this and to be honest it’s good to have proper slapstick comedy back. The Three Half Pints are masters of slapstick and make it look so easy. Although I would have preferred a “don’t try this at home” before the show, rather than after. My son managed to copy one of their moves during the interval and it hurt!

The Three Musketeers show was genuinely hilarious. There is a bit of risqué banter for the parents too, but most of it went way over the kid’s heads. The Three Half Pints are a comedy trio to look out for in the future. They’re incredibly funny and we laughed hard throughout the whole show.

It was a great show and well worth catching next time they’re in town. 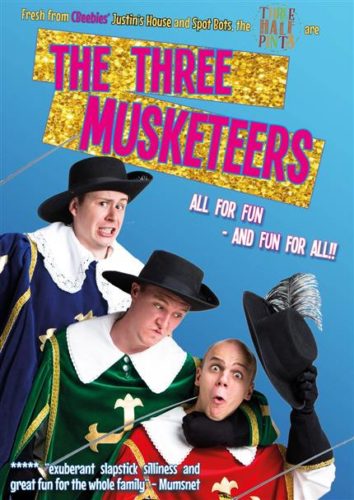 Click here for more information about The Three Half Pints including tour dates.

We were given these tickets for review purposes, all opinions are our own.