Crabbing and chips by the sea for Father’s Day

Often pictured but seldom heard, my long suffering husband Matthew has kindly written a guest post for me about what we did on Father’s Day. He’s not a blogger, nor does he have the soul of a poet. He is by nature a man of few words, so this is a rather big deal. Enjoy his tale of crabbing and the best Father’s Day ever…

Father’s Day this year happened when Team HodgePodgeDays were on their annual two week jaunt to Devon. It was nice to be able to have a Father’s Day to ourselves, rather than slaving away at home with a to-do list.

The day started with a very lazy Sunday morning at the cottage, playing in the garden in the morning sun. Eventually we got in the car and drove the few miles to Rosie’s kitchen in Bude for brunch; followed by a stroll on the beach looking for pirate treasure.

After we decided the pirate had taken the treasure with him, we headed back to the cottage for a pitstop and then sped up the coast to Appledore. Appledore is a beautiful village on one side of the estuary of the River Torridge and an ideal place for crabbing.

Unfortunately when we got there the tide was out. We decided to walk down the slipway onto the sands and ambled about looking at the boats resting on the sand and looking into the pools of water. Sooner rather than later, the tide started to come in, so we made our way up to find Mrs HodgePodgeDays, who informed us it was tea time.

So off to Sylvester’s Chip Shop I went and came back with the best cod and chips I’ve ever had. We gobbled the whole lot down sat on a bench on the harbour side; the late afternoon sun on our backs watching the world go by. It was a special moment.

After tea it was nearly time to go as it was nearly bedtime for the little fella. But we wanted to try our hand at crabbing. Seeing as though that’s why we’d come to Appledore. Mrs HPD proved herself a natural at crabbing, baiting the lines with bacon. We soon had a bucketful of crabs and a very happy boy. 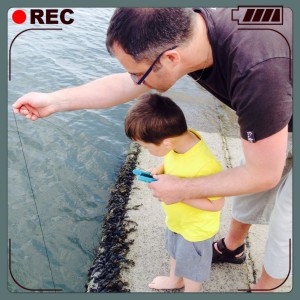 What a fantastic day we’d all had. The lad is going to have to come up with something extra special for Father’s Day next year!

Like Loading...
This entry was posted in Travel and tagged Appledore, Bude, Devon, Father's Day, Fishing. Bookmark the permalink.