What kind of gig goer are you?

I’m an irregular attender of gigs. Hubs goes to a few each month, but my wonky back means I struggle to stand for that length of time. I do have a gig bucket list (The Wonder Stuff and Shed Seven since you ask) but I love live music and you can’t beat the atmosphere of a sweaty gig.

Dance like no one is watching – in the mosh pit, dancing their heart out, singing every single word, carried away in the moment. This is usually me for at least a few songs, then I quietly retire to the corner.

Earnest loner – goes alone to gigs, stands in the middle, just watching, may tap his (usually his) foot. Quietly appreciative of the music.

The pointer – usually with his friends, singing along, but only to the three songs the band is famous for, points with purpose at the ceiling during a rousing chorus.

Gang of four – a group of friends, usually wrapped up in each other, they chat throughout the gig and like the pointers go a bit bonkers during the hit singles. Usually drunk by the end of the gig.

Smartphone fanatic – spends most of the gig watching it through their smartphone, might occasionally take pictures or video. Likes to experience life through a tiny screen.

The WAG – accompanying their menfolk, these women aren’t keen on the band but they’re doing their WAG duty and keeping their partner company. They’re often dressed for a glam night out and are unaccustomed to sticky floors and plastic beer glasses.

Chatterbox women – Groups of WAGs, really disinterested in the gig. Always stand in the least helpful place in the venue, their backs to the stage, loudly discussing child rearing (usually). Why pay a fortune for gig tickets just to shout loudly about nappy rash over a very loud band? I’ve seen this group actually shushed at gigs by bands (yay). 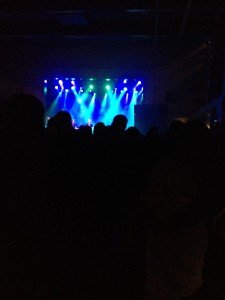 Now this might make me sound like I have something against everyone who goes to gigs, not at all, I love people watching and I love watching people enjoy live music, the gig goers on the edge of the mosh pit, dancing and singing and just loving every second. I love the people who know every word and every feeling behind each lyric and are completely engrossed in the love of the music, but can do so without annoying the hell out of everyone around them.

Hubs, the frequent gig goer, has confirmed that all of the above groups do exist and to some extent can impinge on his gig enjoyment. He often returns home saying a gig was good except for x, y and z.  If you’re wondering, he’s usually the earnest loner.

Keep up to date with the latest music news at GetToTheFront – an online music news site run for the fans, by the fans!

Like Loading...
This entry was posted in Blogs and tagged bands, gig goer, gigs, live music. Bookmark the permalink.

2 responses to “What kind of gig goer are you?”