Get Your Game Face On This Christmas

Like most families we’ve got a wii, originally bought for the purposes of making our bottoms smaller, since it was purchased it’s languished in a cupboard looking forlorn. That was until the boy discovered it, and to his eternal joy and amusement manages to go wii bowling with some success. There’s none of that wearing of other people’s shoes malarkey to contend with either. Result.

So what does Santa get the boy who’s got everything? Coming from a family of keen gamers (Tetris still counts as a game right?) we thought we’d have a little look at some of the new games consoles on the market. To be honest it’s time for an upgrade, Hodge is still playing with his ancient PS1, bless him.

Ideally we want something for Father and Son to enjoy together on rainy days and dark evenings when the park is somewhat less appealing. Luckily we have a room in our house, which we christened “the man room” which has manly stuff in it. We have plans to put a decent gaming TV and comfy chairs in there, so at least I can shut the pair of them away and have some peace. 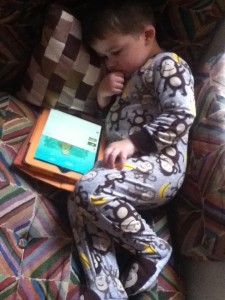 Both the new PS4 and new Xbox One are due to be released over the next few weeks and are the source of heated debate in this house. Whichever one we go for, it needs to have games suitable for my little monkey and his fractionally more mature father. It needs to be technically fairly easy to master. I’m not sure why I’m worried about that as he already knows how to work my iPad, plays lots of games and watches YouTube videos on Mummy’s “Tumble Tap”.

He loves my iPad, I did consider getting him a mini but it’s a bit solitary and I want him to play games with people rather than by himself. I’ve downloaded some educational games onto my iPad and they’ve been fantastic. They can keep him happily quiet if we’re ever out and about and need him to hush for a bit, like waiting at the Doctors or on a long, boring car journey.

We’re still unsure what to go for out of the PS4 and Xbox One, both look brilliant and pretty child friendly to use. With Angry Birds, Happy Feet and various dance based games to choose from there are game options for children aged 3+. If it was entirely up to me I’d go for the Xbox One as it has Kinect 2 which is a bit like the all familiar wii. But ultimately the boys get to choose.

I do like the idea of sprucing up the man-room in time for Christmas, I sense it’s going to be a long, cold winter so the boys will get lots of use from it. I guess as well as the actual games console and comfy, supportive chairs they’ll need a decent gaming TV and possibly a little beer/apple juice fridge.

I’ve looked into it a bit, asked some of my techie friends and they’ve suggested my best bet is an LED TV rather than LCD. Apparently the picture quality is better and that makes a real difference to the enjoyment of the games. I’ll need one with lots of HDMI outlets too, the more the merrier. My techie chum Ken (real name) suggested getting the best we could afford, something that ticks all the boxes and is a known brand like Samsung, Sony, LG or Panasonic. Sounds fair.

I think while we’re setting up the man room we ought to consider gaming headsets. Not only would they help keep the noise down for those not joining in with the Angry Birds game or whatever, they’ll apparently help Father and Son get fully immersed in the gaming experience.

Lots to think about, but I think sorting the man room out might be a very wise investment. Just need to persuade them to sort me out with a pamper room and everyone’s happy.

This entry was posted in Children and tagged Christmas, Christmas Gifts, games consoles, PS4, Xbox, Xbox One. Bookmark the permalink.