The young master of the household is obsessed with dinosaurs. I mean seriously obsessed! He generally wakes us up in the morning by roaring at us and shouting “dinosaur!” until we let him go downstairs and play with his toys. With this in mind I was super-excited (on his behalf) to see that Dinosaur Zoo is coming to The Lowry in October. 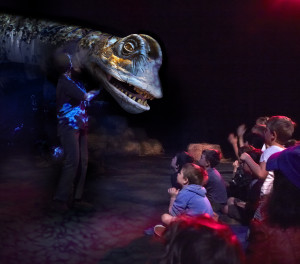 Dinosaur Zoo is an interactive dinosaur show for children aged 3+. Having watched the trailer it kind of looks like something the late, but wonderful Steve Irwin would have done if dinosaurs still roamed the earth. It’s an Australian production and the dinosaurs are very realistic, almost life sized puppets. The children (and adults) learn all about various dinosaurs as well as getting the chance to touch them, feed them and help the zoo-keeper out.

The dinosaurs range from cute baby dinos to teeth-gnashing giants, including a carnivorous theropod known as the Australovenator, based on the most complete meat-eating dinosaur skeleton found in Australia.

We cannot wait to go and rest assured I’ll be blogging about our Jurassic adventures when we get back. In the meantime I’ll just have to put up with even more roaring early alarm calls from the boy.