Days Out: Visiting The Blackpool Tower

As a child I spent a lot of time in Blackpool. Living in Manchester it was our nearest bit of seaside and we had family there, so it was a regular haunt. We thought Blackpool was probably the most amazing place on earth. We never really did the Pleasure Beach, but Blackpool Tower, with its beautiful ballroom, circus and million mile views was somewhere we seemed to visit quite a lot.

Over the Bank Holiday weekend we took the small boy to Blackpool. Our first stop was SEA LIFE Blackpool, which was brilliant. After we’d left SEA LIFE he was keen to hit the beach, but I wanted us to have a quick trip up the Blackpool Tower  before we all got covered in sand. 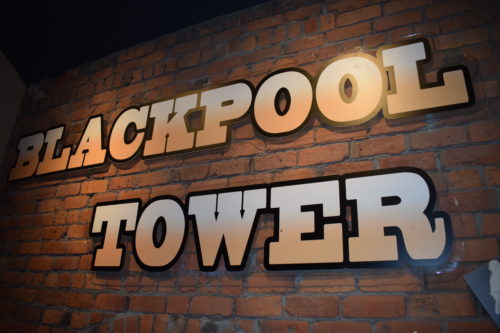 Although the Blackpool Tower is home to several famous attractions including the Ballroom, the tower circus, the tower dungeon and Jungle Jim’s, what we really wanted to see and do was the tower itself.

As Merlin Card holders we showed our cards and got into the lift up to the Blackpool Tower Eye. This is a fairly recent addition to the tower. The first stop was the obligatory before attraction photograph. I always say yes to having these taken out of politeness, but we never buy them and they always look awful and/or really unnatural. The people in front of us declined, so we decided to as well and we were just waved through.

We joined a short queue for the 4D cinema experience. There are no seats in this cinema, so be prepared to stand for the short showing. The short film shows you the history of the tower and is a whistle-stop tour/flight around Blackpool complete with wind through your hair and foamy bubbles being blown at you. I found it quite exciting, the small boy wasn’t quite as keen. I think he was a bit nervous about going up the tower. 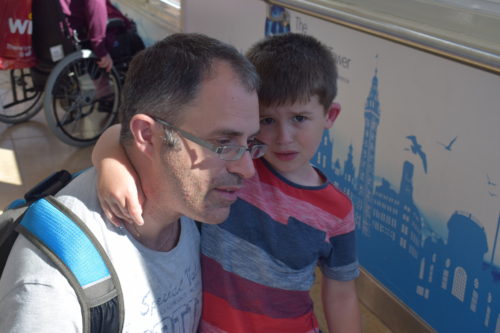 Once you’ve watched the film you join the queue for the lifts up the tower. We had already decided to stay on the glass SkyWalk platform rather than climbing the stairs to the top. Both of my boys are a bit windy about heights and we thought we could go back another day and push it a little bit further with them.

They were very brave and both eventually managed to step out onto the 5cm thick glass. To be fair, the tower is 380ft tall and it is very strange standing on glass and being able to see all the way down. 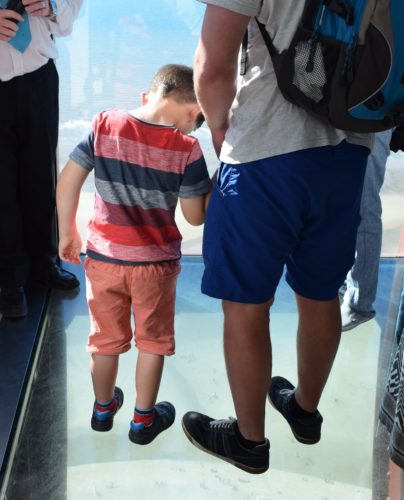 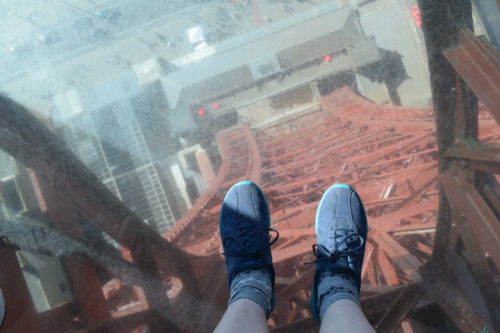 I wonder how they clean the windows

It was a gloriously sunny day, the sky was a beautiful blue and you could see for miles and miles. On a clear day you can apparently see the Lake District, Liverpool and across the Irish Sea to the Isle of Man. 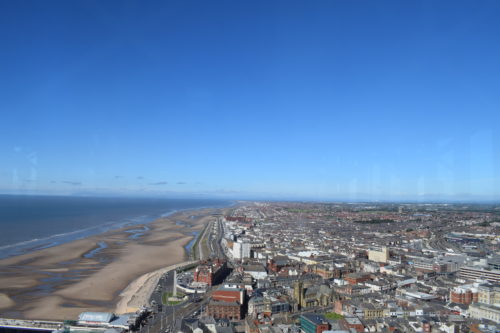 We spent quite a bit of time walking around on the SkyWalk platform, admiring Blackpool and beyond from all angles. We talked about going even higher up the tower, but we decided to leave that for another, slightly braver day.

I would have liked to have spent more time exploring the attractions at the tower, but the boys were very keen to get on the beach, but we will be back another day soon for a proper look around.

This entry was posted in Days Out and tagged Blackpool, Blackpool Tower, days out, holidays, Merlin, Reviews, school holidays. Bookmark the permalink.

2 responses to “Days Out: Visiting The Blackpool Tower”