The Just So Festival has a very special place in our hearts. This year was our third year, but our first year of camping. We’ve never camped before as a family, so we knew we were in for an adventure. Mix that with the magic of Just So and we managed to make a million memories and several hundred smiles, which was just what the doctor ordered.

We arrived on site on Friday afternoon, the festival was just beginning and as we pitched our tent in the Accessible Camping area, the heavens opened and we got our first soaking of the weekend. The folk at Just So aren’t easily put off having a good time, so I was sure rain would not stop play, and it didn’t. 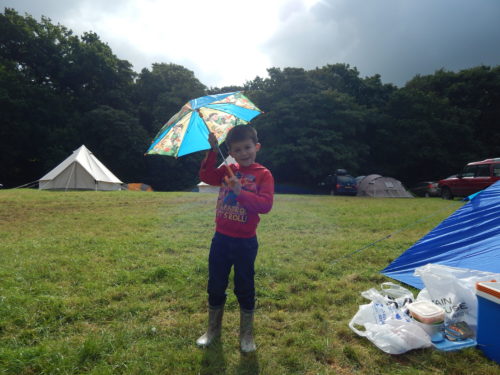 There is so much to do at Just So. There are fixed areas like the Spellbound Forest (a forest with a campfire, a small hidden theatre and lots of activities and crafts happening all around); The High Seas with it’s travelling barn of merriment, huge pirate ship and sandpit, lantern making and more. As well as areas like the Village Green, Peekaboo (a tent village for babies and little ones), The Social, and brand new for this year, Tales of Animalia – a theatre hidden in the woods. As well as the Jitterbug Tent, Head Over Heels, Footlights and The Observatory. 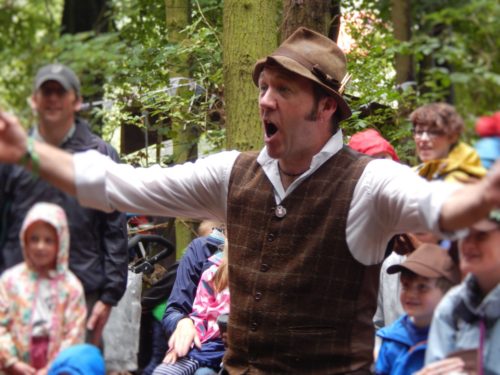 Before we arrived we were sent a programme of events and I dutifully highlighted all the things I fancied, knowing that I would probably largely ignore my plans and just go with the flow, which is exactly how things should be.

We explored the site, grabbed a few things to munch on for our tea, waved goodbye to daddy (he had to go home but promised to be back the next day) and we headed into the Spellbound Forest to listen to the Just So legend which is Ian Douglas and then take part in some singing around the campfire with Ian Mackintosh. The Campfire Song sessions soon became a firm favourite of ours, so we took part with gusto all three nights. 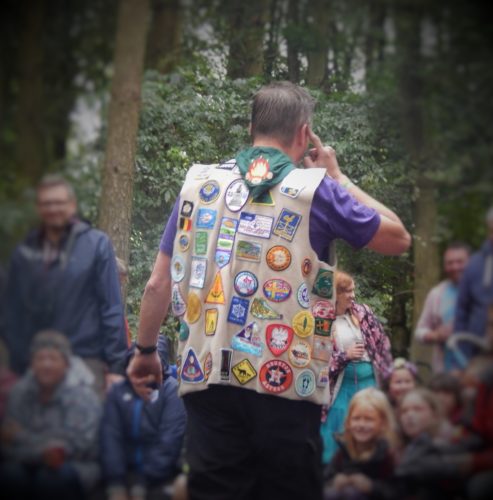 Throughout the weekend the early evening around the campfire sessions also included the exuberant David Gibb, Geoff Bird and terrifying and amazing (in equal measure) scientific experiments from the fantastic Dieter Wadeson.

We woke up on Saturday to a smattering of sunshine. Daddy returned and we headed off to explore. We headed straight for The High Seas to watch a performance of the laugh out loud “Shark Legs” and then for a quick play in the pirate sand pit. We walked through Sailcloth City – an avenue of sailcloth, with sailcloth dens and passageways to explore, and went to look at the lake. It was raining fairly hard by this point, so we watched the rowing boats on the lake for a short while and headed off to find some shelter. 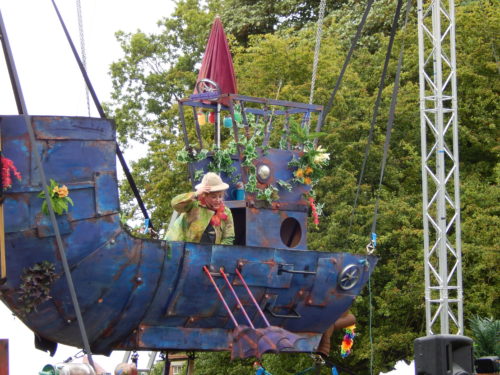 One of the things I was most looking forward to was Les Enfants Terribles – The Fantastical Flying Exploratory Laboratory. Sadly we missed the first few minutes, struggled to get a decent spot to watch it and the sound wasn’t that great, so we did struggle a bit to keep up. The small boy climbed on my knee and we huddled together in the drizzle and watched the show. The performers bravely continued through the showers and we giggled at the madcap antics of Les Enfants.

After the performance we headed back to the relative shelter of the Spellbound Forest. We watched as willow was woven into beautiful creations and nearby children were toasting marshmallows on the fire. 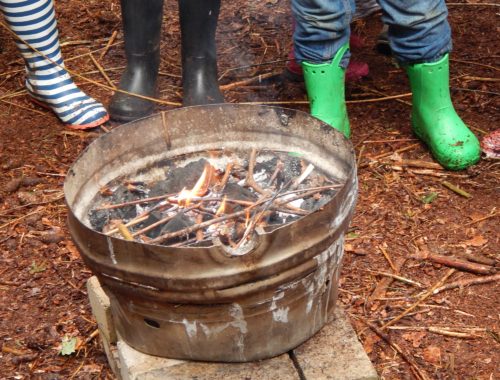 Out of the corner of my eye I spied a creature with terrible tusks, and terrible claws, and terrible teeth in his terrible jaws. Oh help! Oh no! It’s a Gruffalo. A very friendly Gruffalo who was very happy to meet all the children. He is a Just So favourite and it wouldn’t be the same without meeting him in the deep dark woods. 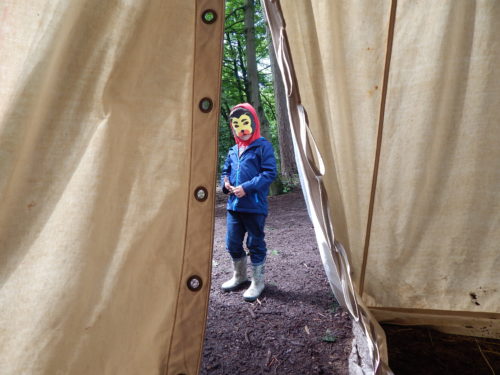 I managed to persuade the small boy to visit the Theatre for One in the Spellbound Forest. In the middle of the wood, under a canopy were six miniature theatre shows, each for one or two viewers. He settled down and watched a short puppet show about a mouse in a house and then watched an artist who painted his portrait, this is something which he loved. We are only sad that we didn’t managed to see all of the different performances over the weekend, but they were incredibly popular.

I was very keen to make a clay face, throughout the forest the trees are adorned with clay faces people have made. I watched the introduction by Barefoot Ceramics, then I look my lump of clay and made a lion head (with some additional help from the small boy). I had lots of messy fun with this and it’s something I’d like to do at home on one of our trees. 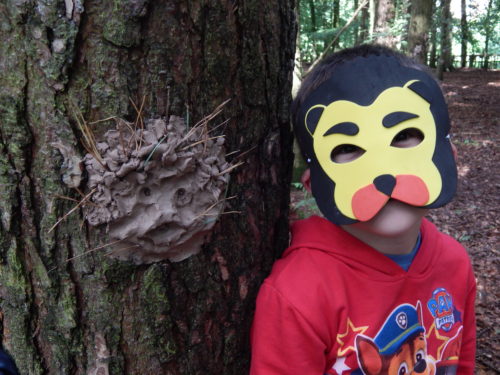 Another on my must see list were the Baghdaddies. I’ve seen them play live before and I adore them. They toured the festival playing their vibrant, upbeat, infection music, drawing everyone in like musical Pied Pipers. I really do suggest that as soon as you’ve finished reading this you go check them out on YouTube. 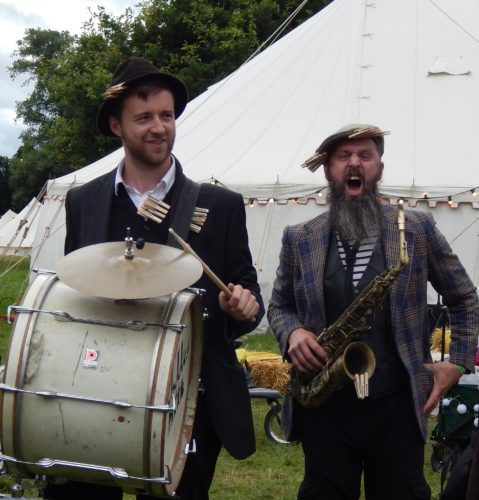 A wander through the woods to the Tales of Animalia area found us watching a very popular performance of Reynard the Fox. The boy was enchanted by it and was very excited to meet the performers afterwards. They were excellent, really chatty with the children and very happy to take photos. Later on that weekend we spotted Cyclops and his naughty flock of sheep making mischief around the festival site. It’s the never quite knowing what weirdness and wonder might be round each corner which makes Just So so special. 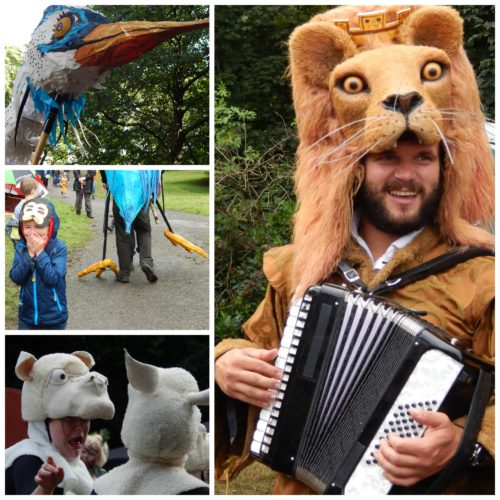 The food and drink at the festival was of an excellent standard. We ate incredibly well and it wasn’t outrageously expensive either. My festival favourites were the steaming cups of amazing hot chocolate (to keep me warm) and the corn on the cob. Things so simple but utterly delicious. We did spend a lot of time carefully choosing what we would eat and then each of us having envy over what the other had. There was lots of different types of food to choose from and lots and lots of choice for veggies and vegans which pleased me greatly. It was good to have a choice and not just an option. 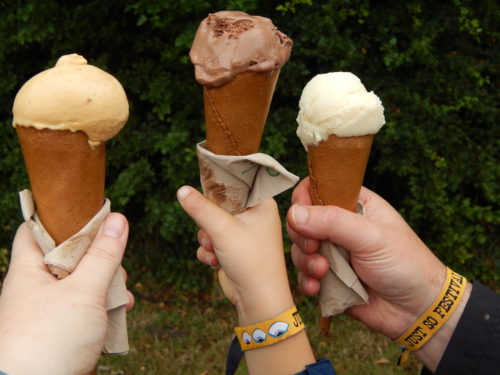 It rained a lot over the weekend. It could have made us all miserable but in many ways we hardly noticed it. The muddy paths were managed so they didn’t become dangerous. I didn’t slip once. The festival toilets were quite nice (compared to the horror of festival toilets I remember from the 90’s).  Just So was relatively small and friendly with a really lovely chilled and happy atmosphere. I think I would live there if I could. 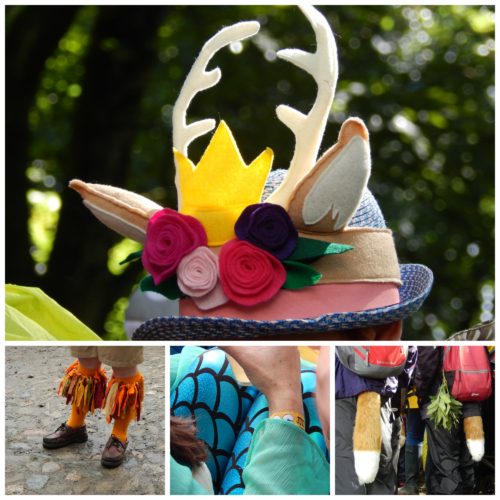 We had a really magical time at Just So. We’ve had a horrible few months and spending off the grid time together, doing and seeing weird and wondrous things has done us a lot of good. It’s helped build confidence, expand horizons, it’s made us laugh and (me) cry a little, but in a good way. It was without a shadow of a doubt the highlight of our summer, perhaps even the highlight of the year.

If you can only go to the Just So Festival for the day, do it. But if you can go for the weekend, then you really should. It’s magical.

2 responses to “Just So Festival 2016 – A Magical Family Festival”