Like most boys born in Manchester, my son has grown up with a football at his feet. He’s not a natural-born striker, but he enjoys having a kick-about in the park and it’s nice to encourage a love of sports at an early age. This month he joined the Little Sports Coaching Mini Soccer programme in Manchester where he hoped to learn a few new skills to show off in the park.

Little Sports Coaching launched in 2006 as a sports coaching organisation.  They work in nurseries and primary schools; run soccer schools, multi sports, dance and gymnastics classes, holiday camps, one to one coaching sessions, children’s parties and even have their own junior football team. 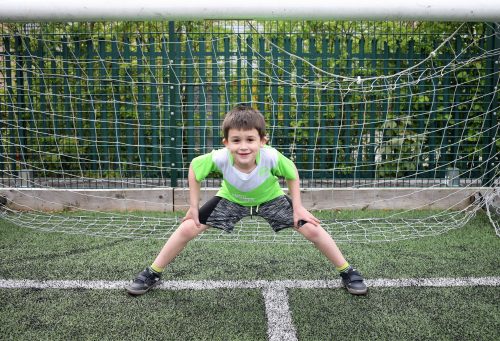 My son has trained with them before at school; so he already knew some of the coaches when he arrived at the Manchester Health Academy in Wythenshawe, Manchester for his first session. They were really welcoming and gave him his own brightly coloured kit (it’s very bright, so there’s no losing him in a crowd when he wears it).

He got straight in with a warm-up kick about with the other players in his group. There were about 8 children in each group and when the weather isn’t terrible they get to play outside on the astroturf. Some of the kids were amazing and obviously had been attending for several years. Ben got stuck in and made sure he was near the coach, listening and paying attention to what he was told to do. 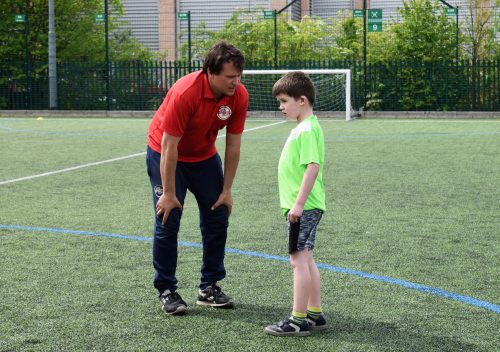 During the Mini Soccer programme players learned a selection of skills including dribbling, passing, shooting, heading and much more; plus each session includes taking part in five-a-side football matches to practice those skills.

The Mini Soccer sessions last for two hours with a short break in the middle. A bottle of water is essential and players are encouraged to bring a snack to eat such as fruit. Although kit is provided, players will need comfortable trainers or football boots if they’re playing outside.

Parents don’t have to stay for the sessions, but you can do if you’d like. I’ll be honest and say we slipped away for half an hour to pick up a few bits from a nearby retail park. He was busy concentrating and probably didn’t even notice we’d gone. 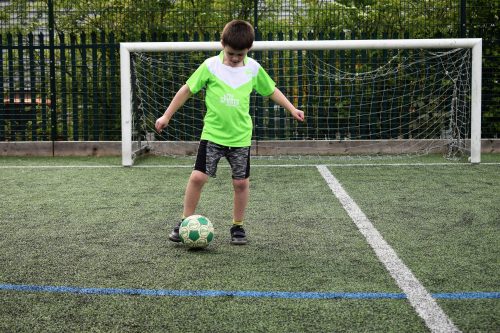 At the end of each session the coaches award a player of the week trophy for a player who has shown improvement; or who has tried extra hard, listened well or been a good team player. The trophy is kept for one week and when it’s returned the player gets a certificate to keep. It’s a nice little motivator to do well.

The coaches are engaging, encouraging and professional. You can tell they really enjoy helping to coach these young players. It’s clear from sitting on the sidelines for a few hours that the kids love the sessions too. There’s something special about watching a group of kids form a team and play together; watching them learn new skills and grow in confidence too.

Two hours of football is quite a lot to ask my son to play on a hot June afternoon. He does flag a bit towards the end; but the rest of his team are all still running about and picking up any slack he leaves.

He’s had three training sessions with Little Sports Coaching now and he really enjoys going. When he gets home he’s hungry, thirsty and tired, which is how I think it should be. He’s had a good run around and learned some new football skills. He’s learned quite a lot of other things too; like teamwork, listening skills, he’s concentrated on what he’s doing and what he should be doing and most of all, he’s had a lot of fun doing it. Isn’t that what taking part in sports is really all about? 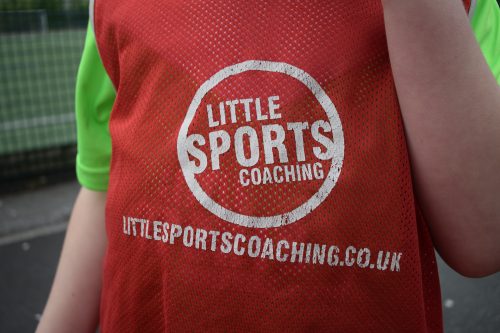 Little Sports Coaching offer a wide range of sports coaching including football, dance and multi-sports across Manchester and the North West. Each session of Mini Soccer costs £6 which for two hours worth of coaching is excellent value.

To find out more about Little Sports Coaching, visit their website www.littlesportscoaching.co.uk/mini-soccer.

Disclosure: We were offered four Little Sports Coaching sessions and the kit in exchange for this review. All images and opinions are our own.