How accurate is my Fitbit?

A couple of weeks ago I got the news that my spine was pretty much crumbling and I needed to lose weight to slow down the deterioration. I’ve pretty radically changed my diet, but I am limited in the kinds of exercise I can do. I decided to buy a Fitbit Charge. I wanted to get a baseline of my current (in)activity and use it to build on that. I’ve worn my Fitbit, an activity tracking device for just over a week now, but just how accurate is my Fitbit?

My activity tracking device is a Fitbit Charge. I paid for it myself and it cost £99.99. I needed a new watch anyway so I thought the Fitbit Charge would be a good multi-tasker as it comes with a watch and measures your step count, kilometres walked, estimated calories burned and flights of stairs climbed. You sync it with your phone or tablet (mine is linked to my iPad) and the app tells you how you’re getting on. If you wear it overnight it also measures the quality of your sleep and has a vibrating alarm which you can set to wake you up. I have a four year old so I have no need for any kind of alarm ever. 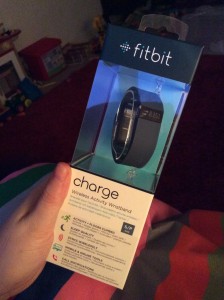 Quite quickly I noticed a number of accuracy issues, here’s a bit of a breakdown;

So I think my Fitbit isn’t as accurate as I’d hoped it would be. Additionally when it tracks my sleep I think that it is very inaccurate. The sleep tracker tells you how long you slept for, if you woke during the night and how restless you were. For a few nights I’ve been concerned that it wasn’t accurately measuring my sleep, generally when I knew I’d had a terrible night and it told me I’d had a good 7 hours. 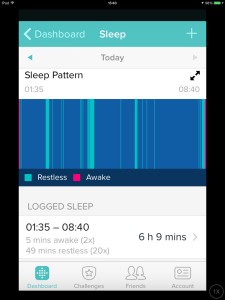 My terrible nights sleep where I was active for half an hour which was recorded as ‘restless’ not as awake.

Last night the small boy wet the bed at 4am so I got up to deal with it, changed him and the bed and put him back to sleep, pausing to nip to the loo myself. I checked the time using the Fitbit (you have to press a button), before falling back into my bed exhausted. I was surprised this morning when I checked the sleep tracker that it told me I’d had a fairly good night and I’d only been a bit restless around 4am.

I then found this article on the BBC website about activity trackers being inaccurate, it makes for interesting reading. Essentially activity trackers generally aren’t that accurate, but the manufacturers are suggesting that we use them to monitor patterns of activity and sleep behaviours, and that variations in algorithms and the physical characteristics of the individual wearing the device, like height and gait, as well as wearing position, can result in accuracy differences.

That makes perfect sense to me, I need to stop obsessing that it’s inaccurate but use it to motivate me to do better. There are days I know I will be walking more, so mentally I set a step target to hit that day, the Fitbit will help me achieve that, even if it’s not strictly accurate. It all adds up and it all helps towards my ultimate goal of health and well-being.

So would I recommend the Fitbit Charge? Well yes, the app is a little buggy and as I’ve mentioned it’s not 100% accurate, but if you’re after a ball-park figure of what your activity level is it’s a good piece of kit. I think it’ll do the job for me, which is basically to motivate me to move around a bit more.

Do you have a Fitbit or other activity tracker? How are you finding it?

Like Loading...
This entry was posted in Health and tagged activity tracker, exercise, fitbit, fitbit charge, how accurate is my Fitbit. Bookmark the permalink.

3 responses to “How accurate is my Fitbit?”