I was in a shop this morning when I spotted a cute purse in the shape of a foxes face, it was only £2 so I bought it for my son. He is four and doesn’t get pocket money, nor do we intend to give it to him until the sheer weight of peer pressure is so great we can no longer fight it. Despite this he is starting to understand that money is important and that we use it to buy things. I thought it was high time he had his own purse to put in the money which other people sometimes give him.

I gave him £1 to start him off and his Dad gave him a few other coins. Over the next few weeks we’ll be talking about what the different coins are and their value and what you can buy for that, but really he’s just interested in going to a shop and swapping some of his money for some sweets, which is something we’ll be doing with him this week.

When I was growing up I used to get 50p pocket money each week from my Grandma, some of which I’d spend at the corner shop (in the days where you could still buy sweets for 1/2p) and some of which I would save. Saving is a really great habit to get into, I was a compulsive saver and the money I saved from when I was as young as 5 helped me during the lean times at university and beyond.

I still save today, as much as I can, it’s very little really but it’s a habit I can’t break but I know I will be grateful for when I come to the end of my working life. I’d love it if I could get him into the saving habit, but first things first, he needs to understand more about what money is and its value. I’ll let you know how that goes! 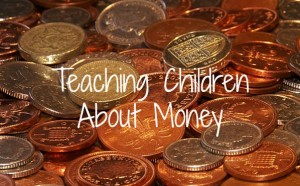 If you’re looking for lots of useful information on financial education, investments and money management you could visit the WealthWithin website to find out more there.

2 thoughts on “Teaching children about money”