Since I was 12 we’ve had a dog. I can’t imagine a house without a mutt traipsing around after me, getting in my way, or leaning on my leg when I’m sad like they know and understand. I love dogs, dogs are where it’s at. All dogs are characters and characterful, but all our dogs have really helped shape our lives.

My first dog was Tess. A boxer/staffy cross. She was full of beans and twice as bouncy. Not great around little kids as they only encouraged her rambunctiousness, but with me and my younger brother she was an absolute star. She was so protective of us and looked a lot tougher than she actually was, a great deterrent for ne’er do wells when we were walking her alone.

I was 23 when she died, she had cancer and had to be put down, but she was a real beautiful, belter of a dog and she’s still missed.

About six months later Sam came into our lives. Sam again was a boxer/staffy cross but with a bit more staff and a bit less box than Tess. I’d left home by that point and she was my parents dog, but we took a real shine to her. She was a bit too energetic for a couple on the slide towards retirement, so she came to live with us. 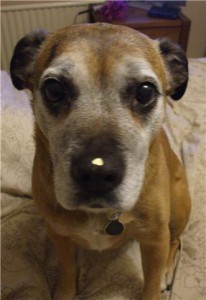 During the days she would accompany my husband to work, the evenings she’d spend snuggled on the sofa with me. She genuinely was one of my best friends, she always knew when I needed her. She was forever curled at my feet and always woke me by sticking her cold nose against the back of my knee under the covers and giving my leg a gentle lick.

In 2010 I fell pregnant. Sam was to all intents and purposes my baby and had been since she moved in. We knew having a rival in the house would be difficult, but we underestimated just how put out she would be. When we brought Benjamin home in November 2010 she moved out that same evening. For her it was hate at first sight.

We tried for months to assimilate her back into the house but she wouldn’t have any of it. Reluctantly she moved back in with my Dad and lived with him until her death. My Dad enjoyed having her around now that she was an older dog set in her ways. It seemed and was the most logical thing to do. We could still see her and spend time with her, but we weren’t putting Benjamin in any danger.

Thankfully as soon as Benjamin found his feet, began toddling and looked like an actual human being rather than a strange, alien crying thing, her mind was changed. She fell as in love with him as we did and the feeling was mutual. The boy and dog were best friends. We’d even get a growling at if we tickled him, she was so protective of him.

Benjamin was obsessed with her now and they’ve been best friends for until she died in 2014. Right until the end she was in love with Benjamin. He loved to look after her, fill her water bowl, feed her and brush her. When she died it was Benjamin’s first bereavement. Sam had gone to live in a farm in heaven. He was sad, but that’s part of life and an important part of what pets can teach children.

In December 2016 Penny burst into our lives. A hairy whirlwind of chaos. She was not the staffy/boxer cross we’d always gone for, but she is a cocker spaniel, springer spaniel cross. Something new and very different. It had been 15 years since I’d last had a puppy and I’d forgotten how much hard work they are. They’re worth it. She is worth it. But they take a lot of looking after, much more so than a sedate old dog who knows their place. 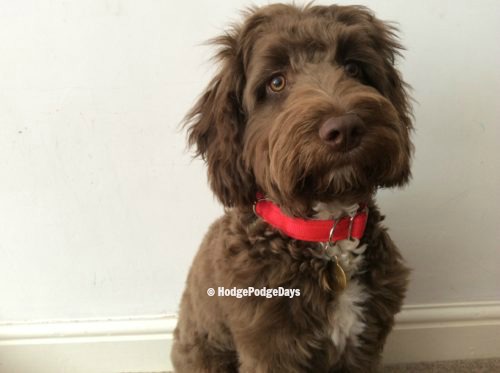 Penny is 8 months old now, she’s starting to calm down a little bit (a very little bit). She is Benjamin’s best friend. She’s learning when I need a cuddle and I’m learning when she needs one too. She goes to work with my husband a few days a week. She likes to sit looking out of his window and when the mood takes her she gets paper out of the bin and shreds it for him. She’s helpful like that.

I’m so glad we’ve got another dog in the house, she’s great company for us all, and a decent excuse to get some exercise.

Tess, Sam and Penny are three waggy ladies who have had a joyous, wonderful, enriching impact on our lives and I know Penny and Ben will grow up together being the best of friends.

Like Loading...
This entry was posted in Pets and tagged boxer dogs, children and pets, dogs, pets, puppies, puppy, sprocker. Bookmark the permalink.