The small boy is currently obsessed with animals. Animals which roar, growl, squeak or go ooh-ooh are particular favourites, almost as exciting as those animals with long necks who eat the leaves from the tops of the trees. It is with some regret that we don’t actually live on a nature reserve and we have to make up for that by using pictures, videos and our really wild imaginations.

You might’ve heard that we’ve made it to the final 21 to become Bigjigs Play Patrol Agents. Everyone on the shortlist gets a toy to review and luckily for our little jungle explorer we got the Bigjigs Wooden Safari Animal Building Blocks. 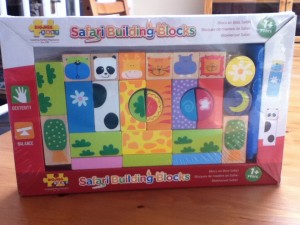 The Bigjigs Wooden Safari Animal Building Blocks are for children aged 1+, I did worry that at the grand old age of 3 he might be a little old for them. I was wrong, you’ll see why later.

There are 32 brightly coloured blocks in the box, some are plain, some are coloured, some have plant and tree designs on them, but the best blocks are the component parts to build a simple giraffe, lion, tiger, bear, hippo and panda. They each have a body and with superb attention to detail, the giraffe has an extra block for its neck. I thought the animal head blocks were fun, with one side showing its face and the other side showing the back of the animals head.

I liked the selection of blocks. I liked the different colours and patterns which we talked about with the small boy (see, educational too). I liked that you can mix and match bodies and heads to create your very own beasties. The blocks were good quality with smoothed, rounded edges and corners and a durable painted finish. The blocks are handily supplied with a bright blue drawstring bag to keep all the blocks together. 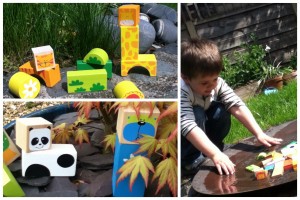 On the day we got the blocks it was inexplicably sunny (for Manchester), so we took the blocks into the garden to play with. Our garden is famous for its jungle like properties, i.e. the grass needs cutting and it has it’s own watering hole (water feature).

We decided after a long journey and being cooped up in a box for a while, the animals must be thirsty, so we took them to the watering hole. We enjoyed creating the scene and talking about how thirsty and tired they must be. Once they’d been refreshed we ventured into the jungle to see what was lurking in the trees. The giraffe looked hungry so he started munching on the leaves while the tiger watched. There was lots of tiger growling from the small boy.

Hiding in the trees we found the shy panda and another growly creature, the bear. They were having a chat about what they liked to eat. The panda was unhappy about the lack of bamboo in our jungle garden and the bear was displeased we didn’t have any spawning salmon. You can’t please all of the bears all of the time…!

The small boy then decided to put all the blocks in a circle around the watering hole. We asked him to describe each block as he picked them up, see, we’re always learning, but mostly having fun. He then decided they were dirty (they weren’t) and threw them into the watering hole for a wash. This is where we discovered how durable the paint was. 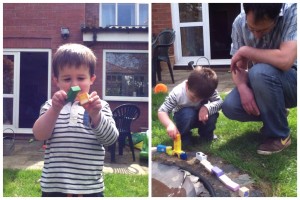 Once the animals had been rescued, it was time for them to have a sleep in their special blue bag, so we dried them off and put them away.

Like I said, I was worried they’d be too young for him, but they weren’t. I think these blocks are the kind of toy which can grow with a child. Helping younger ones with their dexterity and co-ordination, and for older children, with colour and shape recognition, as well as helping to spark their vivid imaginations.

We had lots of fun with these blocks, they’ve started a million conversations (and hasty Wikipedia searches) about what animals eat, where they live and what they do. We’ve played with them simply and created complex fantasy worlds with them.

The Bigjigs Wooden Safari Animal Building Blocks are a lovely toy for babies right through to pre-schoolers. They’re thoughtfully designed and we loved using our imagination to bring the blocks to life. They’re just £11.99 and I think good value for a quality wooden block set. If we could change anything, we’d probably add a monkey, but the monkey wasn’t massively missed with all our aping around.

Disclaimer: We were sent the blocks by Bigjigs free of charge to review as part of our application to become Play Patrol Agents. Our reviews and opinions are always honest and a true reflection of our experience with the product.