The small boy gets a letter from Santa

I’ll be honest with you, there have been times this year when we’ve wondered if the small boy had made it onto the naughty list or not. Then this week an envelope arrived addressed to him, it was akin to opening his exam results. It was a letter from Santa Claus, we tore it open and sure enough he’d made the grade, as long as he was good for the next few months, he’d get the Bigjigs train station he’d had his eye on. Phew. 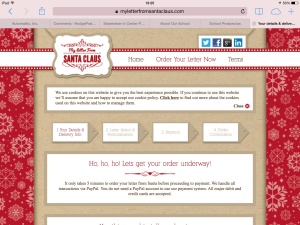 The thing is, Santa is a busy man, so sometimes mummy has to lend a hand. I visited the My Letter from Santa Claus website so I could help the big man send a letter to the small boy.

I selected the premium letter which contains a personalised Letter From Santa Claus, a personalised Nice List Certificate and a ‘Santa Stop Here!’ colour-me-in poster. The premium letter costs £5.69 and includes free delivery (presumably by elf-mail), the website is really easy to use. You just pop in the information they need to create the letter, so child’s name, address, best friend, what they’d like for Christmas and any big events that’d happened this year, in our case starting school. 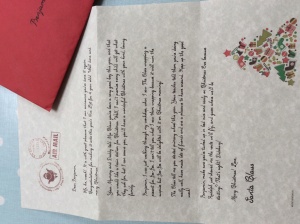 It took no more than 10 minutes from start to finish, and that was with me checking and double checking the details I’d input for typos and such like. It was incredibly simple and I think a lovely thing to order for delivery at the start of December, to start building festive excitement levels.

The envelope arrived (and cards on the table, I’ve not actually shown it to him yet, I’ve opened it carefully, read it, got a bit excited about Christmas, then tucked it in a drawer for opening nearer the time) and it was most impressive. His name written with a flourish on the envelope which had been sealed with red wax with a glittery snowflake from the North Pole.

Inside was a lovely colour-in sign which we’ll love doing in December, a certificate confirming he was on the nice list (evidence of good behaviour required up to and including Christmas Eve) and the letter itself. The letter is nicely written, chatty and full of personal information, I can’t wait to read it with him come December.

I think the letter from Santa Claus is a really lovely thing for a child to receive during the run up to the festive season, it’s nice to get a letter from the big man himself just so you know you’ve not been forgotten, and it’s also a reminder that their behaviour is being monitored at all times by Santa and his helpers.

The company who produce the letters (on behalf of Santa, everyone is outsourcing these days) are a very small, family owned business based in Hertfordshire. They offer beautifully personalised letters from Santa that parents can order online. Letters are available for delivery in the UK, Ireland and USA from the website. 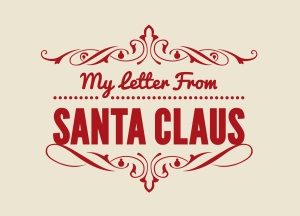 Note: We were sent to premium letter from Santa free of charge for review purposes. All opinions are my own.

This entry was posted in Review. Bookmark the permalink.

5 responses to “The small boy gets a letter from Santa”