I’d never heard of Heroes of the City before, but when I was approached to review their app and I had a quick Google, I knew it was probably something we needed to investigate further. As I’ve already mentioned in approximately 300 other blog posts, we love a vehicle in this house. Splodge is nothing short of obsessed and was nee-nawing at ambulances long before he uttered his first real words.

As soon as I saw what Heroes of the City looked like I knew he’d love it. For those not in the know, Heroes of the City is a cartoon about rescue vehicles in a small town where everyone can be a hero. You can follow the exciting adventures of Pauli Police Car, Fiona Fire Engine and Calamity Crow as they help the townspeople find thieves, put out fires, and solve some of the mysteries that happen in the otherwise quiet town. Heroes of the City is all about friendship, the stories are warm, lovely and focus on co-operation and helping each other out. 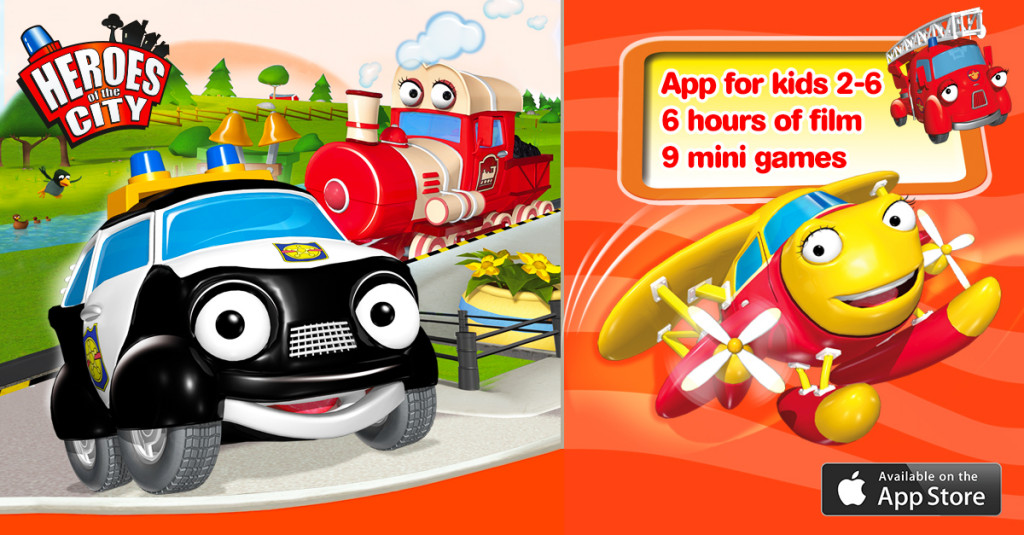 The Heroes of the City app is currently free to download from the App Store or GooglePlay. Like any app it was quick and easy to download. I had a little explore myself before I handed my trusty iPad over to Splodge and I was quite pleased with the app. It features…

The Heroes of the City app is aimed at 2-6 year olds. Splodge is three and I think that it’s about right for him, though it does work on different levels so there will be things he can grow into. He already plays with a few apps on my iPad and he can easily navigate his way around them. The apps we’ve already got he enjoys but they’re a bit limited, they have maybe one or two games. He likes them but he’s played with them for a year now.

I showed him the app but I’d maybe caught him at the wrong moment, he had a little tinker and then wandered off. A bit later that day I left the room, leaving my iPad on the sofa, I returned and he had opened the app and was watching one of the cartoons. So I sat with him for a little while and we watched it together, then opened up the games and we explored them.

We’ve had it about a week now and I cannot leave my iPad unattended without him leaping on it and opening it up. It’s something that we snuggle up and can play with together, it’s a colourful, well designed app. It’s glossy and expensive looking and is somehow free. This baffles me because it’s packed full of great content.

I’d be really happy to pay for the app as there’s so much in it. Not only that but if you go to their website they have a range of downloadable activity sheets and stories available for free. It’s well worth a look.

If you’ve got a child who like Splodge enjoys a vehicle then do check the heroes of the city app out. It’s fab, it’s fun and best of all it’s free!

Disclaimer: We were sent a link to the heroes of the city app to try for free; however it is freely available to anyone who wants to download it via the App Store or GooglePlay.