A funny thing happened to me over the weekend. In an idle moment I went to search my Twitter username “HodgePodgeDays“, it’s something I do occasionally just to see if anything comes up that I haven’t been directly @’d in. As I got to the end of the username another account flashed up with  my logo, so I clicked on it and found my account had been cloned. They’d stolen my logo, the background which includes a picture of my four year old son and my bio which reads “Lifestyle & Parent Blogger, Copywriter, Writer for Hire & Occasional PR”, and my Twitter name was almost identical, with just a couple of the letters transposed – I was livid! 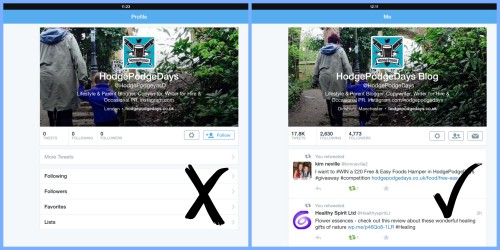 Naturally I had a bit of a panic. Who would do this and why? For what nefarious reason have they done this? Some suggested it was to blag “free” things from PRs using a similar name, maybe it was to send spam to people, maybe there was another reason. I’ll never really find out. I’ve spent over two years building my Twitter profile, making friends and establishing myself as a blogger and they were attempting to capitalise on this. I was angry.

I checked out the Twitter support page and filled out a report, citing that someone was impersonating my account. They sent me back this email… 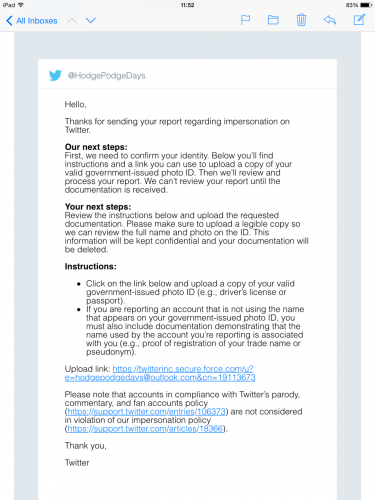 I then spent several days checking occasionally to see if the copycat account was still there. It was. The bloggers in the North West Bloggers group were brilliant, some reported the account as spam, I think most checked to see if they’d been copied too, a few found that they had and reported it to Twitter too.

Twitter had given me a report number, but for the life of me I couldn’t find a way to check the status of my report – which I think is a bit of a flaw in the system. In the meantime friends continued to report the account on my behalf as spam and I began to lose what little faith I had in Twitter to do the right thing.

This afternoon I finally got an email from Twitter, they’d suspended the account, specifically for being a spam account, which seems a bit odd, but at least it’s been removed. 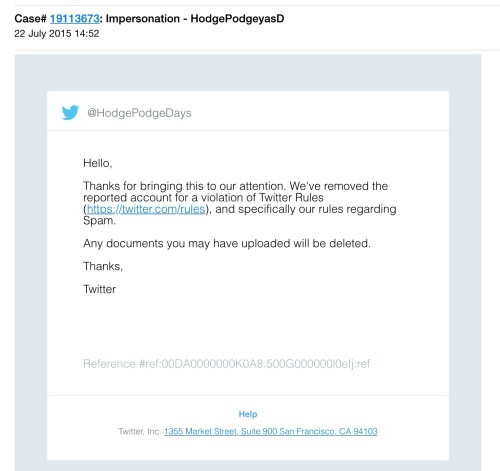 Going forward I’m going to be more aware that this kind of thing happens, I never really expected it to happen to me. I think it’s made me more aware and I’ll be looking out for copycat accounts on behalf of my fellow bloggers from now on.

It was a faff and a worry, but hopefully that’s the last of it. Keep your eyes peeled folks – there’s a copycat about!