I was invited on a zoom tour of Elizabeth Gaskell’s House in exchange for a review. All images and opinions are my own.

In just 12 short months, Covid-19 has changed the way we live in so many ways. Previously I’d been entirely unable to work from home, I was fairly allergic to Zoom calls and wearing a mask was only something bank robbers ever considered.

Whilst it has been the most horrific year in living memory, the rise in the popularity of Zoom has meant that we’ve been able to explore places and do things we may never have thought of doing before. 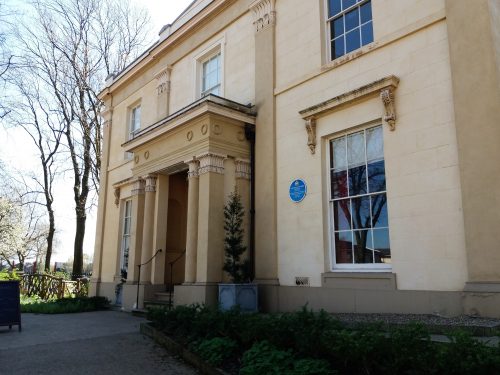 One evening last week I took a virtual tour of Elizabeth Gaskell’s House, and because we could Zoom in from anywhere, I was joined by people from far-flung places like New Mexico and Missouri in the USA, Australia, the Netherlands; as well as Sheffield, Sale and Stockport.

Elizabeth Gaskell was one of the UK’s most important Victorian authors. She wrote a number of novels including Mary Barton, North and South, Cranford and Ruth. In 1850, she and her husband William and surviving children moved to this beautiful villa on Plymouth Grove in Manchester. In this house she continued to write and play host to some of the most famous literary names in the Victorian age. 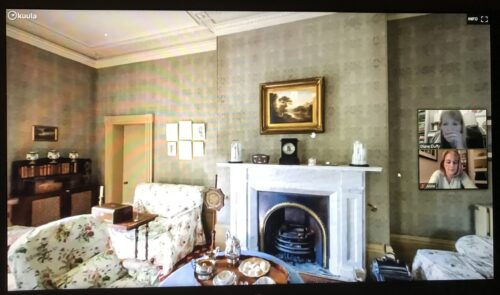 After Elizabeth died in 1865, the house on Plymouth Grove remained in the Gaskell family until 1913. It then stood empty for many years and fell into disrepair. The University of Manchester bought it in 1969 for use by international students; and in 2004 it was acquired by the Manchester Historic Buildings Trust for the princely sum of £1. They then raised the money needed to restore it. Exterior renovations were completed in 2011 and the house is now open to the public. Except there’s a pandemic on, so its doors are closed for now.

Thankfully the good people who run Elizabeth Gaskell’s House have taken things online and they’ve fully embraced the Zoom meeting. Over the last few months they’ve put on a busy programme of online events, ranging from book groups and readings; to recitals and online talks. I joined them last week to take a virtual tour of the house. 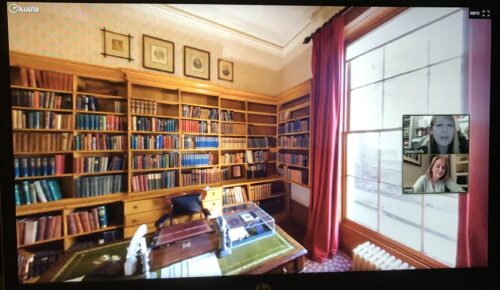 The tour was run by two incredibly knowledgeable volunteers; Diane Duffy, a researcher and tour guide, and volunteer, Anne. It was very well done. We all Zoomed in at 7pm and we were welcomed by Anne who asked us all to mute ourselves and turn out cameras off before we began. We were urged to use the chat function to ask any questions and there were lots of opportunities to do so.

Using a PowerPoint and a range of photos, Diane took us on an hour long tour of the ground floor of this Grade II listed house. We explored the Morning Room, William’s study, the Drawing Room and the Dining Room which was also where Elizabeth used to write her novels and letters. Diane told us all about the house and the family; with lots of anecdotes and little details about them all. I felt almost as I knew them by the end of the tour. 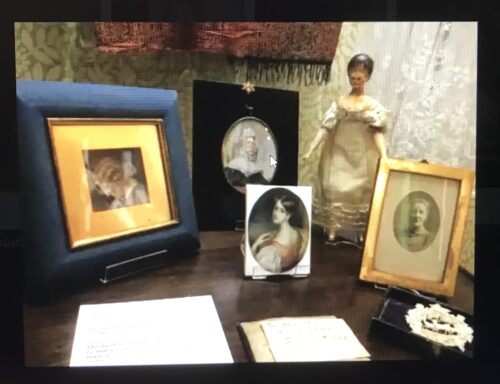 Whilst the house is closed to the public, they are taking to opportunity to restore Elizabeth’s bedroom. We had a quick glimpse of this, but it’s made me keen to visit in person when I can to see it in all its glory.

The online tour was a fantastic way to visit the house; especially if you don’t live in Manchester or plan to visit soon. It cost just £10 which is excellent value; the amount of information and detail we were given has made me want to delve deeper into her life and read more of her books.

The online tours are a great way to support this historic house. We are living through trying times and their income from visitors has been very much reduced. The £10 gets you an hour long tour with a very knowledgable tour guide and  10% off purchases in the online shop. 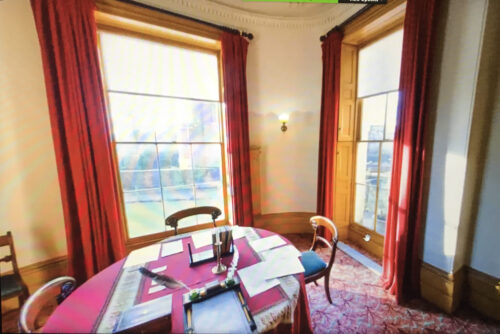 I’ve visited Elizabeth Gaskell’s House before for a craft afternoon, which was fantastic. I’d been meaning to come back and take the tour again. This has whetted my appetite to return and take the tour in person. I fully recommend these online tours, they’re a fabulous thing to do on a rainy lockdown evening.

For more information about Elizabeth Gaskell’s House and their online tours and events, visit their website.

*apologies for the not great photos which were taken of my laptop screen. The house is stunning in real life and not at all blurry.

Here in Manchester we are lucky enough to have a large number of historic buildings and houses. Hidden in plain sight on one of the busiest roads leading to the city centre is Elizabeth Gaskell’s House. The house is the former home of the famous author and her family. Her novels include Mary Barton, Cranford, North and South, Ruth and Wives and Daughters. I went along to enjoy a “crafternoon tea” session in the Servant’s Hall. Craft, tea, cake and a beautiful historic house – what’s not to like?

Elizabeth Gaskell’s House have been running Crafternoon Tea sessions for the last few months. I’ve really wanted to go to them but I was a bit worried that my sewing skills were not good enough; but I need not have worried. I went along to try my hand at some Victorian Crazy Patchwork; a craft I’ve never heard of  before but one which is ideal for people like me who have fairly basic sewing skills.

The Crafternoon Tea sessions are run by talented volunteers. The Victorian Crazy Patchwork class was run by Margot, a very experienced and helpful teacher who provided everything we needed to create our own crazy patchwork. Margot began by talking us through, step by step through the process. One of the best things about Victorian Crazy Patchwork is if your sewing isn’t especially neat, it doesn’t matter because the stitching is covered by the fabric, making it ideal for beginners. 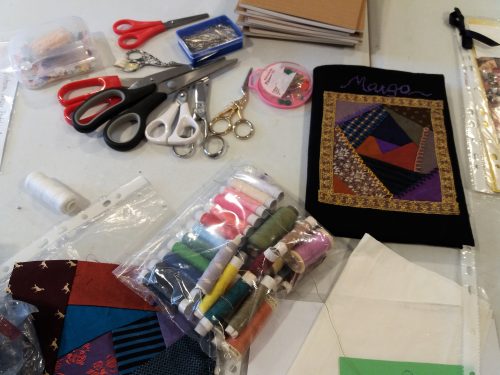 Margot gave us all a pack including a template, a piece of calico and a notebook we could cover with our patchwork. There was a large bag of silk pieces on the table and we all selected a few pieces for our patchwork. We cut out our hexagon shaped centre pieces and stitched them onto our calico; then we cut pieces of contrasting silk and stitched them on. Sewing them so the stitches are underneath (this is hard to explain but hopefully you can get the idea from the photo below). 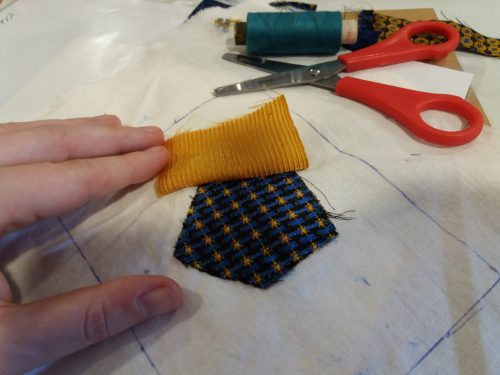 Around half way through the session we stopped and made our way into the tea room for a pot of tea and a slice of really good cake. The tea room is a lovely airy space with the original stone floors from Elizabeth Gaskell’s days at the house. It was the hottest day of the year so far and it was the perfect place for some cool respite from the temperature outside. 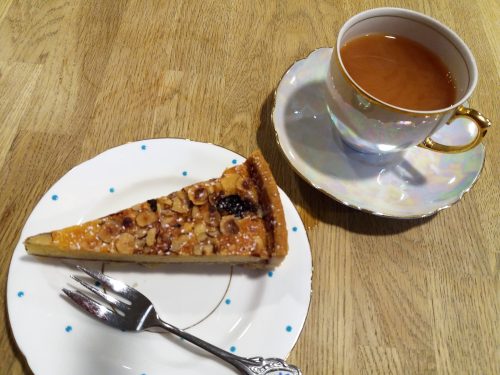 After we’d been fueled by tea and cake, we returned to the Servants Hall to carry on with our crazy patchwork. It soon became clear that despite my best efforts, I wouldn’t be able to finish it in the two and a half hour craft session. Thankfully Margot let me take everything I needed to finish it at home. In fairness, it was ambitious of me to try to finish within the time. But I left armed with the skills and knowledge to finish off my work at home.

The Crafternoon Tea at Elizabeth Gaskell’s House costs £19 and includes everything you need to create your craft as well as a hot drink and cake. Keep an eye on their website for more craft and literary events. I do know they have a few limited places left on their Crochet Afghan Squares Crafternoon Tea on 17th May and Paisley Woodblock Printing Crafternoon Tea on 21st June 2018. 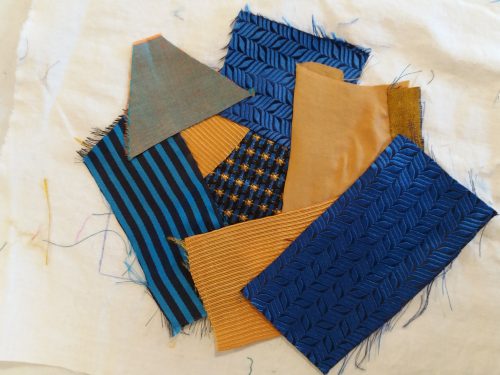 My not quite finished Victorian Crazy Patchwork.

I had the most lovely relaxing afternoon. Even though I went by myself, the rest of the crafters around the table were all very nice and chatty. It was lovely to switch off and concentrate on sewing the patchwork and enjoy the peaceful and historic surroundings of Elizabeth Gaskell’s House.