Star-Lord is one of the galaxy’s coolest heroes. Star-Lord, otherwise known as Peter Quill is played by Chris Pratt in the hit movies, he definitely has the best playlist in the galaxy. Released at the same time as Guardians of the Galaxy: Volume 2, the Electronic Music Mix Star-Lord figure was an instant hit with the small boy. 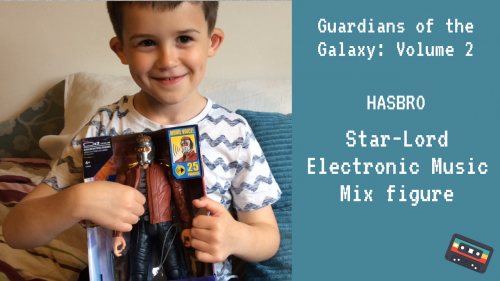 The Electronic Music Mix Star-Lord figure is 12 inches of fully moulded plastic. Just his arms, hands and head move, but he’s very solidly build and he can stand up on his own, which is a big bonus.

He comes with 2AA batteries already inserted, but these are demo batteries and will need to be replaced before long. Though it means that he’s chatting as soon as you get him out of his box. 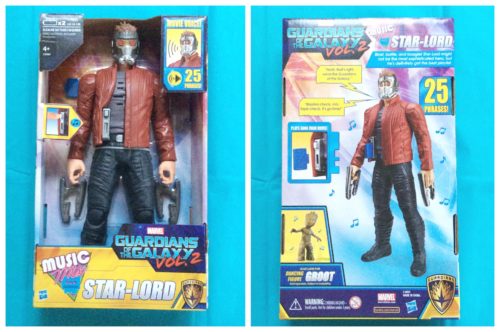 Included with the Star-Lord figure are two sub-machine blasters, a mix tape and a set of instructions. The figure is suitable for ages 4+ and is available from a range of retailers including Amazon for around £27.99.

To set the music playing just insert the blue mix tape into the walkman on his belt. There is also a button here which you press to make him repeat the phrases.

The blue mix tape is pretty small and I’m certain it will be lost almost immediately, so I’m pleased that Star-Lord is still able to speak without it. One thing to note about the mix tape is when it’s inserted and playing a song, if you press the button it makes a cool rewinding sound. Which is a sound I miss. 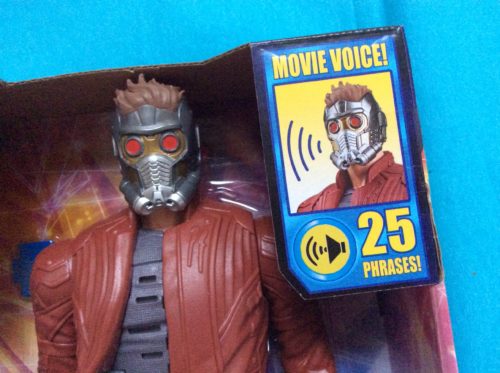 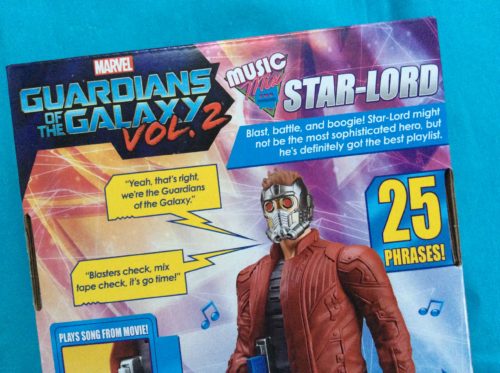 I have a fairly love/hate relationship with the two sub-machine blasters which come with the figure. They are pretty tricky to force into his hands. Be prepared for your kids to hand them to you and get you to do it. But, once they are in, they’re in, so they don’t easily fall out and get lost. 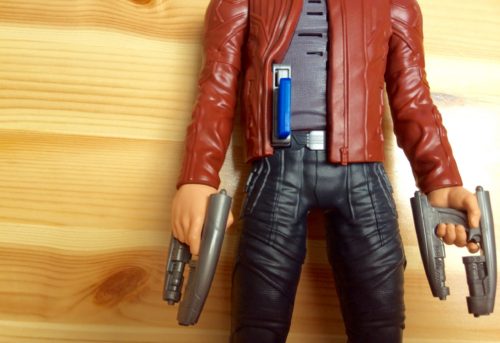 As with all noisy toys, I’m sure parents will tire of this pretty quickly. I know after half an hour of him pressing the button and singing along I had to excuse myself to get a few minutes peace. I love the film too, but I have a fairly low tolerance for noisy toys. This could probably do with some kind of volume control button. 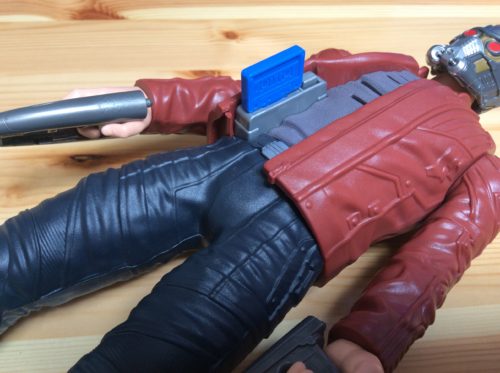 I’m not sure how much appeal this toy will have after the initial flurry of new toy excitement. He has limited movement and I think once his stock of phrases and song selections have been rattled through a few times, he might find himself consigned to the toy box. Which is a shame, because he is a handsomely moulded figure and would look really cool on a shelf and taken down and played with when other Guardians of the Galaxy fans are visiting.

My son really loves this figure, he loves everything about it. I’m not 100% sure he will enjoy playing with it for long though. Once he’s grown tired of it, I’ll make sure it has a place on our cool things shelf. Because it is if nothing else a very cool thing.

To see the Guardians of the Galaxy Electronic Music Mix Star-Lord figure in action, please take a minute to watch this video…


We were sent the Guardians of the Galaxy Electronic Music Mix Star-Lord figure for review purposes. All images and opinions are our own. This blog post contains affiliate links.