There’s something magical about taking your child to the theatre, since he was small we’ve taken the boy to see lots of shows at local theatres (we live in Manchester so we are a bit spoilt). In his four years he’s been to the ballet, watched The Gruffalo, Charlie and Lola and In The Night Garden amongst many others; we’ve seen pantomimes and end of pier shows. He loves the theatre, he loves the lights, the music and the action.

Of course taking a small child to the theatre can require a bit of planning. We always talk about what is likely to happen, the lights will go out, there might be loud noises, there will be singing and dancing and lots of fun etc. When the lights do go out it can be very dark, so it’s good to reassure them, also I find that a snack offered when they start to fidget can be useful in helping them settle back and watch the performance.

Often children are just awed by the theatre itself, the size of it, the acoustics and the scenery. We like to arrive a little early to take them all in fully, as well as find where the toilets and baby changing rooms are just in case.

These days children, especially pre-schoolers are very well provided for in terms of theatre shows. There are lots of touring companies which cater for young theatre-goers, and a number of children’s TV stars also do regular tours. One of these TV heroes is Justin Fletcher aka Mr Tumble. Justin is a legend among pre-schoolers and their parents. I know the small boy would LOVE to go and see Mr Tumble live. 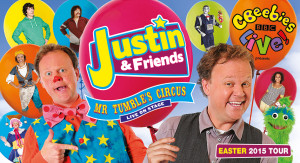 Thankfully Justin & Friends: Mr Tumble’s Circus is coming to town, in fact lots of towns over Easter, the tour starts on April 1st in Cardiff and ends in Manchester on April 14th, visiting  London, Sheffield, Birmingham,Liverpool, Nottingham and Glasgow along the way.

Justin & Friends: Mr Tumble’s Circus stars the amazing and versatile Justin Fletcher and the show will also feature CBeebies presenter Cat Sandion and Swashbuckle star Gemma Hunt, as well as dino-mad Andy Day, Robert the Robot played by Steve Kynman and Little Monster. Mr Tumble will be inviting a few family members along too including Aunt Polly as well as some familiar faces from Gigglebiz including Keith Fitt. Justin & Friends: Mr Tumble’s Circus is a brand new production and it will be touring UK arenas during Easter 2015.

Check out this exclusive behind the scenes peek at Justin & Friends: Mr Tumble’s Circus, it looks really, really awesome!