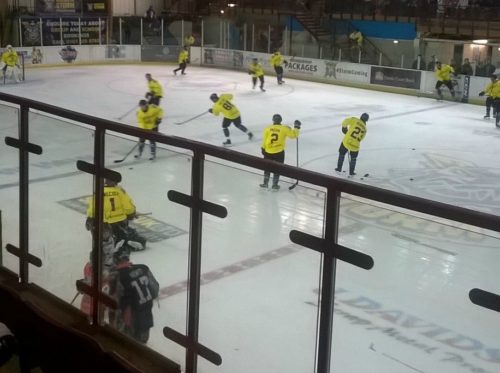 We’ve been busy over the Christmas break, doing nice things as a family, day trips and so forth. But on New Years Day we took the boy to see his first ever ice hockey game at the Altrincham Ice Dome near our home in Manchester. The Ice Dome is home to English Ice Hockey legends and recently resurrected team, Manchester Storm.

Hubs and I used to be season ticket holders of the old team when they played at what was the MEN Arena in Manchester. We started watching them play in maybe 1998 and attended every home game and some away games until the team folded in 2002. We loved Manchester Storm and we were incredibly sad when they ceased to be. 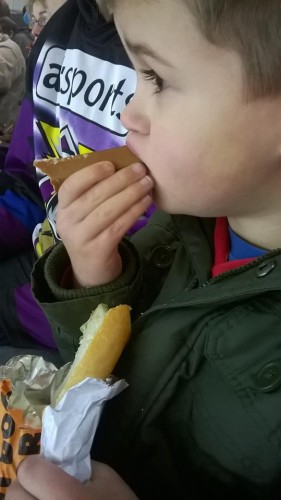 His first hot dog at the storm shelter!

Ice hockey is a good sport to go and watch with your family; the rules are reasonably easy to pick up, there’s lots of family entertainment and singing and dancing in your seat, and there’s virtually no bad language or things you don’t want your kids to hear. Plus the teams are usually fairly accessible, so it’s not hard to meet your ice hockey hero.

Manchester Storm are part of the Elite Ice Hockey League, which includes 10 teams from across the UK. Players are typically a mix of home-grown talent and players from Canada, USA and Europe.

The Altrincham Ice Dome seats (I’m told) 2000 people and on New Years Day Manchester Storm were playing their old rivals Sheffield Steelers. The Ice Dome was packed with fans, luckily we were early in and managed to bag some pretty good seats.

With three 20 minute periods (with frequent stoppages) and two 15 minute intervals we were treated to nearly 3 hours of entertainment, the adult tickets were £15 and a kids ticket was £7. It was cold, I’d forgotten how cold an ice hockey rink could be, I spied a few people with blankets over their knees, thankfully we’d wrapped up warm, so once it began we soon thawed out, especially with all the singing, dancing and clapping we did.

It was a tense match, the Storm who were short benched that night were on the back foot from the start, but managed to take an early lead. The atmosphere was electric and the lively teams scrapped for the lead throughout, at one point Manchester Storm were 4-1 up, but The Steelers, never ones to take anything lying down pulled something out of the bag in the third period which ended at a heart-stopping 4-4. Five minutes extra time was added and regrettably Sheffield managed to score, meaning they went home with 2 points and we went home with nothing but smiles and good memories.

It’s never fun to lose, but having not attended an ice hockey game for maybe 13 or 14 years it was so good to be back. Manchester Storm are in my heart, I knew all the songs and the chants and it’s in my blood again. You don’t mind losing so much if your team play with heart, and Manchester Storm have always had that in spades.

It’s a good family trip out and about a hundred times cheaper than going to the football or similar, and there’s something nice about being part of a family of fans. If you do go make sure you wrap up warm and don’t forget your singing voice. See you there? 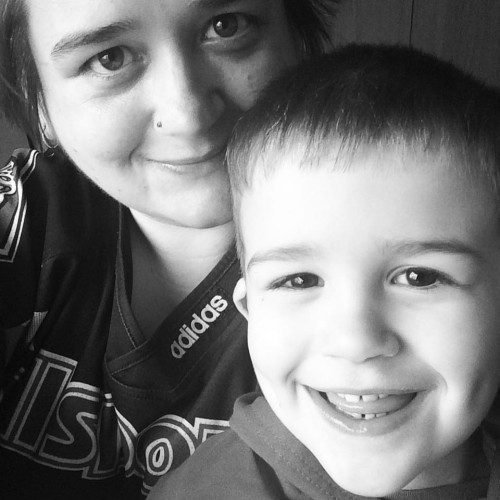