We were invited guests of Purezza Manchester. All opinions and images are our own.

Over the weekend, the boy and I went to the soft opening of Purezza Manchester; a new vegan pizza restaurant on the corner of High Street and Thomas Street in Manchester’s Northern Quarter. The boy was excited because it was pizza and I was excited because I’m lactose intolerant and I normally can’t eat pizza without a generous side of lactase pills. 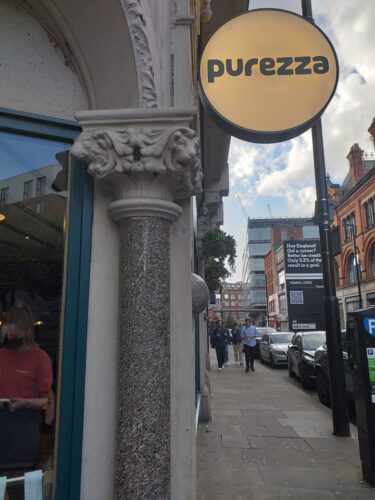 This new restaurant is part of a small chain of vegan pizza joints up and down the country. Purezza suits its spot in the NQ; it’s smart but quirky, with a set of swings and a cow seat available downstairs for Instagram posing.

On its soft opening Saturday night, the restaurant was buzzing, and there was a small smattering of families, as well as groups of friends and couples on dates. Something for everyone! For those with under 10’s in tow, there is a kids (under 10) menu where they can eat for free. Again this is all vegan and my boy (a confirmed carnivore) opted for the vegan pepperoni. The kids’ drinks were a choice of lemonade or cola, he opted for cola. I’d have welcomed some juice options on there, but that’s just a niggle. 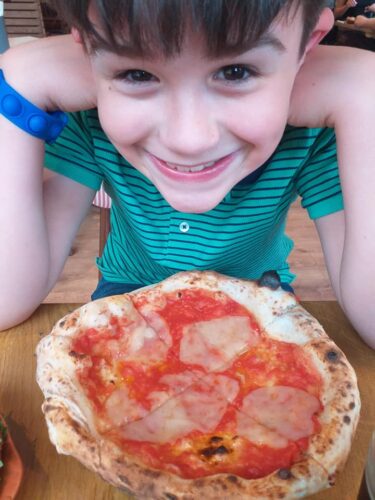 I chose The One and Only, Parmigiana Party – a generously topped pizza with a red tomato base with smoked mozzarella, aubergine parmigiana, crumbled sausages, topped with a dusting of nutritional yeast. On the side I had a rocket and sundried tomato salad and we shared a portion of giant cheese filled doughballs. The doughballs were the best I’ve ever had, and that’s saying something! 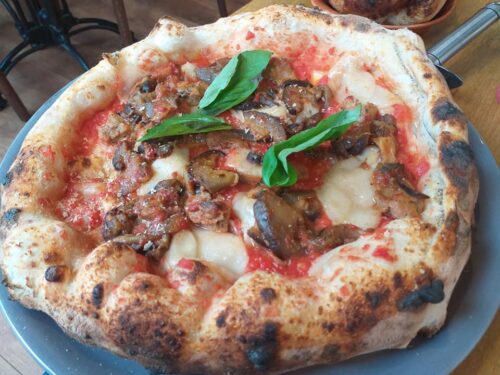 The pizzas come with a choice of bases; wholemeal, hemp or gluten free. We went for the wholemeal and it was a good choice. Not a single bite of our pizzas felt like we were taking the healthy high road. It was just very good pizza made vegan. Even the boy gobbled down his vegan pepperoni and said he’d have it again; always a good sign from my slightly particular son.

Purezza has an interesting drinks menu. It’s been a while since I went out and showed myself a good time, so I treated myself to a Ginger Amaretto Sour; a lively mix of amaretto, ginger juice, lemon and agave. It was so good I had to have a second one just to be sure.

For pudding we just had to share the chocolate pizza. This is definitely a sharing dish and one only the brave or the very hungry could tackle alone. It’s essentially a huge puddle of melted chocolate on a pizza base, topped with some vegan ice cream. It was excellent, if a bit much on top of our slightly greedy main courses. 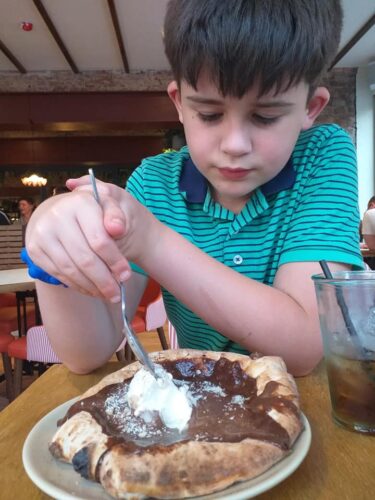 Would we go again? Yes, it’s a treat and a half for me to eat good pizza and not fret about taking my lactase pills. It’s also very good pizza. With the kids eat free option, my bill came to just £34; which for dinner, cocktails and a giant chocolate pudding (plus pizza leftovers to take home), made for a very reasonable night out.

Purezza Manchester can be found at 75-77 High St, Manchester M4 1FS for more information or to book, visit their website.