Being your average wife and mother, I never thought I’d go through drug withdrawal. When I think of going cold turkey I imagine Ewan McGregor literally climbing the walls in the film Trainspotting. If I’m honest it’s a lot like that. But I wasn’t addicted to heroin, I was addicted to something my GP gave me. Codeine.

In 2013 I had two spinal surgeries and went through rehab. For around 8 months of my life I was in the worst pain imaginable, worse even than childbirth, a little bit of the innards of one of my disks was pressing, nudging and quietly torturing my nerve root. Excruciating isn’t the word, to “manage” my pain I was prescribed a heady mix of tablets including 8 codeine tablets a day, as well as a selection of other painkillers, muscle relaxants and things to make me float above the pain.

They were heady days, I spent most of them lying in bed or on the sofa sleeping or just enjoying the floaty feeling. It was a half life. I wasn’t part of my family, I watched them live their lives while I kept taking my tablets and crying. My life wasn’t worth living.

After my second operation I quickly found my feet again and was tucked under the wing of a brilliant Physiotherapist. I didn’t really need a series of special exercises, I needed someone to tell me to walk, to swim, to tell me that living my life wouldn’t damage me further. Over six weeks I went from hobbling up the road to walking a few miles down the river. It was brilliant.

Towards the end of of series of sessions he broached the subject of my painkillers. I didn’t consider that I was addicted to them. I took them as and when I needed them. Maybe some codeine to get me out of bed a few days a week, normal paracetamol as a top up throughout the day, a diazepam if I’d overdone it and needed to properly relax and sleep.

I wasn’t medicating for the sake of it, just when I needed to. Which was fine, but he suggested that I try and drop the codeine. So I did. After all I was only taking four or five a week, not the 50+ I had been on, that should be easy shouldn’t it?

I decided to go cold turkey. Like most things, I make my mind up and then my stubbornness just carries me through. After a couple of days of being codeine free my body was aching badly like I had flu, I shivered and suffered. I couldn’t get comfortable. For days I was like this. I had an awful headache that wouldn’t go, it was oppressive, then the toothache started and it got so bad I nearly phoned the dentist. At some point over the week of withdrawal I had a 48 hour session of diarrhea and vomiting, I couldn’t keep anything down. I felt like hell.

It took me a few days to figure out what was wrong with me. I was going through classic codeine withdrawal. I genuinely felt like I was in Trainspotting and I was about to die. Apparently your body wants the codeine that much, it makes your brain think there’s pain somewhere so you’ll give in and take the pills. It starts off with the aching and the headache and then the awful toothache. Thankfully I’m bloody stubborn so I didn’t give in.

I remember rolling around on the bathroom floor, shivering and sweating and wondering what the hell was wrong with me. I was in such pain and I didn’t know why. I did it cold turkey, I didn’t mention it to my GP, I had no support, I had no idea codeine withdrawal was even a thing, but it is. It’s a horrible thing.

So when a GP suggests I take some codeine for my pain I actually physically recoil. For me codeine is a last resort. It’s a great drug if you can tolerate it and if you can put up with the side effects, but it’s addictive. I wasn’t mentally addicted to it. It was easy for me to mentally to step away from it, but my body had other ideas, it had an addiction and forgot to tell me.

It’s easy to think when a GP gives you a prescription that they’re not dangerous drugs, they’re not addictive or harmful, they’re just pills that’ll make you happy or take away some pain or whatever. You don’t think about what it’s like to come off them. My GP worried a lot about me becoming addicted to diazepam (never happened, it’s a lovely, lovely drug but I was always careful with it) and they worried about me taking things like diclophenic (which can harm your stomach), but not one of the many GPs, Doctors or Consultants I saw during my 8 months from hell even hinted that codeine was addictive, I doubt any of them had really considered that it might be an issue.

It’s not that I wouldn’t have taken them, I wouldn’t change a thing because they really helped me when I needed help. But it might’ve been nice to have a bit of a heads up that stopping them would lead to codeine withdrawal. It’s pretty grim and had I known about it before, I’d have been mentally prepared for it. It’s worth doing because I do feel so much better, more alert and the horrible side effects of taking codeine have vanished.

If you’re on codeine and about to come off it, don’t be afraid of the withdrawal, think of it as a week long planned flu with a bit of a stomach bug thrown in. Keep hydrated, keep moving if you can, be kind to yourself, take other painkillers as and when you need to and whatever you do, don’t give in to it. It’s just your codeine hungry mind playing painful tricks on you. I’ve been “clean” and codeine free for over a year now. It’s a good feeling. 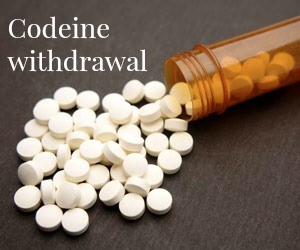