AD/Gifted. Over the weekend we were looking back at pictures of my son as a toddler and there were a few pictures of him playing with some of the dinosaur figures we’d got him. He’s still playing with them now and every few months we add another dinosaur or two to his collection. Over Easter we’ve added the new 2019 Schleich Dinosaur Figurines to his dino box and he’s thrilled! 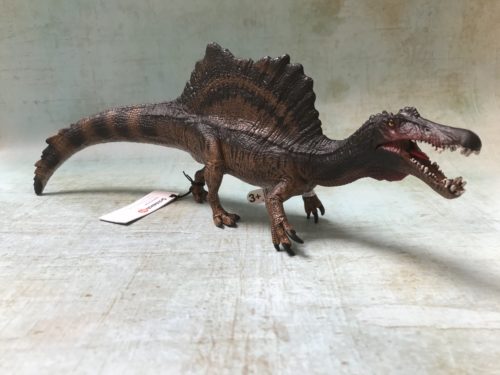 The Spinosaurus was one of the most dangerous dinosaurs. It is considered the biggest carnivore because it was even bigger than the T-rex and the Giganotosaurus! It can be easily distinguished from the other two dinosaurs by the spiny sail on its back and its crocodile-like snout. It’s a bigger figurine, really detailed and has a movable lower jaw for extra ferociousness! 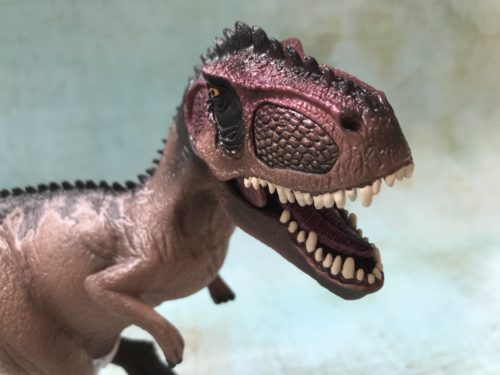 The Giganotosaurus is quite similar to the T-rex. Both were hunters with short arms, walked on two legs and had a large skull. However, the Giganotosaurus lived much earlier and was from North America, whereas the Tyrannosaurus rex lived in South America. This large sized figure had a movable lower jaw and is a fearsome as his T-rex cousin! 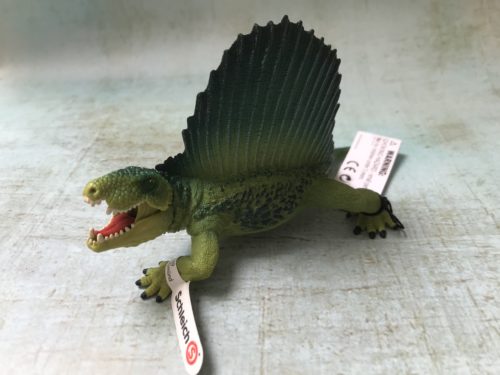 The Dimetrodon is often referred to as a dinosaur. However, it is a primeval reptile, a so-called Pelycosaurus. It has a sail on its back was made of skin and bones, helping it to warm itself quicker in the sun. If it wanted to cool down, it positioned the sail parallel to the sun’s rays. This colourful reptile also has a movable lower jaw and makes a colourful addition to any dino collection. 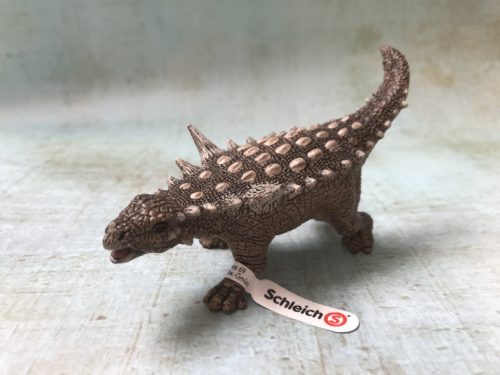 The Animantarx was an approximately 3-metre-long dinosaur with bone plate armour. Only one skeleton of the dinosaur has ever been found, so scientists don’t really know much about it. It lived during the Upper Cretaceous period, at the time of Argentinosaurus and Giganotosaurus, and fed on plants. It has a squat body and looks like it would be a dangerous enemy to have!

My favourite dino from the collection is the Dimorphodon. It was a small flying dinosaur with a large skull and a long beak. It hunted fish, insects, lizards and other vertebrates, which it held with its claws and then ripped apart with its fangs. With its short wings it could probably only fly short distances, for example from tree to tree. They styling of the figure is really sweet and I can really picture it swooping down to hunt. 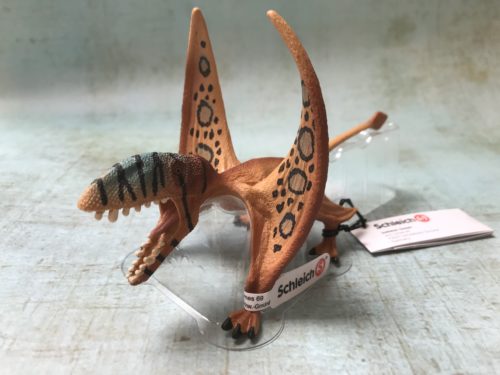 The new Schleich Dinosaur Figurines are aimed at children and collectors aged 5+, though the figures are suitable for ages 3+. The new collection also includes a newly re-styled Plesiosaurus, a Dracorex and a Diabloceratops.

As with anything made by Schleich, everything has been beautifully hand-painted and the modelling and attention to detail is excellent. They are really great collectors pieces and the quality is fantastic. The Schleich Dinosaurs my son has been playing with since he was three are still in perfect condition and still played with on a very regular basis. I’ve decided to keep them once he (if he) grows out of them to pass on to any grandchildren I might have.

If you’re building a dino collection of your own, or if you’re starting a collection, these Schleich dinosaur figures are a great place to start. The full range of dinosaurs is extensive, so whatever dino is your favourite, it’s bound to be available.

You can buy Schleich dinosaurs from a wide range of retailers including Smyths Toys and directly from Schleich.

Disclosure: We were sent some of the Schleich Dinosaurs range for review purposes. All images and opinions are our own.

Recently I’ve started joking to friends that I’m thinking of renaming my blog Dinosaur Days. It sometimes feels like a good percentage of my blog posts are about dinosaurs. When I started out blogging, my blog was there to document our lives; the things we did and the things we liked. Right now, dinosaurs are a pretty big part of our lives because the boy just loves them. Apologies if you’re not as enthusiastic as us about these pre-historic creatures, but there’s usually cake on Friday; so do pop back then if that’s more your thing. Today I want to take a look at some of the new range of Schleich Dinosaur figurines. 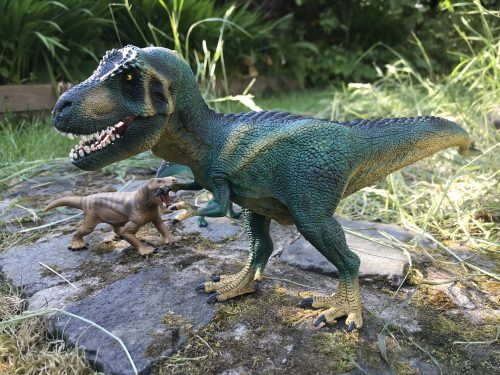 Schleich are one of the leading makers of dinosaur figurines. If you’re into dinosaurs, Schleich is the most well-known, quality brands around. Cheaper dino figurines are usually made in China and the bigger ones are often made in two pieces and glued together; which I think looks terrible. We have quite a lot of the Schleich dinosaurs and you can easily spot the difference between them and the made in China figures.

The Schleich figurines are designed with great attention to detail and are painted by hand. Dinosaur figurines help children to explore the fascination of the prehistoric era and its creatures through play. 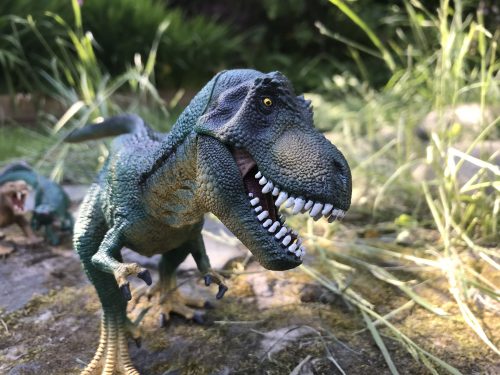 The new Schleich Dinosaurs for 2018 include a large T-Rex (£15.99), a Dinogorgon (£7.99) and a Psittacosaurus (£7.99). These dinos come in new poses and are really realistic. The quality of these hand painted figurines is superb. They look fabulous fighting to the death in the patch of long grass in my garden.

The T-Rex is fierce looking and impressive, he stands at just under six inches tall and has lots of detail. He’s pretty steady on his feet and coped well on my uneven garden cobbles. He had a hinged jaw which opens and closes, which means you can make him bite any other dinos he catches. It’s pleasing to have some movable parts as this really helps bring them to life in my son’s imagination. 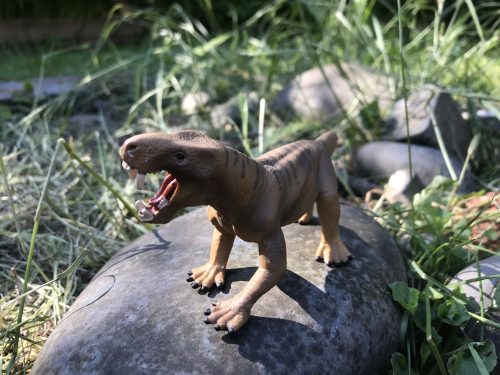 The Dinogorgon lived in South Africa and it’s name translates as terrible gorgon; which probably indicates he wasn’t that friendly.‭ ‬The Dinogorgon was about ‬two meters long and ate smaller lizards. This is the first Dinogorgon in the Schleich range.

The Psittacosaurus was quite a strange looking dinosaur. It was small, dinosaur which had a toothless beak a bit like a parrot. Its tail was covered in long and thin spines as a porcupine. Again, this is the first Psittacosaurus made by Schleich, which makes it quite special. 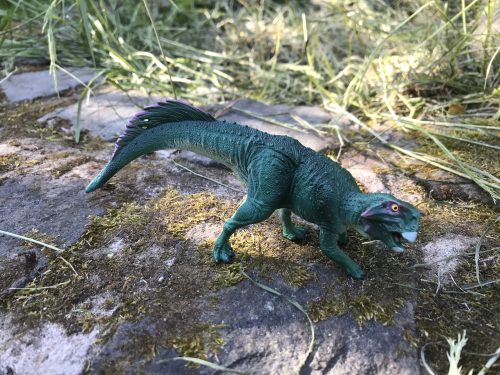 The boy is understandably thrilled. Adding these new for 2018 dinosaur figurines to his collection just a few days before the release of Jurassic World: Fallen Kingdom at the cinema is a real thrill for him.

These Schleich Dinosaur figurines are available at www.schleich-s.co.uk or from other toy retailers.

If you liked the look of these Schleich figurines, you might like this Dinosaur Skull Trap also from Schleich which we reviewed last year.

Disclosure: We were sent these Schleich Dinosaur figurines for review purposes. All images and opinions are our own.