Our National Trust membership runs out at the end of this month. It’s an expense we can regrettably no longer justify, so we’re squeezing every last ounce of value out of it while we can. Today we decided to go further afield, so we hopped in the car for a little family road trip. We were Shrewsbury bound and heading off to Attingham Park for an adventure.

We didn’t really know what to expect from Attingham Park. Perhaps we should’ve read up a bit before we went, but we knew National Trust properties are generally really accessible and everything is well signposted, so we took a chance. There was a lovely house to explore, a deer park, some woodlands, a kitchen garden and much more.

We arrived at lunchtime and we were pretty hungry, so our first stop was the Carriage House Cafe which served simple food. There were a few different places to eat and drink, but we chose this as it was nearest. We shared soup and pasties, which warmed us all up and fortified us for our wintery walk.

Opposite the cafe, which is located in the large courtyard, is the shop and the old stables. For the 1914 WW1 Centenary they have a small but very interesting exhibition about Attingham Park in the stables. The small boy loved exploring the stables, he’s a wannabe farmer and took great care “feeding” the wooden horses hay. He loved the horses (pictured) but at £1500 they were just a teeny bit out of our price range. 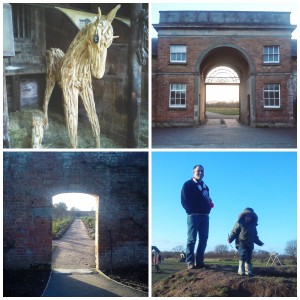 After exploring the stables we wandered down to the orchard, walled garden and then on to the vast playground. The orchard was over three acres and contained 160 apple trees, but at the start of January there wasn’t much to get excited about. We thought it would be an impressive sight in spring with the trees covered in apple blossom. Next to the orchard was the impressive walled garden which has been lovingly restored over the last ten or so year. It’s now producing organic fruit and vegetables and supplies the various cafes and tea rooms at Attingham Park; in season you can also buy fresh produce to take home.

The playground was a bit of a revelation, it was huge and wasn’t your normal play area. It’s been created to encourage adventurous play; so there were dens and stone circles, small hillocks, willow tunnels as well as your standard swings and roundabouts. Good fun, but I wanted to explore a bit more before darkness fell, so I left the boys and struck out by myself.

Although the mansion house was closed for winter, the cafe was open and I knew I’d be able to walk around the exterior of the house. It was as you’d expect pretty vast, a beautiful stately home and I’d love to have been able to spend a bit more time exploring. I managed to take a few snaps, but the light was starting to fade and I’d promised to meet the boys for a warming brew before we headed home. 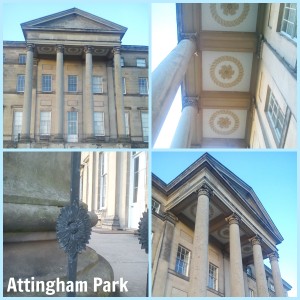 As you can see it really is a stunning house, but for me it’s always the smaller details; the intricate ironwork and the almost hidden ceiling roses. There were so many beautiful stone carvings and flourishes everywhere. It was stunning and the views from the building were breathtaking. I didn’t realise just how beautiful that part of the world was.

The cold was running through our bones and despite being well wrapped up the small boy was beginning to shiver. We met up at the Carriage House Cafe for excellent tea and cake. Suitably warmed, we set off home as the moon rose in the sky and the sun tucked itself up for the night. We agreed that getting out of Manchester for the day had put a spring back in our step; blown a few cobwebs away and it had been another grand adventure.

We’ll be back to Attingham Park again. It’s famous for its walks so I’d like to do a bit more of that. It’ll be nice to see it in different seasons. It’s a shame it’s not closer, it’s a real gem and a great family day out. 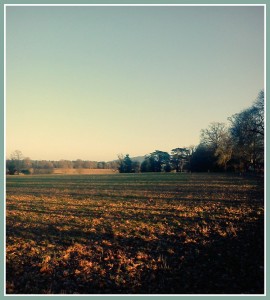