My son, lover of maps and everything geography has been asking for his own globe for a few months now. We’ve been looking at a few different kinds of globes in the run up to his birthday. We wanted something more than just a simple globe; we wanted something which would furnish him with facts, test his knowledge and teach him about the world. Did the Oregon Scientific Smart Globe Explorer AR tick all of those boxes? 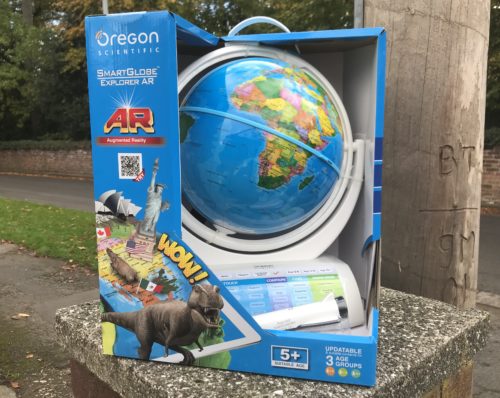 The Oregon Scientific Smart Globe Explorer AR is a globe which opens up so you can also explore the solar system and the Earth’s core. It comes with a wireless talking smart pen which you touch the globe with and it helps you explore the world and the solar system. You can also install an App on your phone or tablet which allows you to explore in more detail using augmented reality. 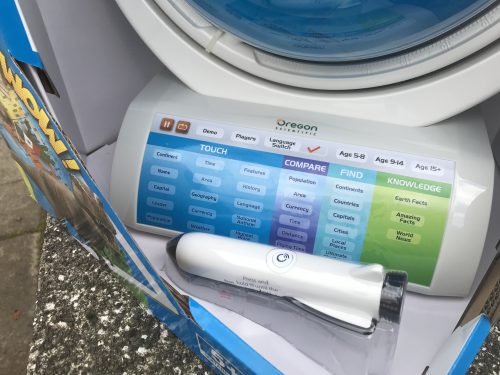 The globe sits on a stand which has an interactive activity panel which contains more than 42 educational games and activities. To operate the activity panel you need to use the smart pen which you can charge and update using the USB cable included. The pen takes about two hours to fully charge and the charge seems to last quite a long time. The smart pen is shaped a bit like a space shuttle and makes all the right noises.

To use it, you select your age group and activity, then follow the instructions. There are simple games like finding certain places on the globe and touch them with the pen. There are three age range settings; 5 to 8, 9 to 14 and 15+, and a pull-out local map so you can explore the UK and Ireland in more detail. The Oregon Scientific Smart Globe Explorer AR is suitable for ages 5+. 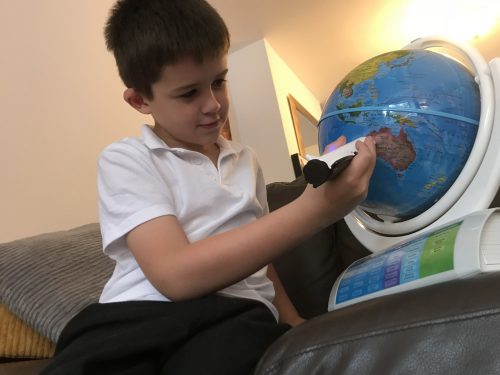 There’s such a lot of educational value in this Smart Globe Explorer with over 220 countries to explore. The globe itself is vibrant and interesting, when used with the activity panel and smart pen there’s just so much information and interesting things to do. My son who is just shy of 8 years old picked up how to use it really quickly. I was delighted to discover at 6.30am this morning that there is a volume control on it.

Using the globe, you can learn all about countries, continents and capital cities. You can also find out about populations, currency and information about the world leaders. There’s also a current affairs section, which is one of the things which needs to be updated on a regular basis. 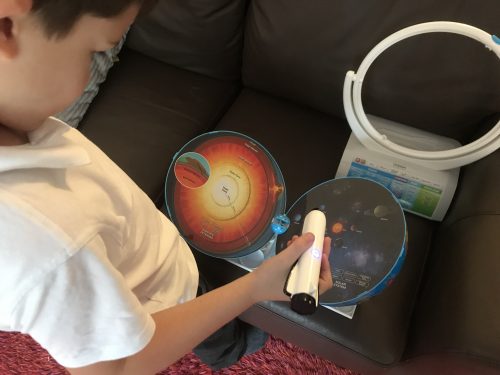 Weirdly, it somehow triggers our Alexa. If you have Alexa, it’s worth using your globe in a different room or it creates a slightly bonkers robotic cacophony.

Inside the stand is the pull-out map of the UK. Take this out and open it up and it creates a stand for the globe to rest on when it’s opened up. Using the smart pen you can tap on various points of interest on the inside of the globe and more information spills out.

It’s a great piece of kit. The Oregon Scientific Smart Globe Explorer is all we wanted in a globe and more. The smart pen and the activity panel really makes this for me. Together they’re a brilliant teaching tool and you can really learn a lot from them. It’s the kind of gift which will grow with a child. The different age settings mean that there is more age appropriate learning available with each birthday.

The Oregon Scientific Smart Globe Explorer is available from a wide range of retailers and online and currently costs £129.99 (though at the time of writing it’s £99.99 on Amazon). It’s a lot of money for a globe; but if you’re serious about STEM and learning at home, or if you have a child like mine who lives for maps and geography, then it’s worth investing it. Especially as it’s the kind of thing which will absolutely grow with the child.

We were sent the Oregon Scientific Smart Globe Explorer for review purposes. All images and opinions are our own.