Over the weekend the Stuff And Nonsense Theatre Company brought their production of The Emperor’s New Clothes to The Lowry Theatre, Salford Quays. This new adaptation of the well-known tale, written and directed by Niki McCretton is currently on a UK tour.

This one hour show is for ages 3+ and brings to life the Hans Christian Andersen tale of an eccentric Emperor who loves clothes more than anything. It’s his birthday and he wants a new designer outfit to wear to his birthday parade. Two ‘designers’ (Bolshie and Banana) promise to create him an outfit that’s “never been seen before”, and the eccentric and vain Emperor doesn’t quite realise the spectacle he is about to make.

It’s only the village pig herder Molly who is brave enough to break the news to the Emperor. Thankfully some well appointed bunting saves his blushes and a happy ending is guaranteed all round.

The Emperor’s New Clothes is brought to life by versatile performers Jenny Harrold and Toby Gascoigne who play couple of quirky characters and each manages a plethora of puppets. The show is packed with pithy dialogue, funny puppets as well as music and song.

The puppets, many of whom are made in the style of Muppets are the stars of the show. Each one has a funny accent and great dialogue. Jenny and Toby are lively and engaging, and my six year old son loved the play. It is pitched at 3+ but I think some of the younger audience members struggled to stay engaged during some of the wordier portions of the performance, so perhaps 5 or 6 is about the right age.

The set is one of the stars of the show. The action takes place in and around a huge wardrobe and dressing table. Throw in a couple of screens and this homely set is transformed, with the help of your imagination into a town, a palace for the Emperor, a bolt hole for Bolshie and Banana and the scene of the great birthday parade.

The Emperor’s New Clothes is funny, energetic, charming and captivating. It’s as engaging for parents as it is for children, and for me that’s the secret to really good family theatre. 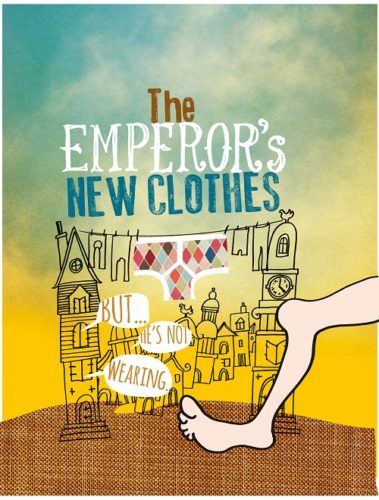 We were given tickets to The Emperor’s New Clothes for review purposes. All opinions are our own.