Over the weekend we went to the Timber Festival 2018. This was the first ever Timber Festival in the National Forest and we weren’t exactly sure what to expect. We’ve been to other festivals organised by Wild Rumpus, such as the Just So Festival, so we expected something fairly fantastical and we were not disappointed.

We arrived in the National Forest on Friday afternoon and we were directed to the small accessible camping area where we pitched our tent and then went to pick up our wristbands. We had a quick look around the top end of the festival site, but I had to go back to the tent to change out of my sandals and into my walking boots as the site was hillier and rougher under foot than I was expecting. 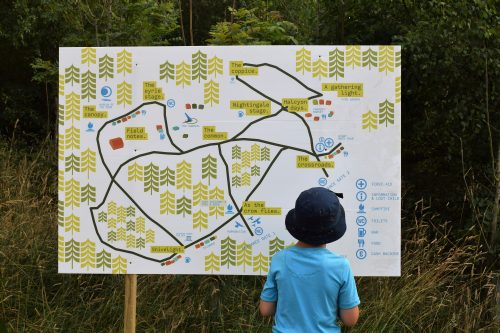 After an evening of merriment with our friends, we were raring to go on Saturday morning. We consulted our festival maps and decided to explore the more far-flung areas before the sun rose too high. We headed off to Halcyon Days so Ben could go on a bug hunt with the RSPB and then over to The Coppice to try our hands at stone balancing and to explore the coppice maze. The Coppice was a lovely area with some really interesting things to do, but it was quite far from the main areas, so we only went there once. 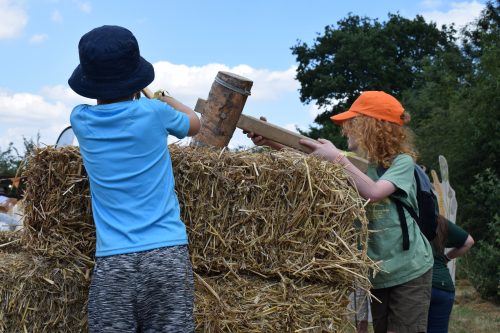 After exploring the upper area of the festival site, we walked down the hill, past the Nightingale Stage where there was a dance class going on and into The Common. This was where there were lots of rural crafts going on, such as whittling, clay crafts, willow weaving etc. The group of small boys went straight to the straw bale house building area and got stuck in. It turns out that a good grounding in LEGO building can help you when it comes to building a house out of straw. Just keep an eye out for hungry wolves!

Beyond The Common was Field Notes; an area packed with food and drink vendors and a lovely beer tent (at reasonable prices). It was here where we found most of our meals. There was a large marquee in this area which hosted discussions, speakers and the keynote speaker – Stuart Maconie. I saw Stuart a few weeks ago giving a talk about one of his books, I was excited to hear him speak again and I was not disappointed. Interesting, thought-provoking, honest and funny, if you get the chance to go and see him, do. 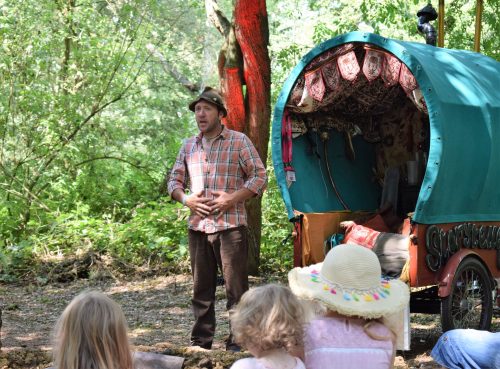 One of our favourite areas at the Just So Festival is the campfire area in the Spellbound Forest. The Timber Festival 2018 version of the Spellbound Forest was The Canopy. Just So favourite, Storyteller Ian Douglas was around the campfire several times each day and into the night, delighting everyone with his wonderful stories. It was a smaller, more intimate gathering than at Just So, which made it extra special. Ian is frequently accompanied by Dieter Wadeson aka Mr Foppletwig, who delights everyone with his slightly mad science experiments. Also around the campfire were some brilliant bands and singers, most notably Fishclaw and The Concordia Ashby Choir who performed their version of Africa By Toto and had everyone joining in. Brilliant. 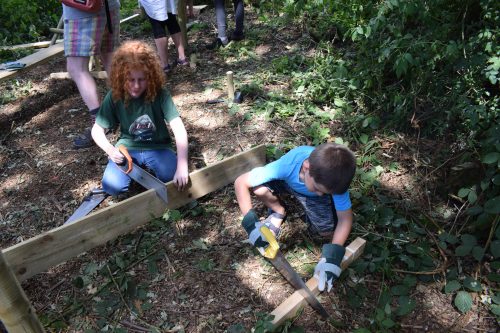 Near the campfire there were three other wonderful little areas of note. The boys loved the Hammer and Chisel area where children (supervised by a parent) could get their hands on real tools and worked together to build a wooden play area. The Museum of the Moon was incredible. Hidden in the trees was a giant moon. There was a subtle soundtrack on a loop playing music and the sound of a rocket launching. It was incredible and it looked stunning lit up at night. 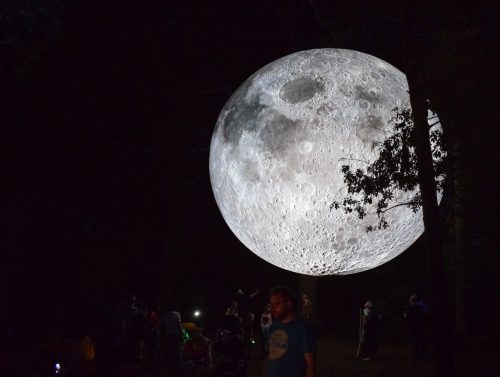 Just past the moon was the Eyrie Stage; a small woodland stage which hosted the most wonderful, eclectic mix of music. It was a real treat to listen to the music; especially Jason Singh who played some wonderful music based on birdsong, insects and environmental sounds.

If I had stuff to complain about, it would be that the site isn’t quite as accessible as it could be. The hills were a problem for me and my chum who both have some mobility issues. Things felt a little bit far apart; so the wonderful Coppice area only got visited once because twice would have been too much for me.

I’m not going to complain about the weather, this was the first festival I’ve been to where I’ve not suffered from rising damp, but it was so hot. I was very thankful they’d made drinking water freely and plentifully available at lots of places around the site. Plus there was a shower block close to where we camped, which was bliss in this heat.

Timber Festival 2018 was a wonderful experience. We felt immersed in nature and the surroundings; we spent time with our wonderful friends, the boys all ran about playing; getting filthy, battling with sticks, learning about insects, whittling, building straw houses, balancing on slacklines. They experienced life as a virtual reality owl; they listened to ancient stories around the campfire, learned some mad science stuff; danced to incredible music and generally got filthy and went a little bit feral for a few days. It was brilliant. 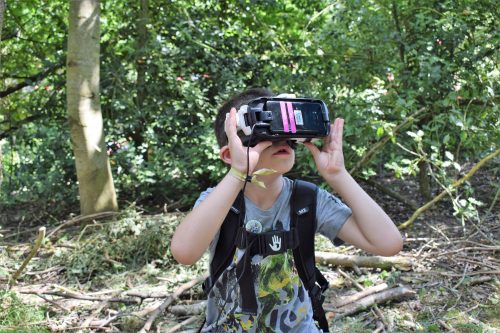 As ever, we were sad to leave, but absolutely delighted to have been part of such a wonderful festival. I would say although it is family friendly, it’s not really pitched at really little ones. The boys in our group were aged 7-10 and they were in their den-building, stick-fighting, adventurous element. It’s the family festival to go to when you feel you’re too old for Just So. I think we’ve got a couple of Just So years left in us, but we also cross over well into Timber. We loved it, we’re already looking forward to next year. Timber Festival 2018 had such a cool, folky atmosphere; it was the perfect way to wind down and have some summer fun with the family.

Sign up to the eNews at www.timberfestival.org.uk to be the first to hear about dates and early bird release tickets for 2019.

Want to hear what other people thought of Timber Festival 2018? Here are some other reviews which you might enjoy from The Brick Castle, That Lancashire Lass and We’re Going On An Adventure.

We were invited guests of Timber Festival 2018 and we were given tickets in exchange for a review. All images and opinions are our own.