On Sunday, the boy and I had a pair of tickets to go and see Young Explorers – Pictures at an Exhibition at the Royal Northern College of Music (RNCM) in Manchester. Storm Ciara was doing her worst, but we braved the tempests and we were very glad we did.

RNCM Young Explorers is a series of concerts designed to introduce young people to music. They’re generally relaxed performances and no one minds if babies cry or children giggle. It’s a great, unstuffy way to get the kids into classical music. We’ve been to similar things before and my boy has always enjoyed them, so I had a feeling he would like this too. 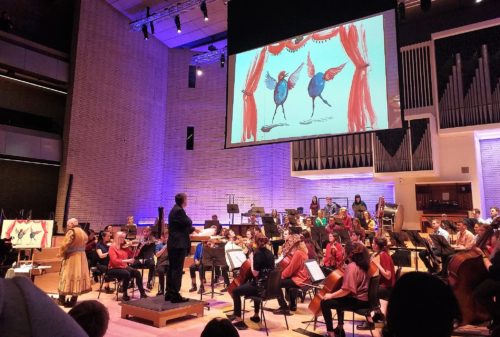 Pictures at an Exhibition is a piece of music by Russian 19th Century composer, Modest Mussorgsky. He wrote it in honour of his friend, the artist Vikto Hartman. The music is written so you can imagine you are walking around an art gallery, looking at all of the beautiful painting in it.

Pictures at an Exhibition was a little bit extra special because not only did it feature the Piccadilly Symphony Orchestra, but artist and author James Mayhew was painting scenes from the music live on stage.

We arrived early, had our RNCM Young Explorers Passport stamped (you get a free family ticket when you have 6 stamps) and took our seats. We had a great view of the stage and the easel where James would be painting. There was also a big screen which had the painting projected onto it, so you could watch every brushstroke in huge detail. 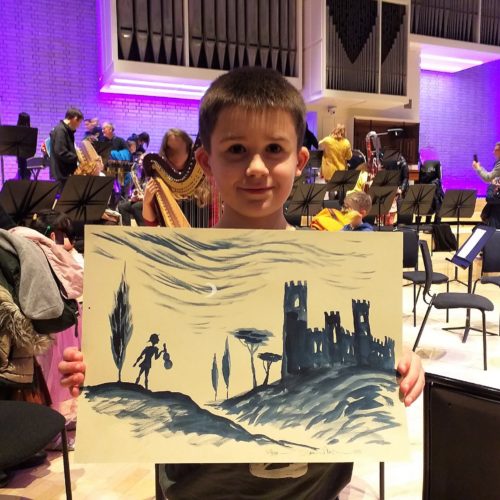 The performance began and James deftly threw some paint on a board and created the most incredible, beautiful paintings. Half way through the first painting, my 9 year old son turned to me and whispered “this is really incredible”. I knew then when we got home I’d be needing to get the paints out for him.

The music was beautiful and provided the perfect backdrop to the painting. The whole audience was entranced by James and during the hour long performance he produced 10 beautiful paintings. It was over all too soon; but in keeping with the hands-on vibe of the day, the orchestra invited the audience to come and have a closer look at the instruments and learn a bit more.

James was thronged with people, we had brought along one of his books to sign so we hung back a little. James very kindly gave us one of his practice paintings and chatted with my boy a bit. He was thrilled and that night went to bed clutching his signed book.

The RNCM Young Explorers series is aimed at children aged 3+. but younger ones are welcome too. My 9 year old was transfixed by the whole thing and I would absolutely take him back to another performance. I think it’s fed his imagination and sparked a few creative thoughts in his (currently Minecraft obsessed) head. I loved it and will be keeping my eyes peeled for similar performances in the future.

Tickets cost from £6 and you can find details of future concerts here.