This month we received a Transformers: Robots in Disguise Power Surge Optimus Prime and Aerobolt to put to the test. Optimus Prime is the leader of the Autobots and as a result, on every Transformers fan’s wish list. The small boy was no exception, and has long wanted an Optimus Prime of his own.

The Transformers: Robots in Disguise Power Surge Optimus Prime and Aerobolt is no ordinary, bog standard Optimus Prime. Yes he transforms like other Optimus Primes (and he does it in 5 pretty quick to learn steps), but this Transformer has a “power surge mode”. More of which later. 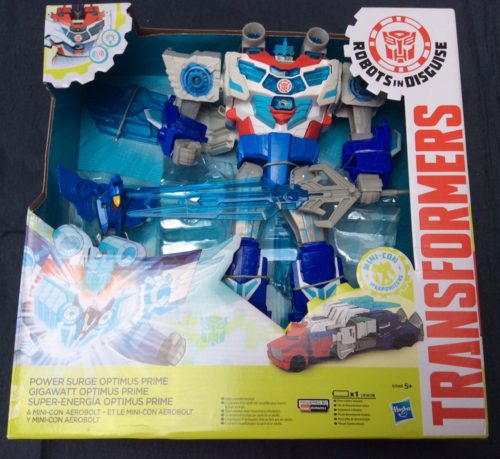 Optimus is well packaged in a sturdy box and is held in position with strong string. It didn’t take us long to release him so we could start playing with him. He is made from strong plastic, as someone who remembers playing with metal Transformers in the 1980’s, I did inwardly wince slightly when I transformed him, thinking I could easily snap him, but I didn’t and after a couple of weeks of robust play he’s still absolutely fine. 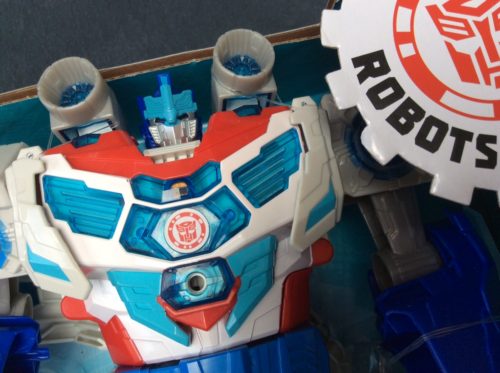 It’s great that there is a battery included already (1 AA if you need to replace it), so he’s ready to go as soon as you get him out of the box. Optimus Prime is big, he’s the biggest Transformer toy I’ve ever seen, he’s a statuesque 11 inches tall! The instructions are pretty easy to follow and you can transform him from figure to truck in 5 steps. The truck cab isn’t attached and you have to clip it onto the truck. I do worry that the cab could end up getting lost somewhere in the house. 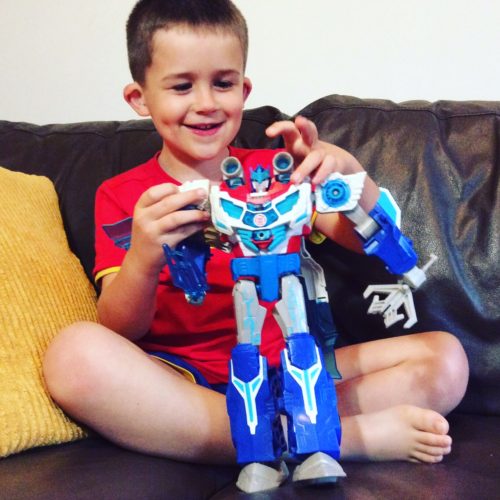 Optimus Prime comes with an Aerobolt, this is a Mini-Con and you attach him to Optimus and activates the Power Surge mode, helping to convert your Transformer into a weapon. Because the Aerobolt has wings he can help your Transformer battle in the air.

Optimus Prime has pop-out cannons and wings, lights and a selection of sounds. He has four different modes of play: robot mode, vehicle mode, flight mode, and Power Surge mode. Power surge mode is what made my son shout “that’s so cool!” So it must be. In power surge mode his wings open up, the cannons rise up and he makes a whole load of different battle sounds.

There are a few things you need to know when you get your Transformers: Robots in Disguise Power Surge Optimus Prime. Firstly, his feet fold out underneath, have a look and just unfold them otherwise he will never stand up by himself. Secondly there is a button behind his head which you can press to make the sounds.

The Transformers: Robots in Disguise Power Surge Optimus Prime is for children aged 5+ and my nearly 6 year old LOVED it. He did struggle a bit to transform him, so smaller ones may need a bit of help with that. However once he was shown a couple of times he more or less got the hang of it. 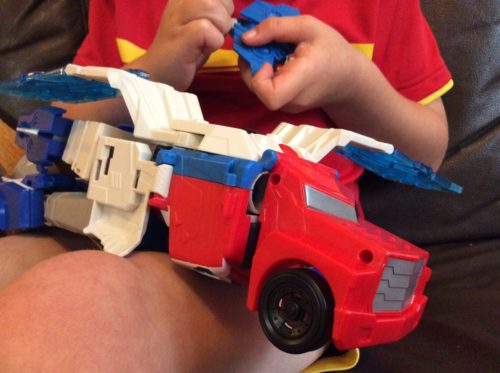 Optimus is robust and has stood up to some very rough play. He’s been brilliant for his imagination, I’ve often found my son immersed in an imaginary battle between the Autobots and Deceptacons in his bedroom.

He’s not cheap, his rrp is £50 but I actually think he’s worth the money, and as always there are deals and discounts to be had if you shop around. I found him for a little over £37 on Amazon.

The Power Surge Optimus Prime and Aerobolt is a huge hit. He’d make a fantastic Christmas present and I don’t think you’d be disappointed if you loved Transformers and you were given this for Christmas. I know I have one very happy boy on my hands.

Disclosure: We received the Transformers: Robots in Disguise Power Surge Optimus Prime and Aerobolt for the purposes of writing this review, all opinions and images are our own. Contains Amazon affiliate links.