Exploding Kittens is a highly-strategic, kitty-powered version of Russian Roulette. The rules are pretty simple and they are pretty simple to pick up. We’ve played a few quick-fire games and they’ve been great fun. 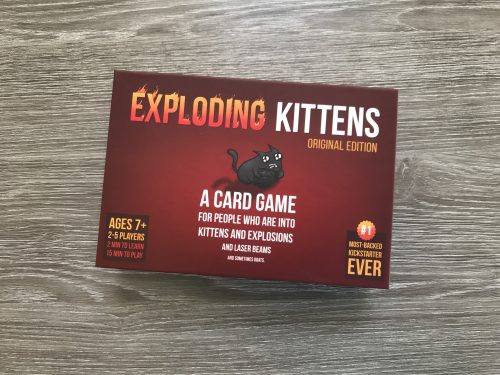 The box comes with 56 cards and a set of instructions. There are several different kinds of cards which you can play; Exploding Kitten cards, Defuse, Nope, Attack, Skip, Favor, Shuffle, See The Future and four different kinds of Cat Cards. They’re fairly explanatory, but if you’re not sure the cards have what you can do with them written on them.

Basically, if you explode you lose. If you don’t explode you win. All of the other cards will help to lessen the chance of you exploding. It’s great fun, really strategic and sneaky.

Exploding Kittens is for players aged 7+ and for up to five players, though expansion packs are available. This game is both perfectly pitched at my 7 year old, but still fun enough for grown ups to play. I confess my husband and I have had a few sneaky games by ourselves and enjoyed it just as much.

Exploding Kittens is an ideal game to travel with or to take out to entertain the family when our for a meal or something. It’s compact and requires some strategic thought (for strategic, read devious and sneaky). Each game is pretty quick and takes 10-15 minutes on average. 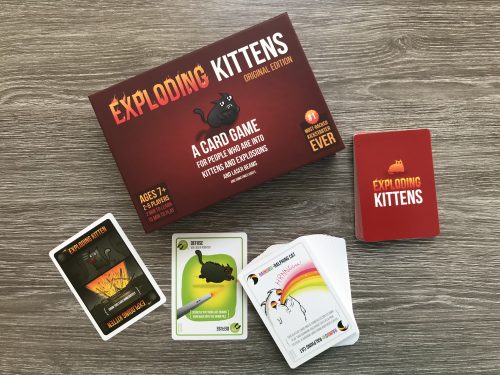 The Original Edition of Exploding Kittens costs around £19.99 and I am a total convert, I can see now why several friends have raved about it. It’s available from a wide range of retailers and online too.

We were sent Exploding Kittens for review for the Asmodee UK Blogger Board Game Club. All images and opinions are our own.