We recently put the Captain America Civil War Blaster Reveal Shield to the test and it was a roaring success. The small boy and his superhero loving friends loved pretending to be Captain America and I had a hunch they’d enjoy pretending to be Iron Man too. Thankfully we were sent the Iron Man Slide Armour from the same range to try out, but what did the super-boys think? 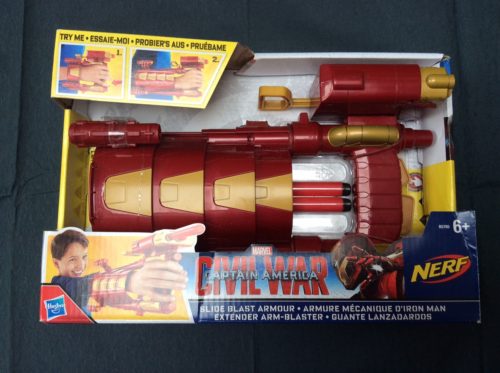 The Marvel Avengers Captain America Iron Man Slide Armour is really cool. It really is. It is in Iron Man colours and is instantly recognisable as an Iron Man product. With the press of a button on the handle, the armour opens and expands up your arm revealing a hidden Nerf blaster. Press the other button and the blaster fires one of the two Nerf darts.

The armour comes with two Nerf darts, which isn’t enough, but they are widely available and we picked up an extra pack from our local toy shop for a few pounds. 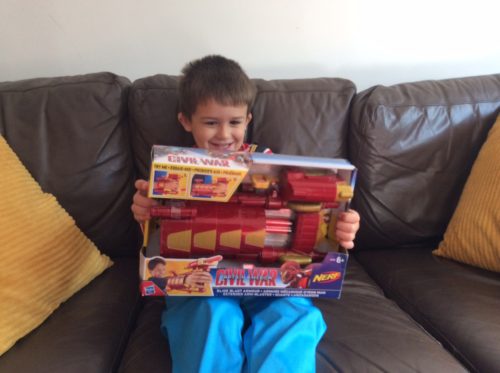 The Iron Man Slide Armour also has space to store two additional darts, but we found them rather flimsy and one fell off and got lost in the park. Which is a shame because otherwise this is a really sturdily made and robust toy. Thankfully the bit which fell of is completely non-essential so we’ve not missed it.

It feels really cool to use, I tried it out myself and the armour fit well across my arm and was quite lightweight. My son loved it and had to be talked out of going to bed wearing it. 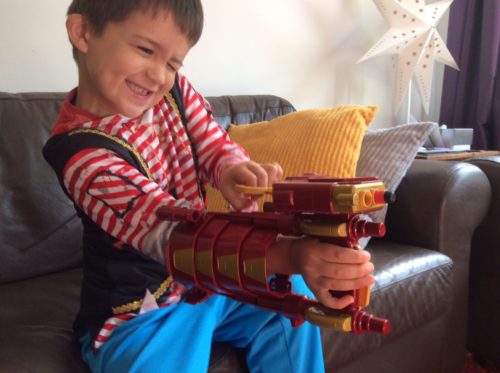 The Iron Man Slide Armour is suitable for ages 6+. My nearly six year old and his slightly older cousin loved play fighting with it and the Captain America shield. It’s a great toy for superhero role play and I can say from experience that the Nerf darts don’t hurt you if you do stray into the line of fire.

Just like with the Captain America hidden blaster shield, the boys role played brilliantly with this Iron Man armour with blaster. We were impressed by how much something like this enhanced their superhero play and kept them entertained and actively running about. I can see both boys being fully decked out like Captain America and Iron Man by Christmas, complete with shield and armour!

Disclosure: We received the Avengers Captain America Iron Man Slide Armour for the purposes of writing this review, all opinions and images are our own. Contains Amazon affiliate links.