Since the advent of mobile phones and text messages people have been taking things the wrong way, reading tones of voice and attitudes into even the most innocuous communications. The written word is ripe for misunderstanding. These days many text messages and social media updates are filled with emoijis which are causing communication confusion across the board.

This month University of Minnesota has published a study which explored how emojis look on different devices, from Android to iOS and whether the differences in emoji styling can lead to different interpretations. They looked in particular at the “grinning face” emoji which on some platforms looks like a genuine smile, on others an awkward grimace.

Emoji usage has always fascinated me and I can spend ages examining the nuances of each smiley face to make sure I’m selecting the right one (sad but true), but the smiley face I send from my Apple iOS device may appear very differently on my friends Android phone.

Earlier this week there was a murder in a town a couple of miles away from where I live. I was watching the tragic story unfold in a Facebook group and one commenter simply added three of these emojis to the post… 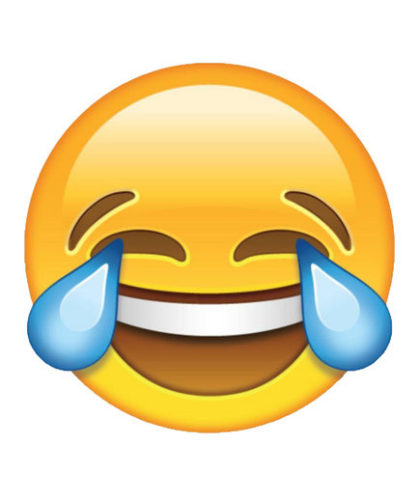 I was naturally shocked at the Facebook users comment, which to me appeared that she’s found the fact that someone had just been stabbed to death in their own home amusing. It irks me that so many people use this emoji during sad circumstances and according to the University of Minnesota study, this is one of the most misunderstood emojis. I’ve looked at the chart showing all of the different versions of this emoji and it is clear on each device that this is a happy person crying with laughter. But maybe people can’t see beyond the tears. 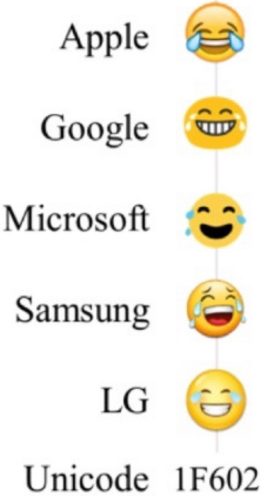 Just to double check that it wasn’t just me who saw this as a crying with laughter emoji, I threw the question out to the crowd with a Twitter Poll. 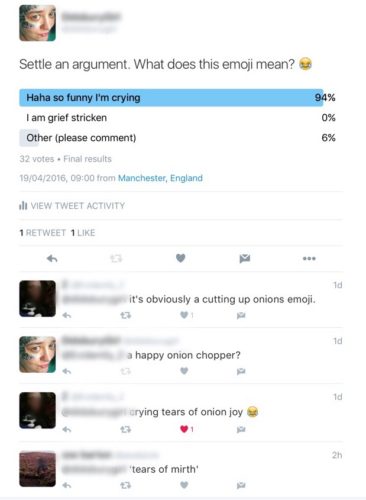 I’m not sure how well my results would stack up against the University of Minnesota study, it was a Twitter Poll and I suspect Twitter users are slightly more emoji savvy than Facebook users, and have perfected the art of brevity in their tweets, with tweets being limited to just 140 characters.

Just 32 people responded with 94% agreeing with me that it means “haha so funny I’m crying” and the other 6% saying “Other” with suggestions including happy to be chopping onions and tears of mirth. It is clear from my less than scientific sample that 100% of respondents didn’t think it was the correct emoji to use as a response to a murder.

If a picture can say a thousand words, an emoji can be a handy shorthand to explain an emotion, a reaction or a feeling. If you’re using emojis it’s worth bearing in mind how they may be seen differently by others and and how getting the emoji wrong could make you look. Sometimes it’s easier just to type “that’s so sad”.

7 thoughts on “Are you making Emoji Misunderstandings?”