A few weeks ago I went to my friend Lucy’s house for one of our informal craft nights. We all bring cake and wine and the host sorts out a craft for us all to do; so I can’t claim this idea as mine but the creation is mine. Lucy bought some cardboard letters, some hessian strips and some embellishments and we set to work, each making our own hessian monogram letter.

During the evening we all worked on our own letters. We all had the same materials to work with, but we all produced quite different things.

Hessian is a strong, coarse fabric made from hemp or jute and is used for sacks and upholstery. It’s also commonly known as jute or burlap. It’s also really cheap. 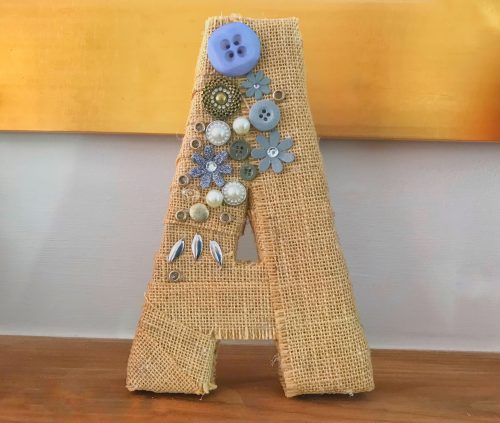 Make Your Own Hessian Monogram Letter

You will need:
A cardboard mache letter
Natural jute fabric roll, you will need 2 rolls per letter
A hot glue gun and glue sticks
Embellishments – buttons, sequins, beads, whatever you fancy
Scissors

How to make your hessian monogram letter:
To begin with, it’s best to work on top of a craft mat or a large-ish piece of cardboard. This can get messy and I sometimes find the glue from the glue gun gets everywhere.

You need to wrap your jute fabric strips around your letter, so think about how best to do this and where you think it would be best to start. It’s better to slightly overlap the layers if you can. I was covering the letter “A” so I decided to start with the hardest bit, which for me was working my way around the hole in the middle.

Using the glue gun, glue as you go, carefully pressing the jute into place taking care not to burn your fingers. This will take some time to finish, but it’s nice to zone out and concentrate on the task in hand. I decided once I’d finished to add an extra strip of fabric down one side of the A just to break up the look a little bit. 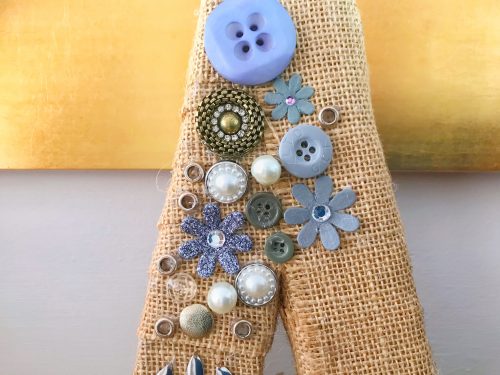 I knew my letter would be propped up on the mantelpiece. If you wanted to hang it on a wall you could attach a loop or hook to the back and use that to hang it up.

This Hessian Monogram Letter craft is really quite easy to do. Wrapping the hessian around the letter is the time-consuming bit, but I’m pleased with how it turned out and it looks good on my mantelpiece. 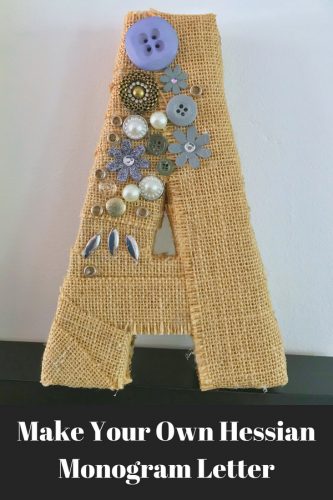 One thought on “Crafts: Make Your Own Hessian Monogram Letter”