Vikings are very much the flavour of the month in our house. We’ve been doing a lot of reading about Vikings, and the boy is learning about them at school. What better way to bring some Viking learning to life than to take a trip to York and visit the JORVIK Viking Festival.

The JORVIK Viking Festival takes place every February, and the start of the festival fell during our half term. This year the JORVIK Viking Festival runs from 20 – 27 February 2019. It’s a family friendly festival and the largest event of its kind in Europe. There are historic encampments, talks, tours, combat displays and much more, all during half term week. This year the festival has a special focus on the untold story of women in the Viking age. 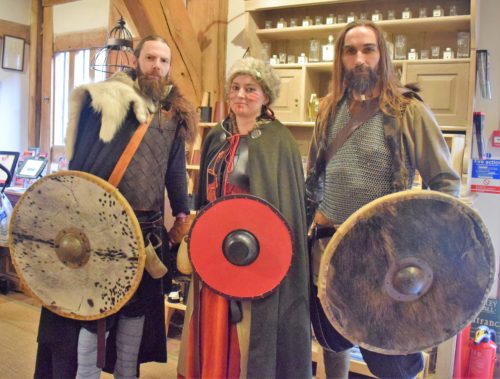 We arrived in York bright and early on the second day of the festival. Parking near the JORVIK Viking Centre, we were surprised at just how busy it was so early in the day. Just after 9am there were queues stretching around the courtyard to get into the Jorvik Centre. If you are planning to go, it’s probably an idea to pre-book fast track tickets beforehand.

Visiting the JORVIK Viking Centre is a great place to start. The Viking guides talk you and walk you through the archaeological dig; you go on a time travel ride which takes you through a Viking village and all life within it; and there’s a fascinating artifacts gallery to explore.

During the JORVIK Viking Festival, there are a number of areas within York where you will find Viking goings on. All of the events and activities are listed on the website, but we picked up a booklet which listed everything and had a map, and we found that much easier to follow. 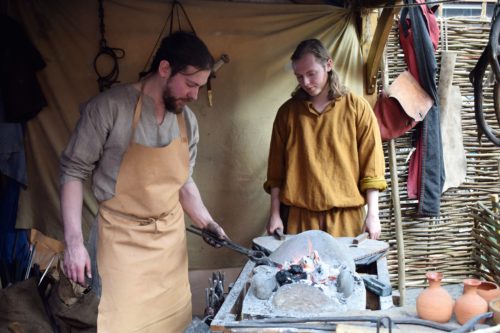 From the JORVIK Viking Centre we went to nearby Parliament Street where the Viking Encampment was located. The encampment is set up with Viking stalls, where you can watch craftsmen make wooden bowls, jewellery and Viking combs, as well as blacksmiths at work and even a Viking tattooist. At one end is a large tent where little ones can try their hands at making some Viking crafts. There’s even a Viking long-boat to have a look at. We really loved this area and returned to it several times during the day, the boy and I especially liked watching the wooden bowl making. 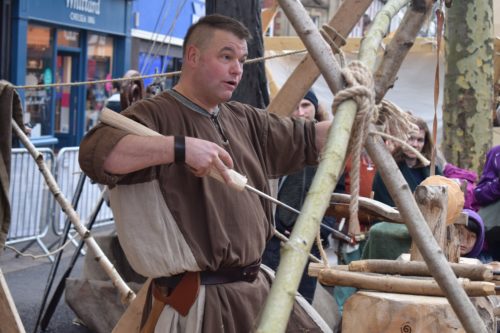 Before lunch, we visited Barley Hall, which is tucked away in the backstreets of York. Barley Hall is a reconstructed medieval townhouse which was originally built around 1360 by the monks of Nostell Priory near Wakefield. Extended in the 15th century; Barley Hall went into a slow decline and was eventually bought by the York Archaeological Trust in 1987 and restored into the museum we see today.

It’s a really interesting museum, and during the Viking Festival, it is playing host to a number of special events and exhibits. We went along to see the Seers and Shamans: Magic in the Viking Age exhibit. There were lots of interactive activities for children to do, and lots to interest adults. It’s such an interesting museum, especially if you’re interested in domestic history.

Moving on from Barley Hall, we headed over to the St Sampson’s Square Stage to watch a Viking Shield Maiden do battle with a Viking Warrior. This was really interesting and my boy loved watching them battle. They battled and then talked us through each move and why they’d made each move. We learned a lot about how Vikings fought, and it was good to see some axe wielding and sword swinging close up. 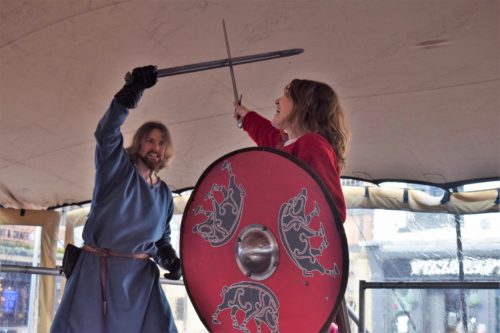 We’d filled a whole day with Viking Festival fun, but somehow we’d hardly scratched the surface. There was so much more that we wanted to do and we were all regretting not booking a hotel for the night and staying another day. Next year perhaps.

The programme of events for the JORVIK Viking Festival is packed and varied; with something for every kind of Viking enthusiast. If you’re visiting it’s worth deciding beforehand what you can’t miss and what you’d like to see and do. Book ahead for anything the programme recommends you book for and do spend some time on Parliament Street, it’s brilliant.

The full programme of events for this years JORVIK Viking Festival is available at  www.jorvikvikingfestival.co.uk 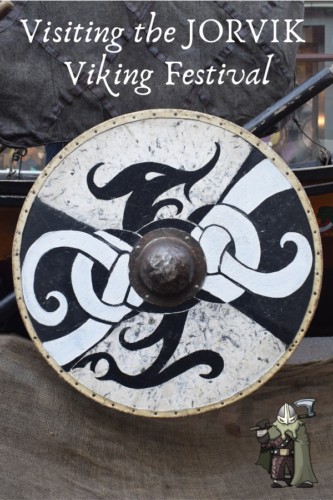 Read my preview of the 2019 JORVIK Viking Festival here.