AD/Complimentary Meal. On Friday night I took my boy for a mother and son date night. We took the tram to Media City (Salford Quays) and went for a meal at Capocci’s Pop Up Restaurant which is located in the piazza near the BBC building.

Capocci’s is in what appears to be a converted shipping container. It’s under cover, but outdoors; so if you’re dining, please do take your big coat as Manchester is beginning to feel pretty autumnal already. 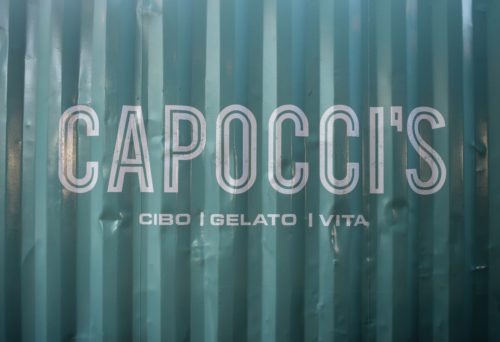 From breakfast to dinner, Capocci’s serve a range of traditional Italian recipes and the pop up is proving particularly popular with the locals. Capocci’s was pretty busy when we visited, with lots of people dining in, or ordering takeaway pizzas. 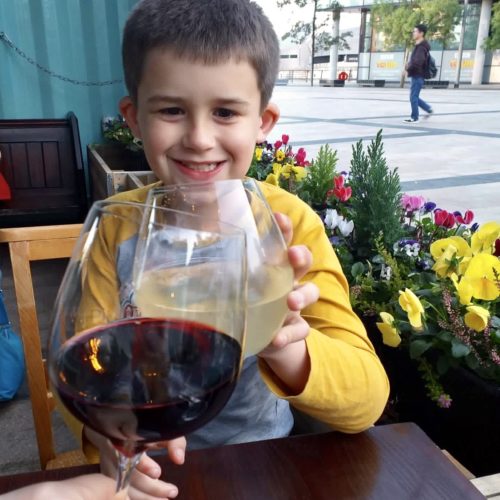 When we arrived, the boy was famished after a busy day at school, so we ordered our food straight away. He ordered from the kid’s menu, starting with pane all’aglio – caramelised garlic and mozzarella bread, followed by pollo Milanese – breaded chicken and pappardelle pomodoro. I ordered the burrata which came with a salad of grilled vegetables, followed by the pizza margherita classico. 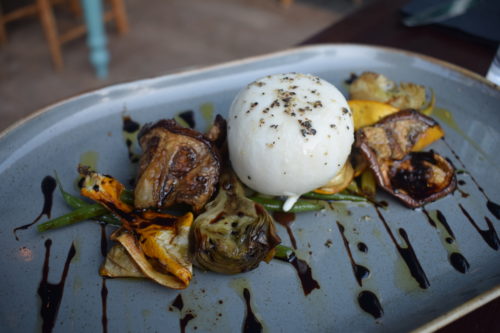 Unfortunately there was a mix up with the order, so all the food came at once, which took a while to come out of the kitchen and my son was a bit beyond himself with hunger by the time it arrived. The waiter apologised for the mix up and offered us a complimentary dessert, more of which later.

Having so many dishes in front of us at once was quite over facing, and as a result the garlic bread mostly got left behind. It was nice bread, but without the cheese it definitely needed some oil or something to dip into. 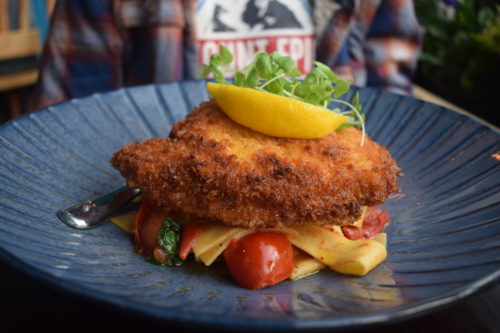 The boy loved his chicken, it was beautifully cooked, with crispy breadcrumbs and lots of lovely fresh pasta. He left the tomatoes, but I snaffled those up. I was impressed to find such a grown up dish on the kid’s menu.

My burrata was absolutely delicious. Beautifully silky mozzarella with some of the loveliest grilled vegetables I’ve ever had. The dish was missing ingredients which were listed on the menu, which was a shame, but it was one of the tastiest things I’ve eaten in a long time. 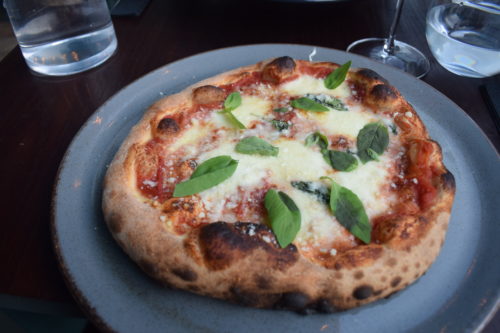 My pizza was good. It had a lovely thin and crispy base and a thick layer of sauce and cheese. It was nicely priced at £7.95 and I can see why the pizzas would be a very popular takeaway option.

As we had been promised compensatory gelato, and gelato was the speciality of the house, we went ahead and ordered some for pudding. He ordered the coppa al cioccolato – chocolate and vanilla ice cream sundae with chocolate and caramel sauce, whipped cream and a chocolate flake. I ordered a scoop each of the raspberry and lemon sorbets. The gelato was very delicious, and well worth stopping by for if you want a sweet treat. 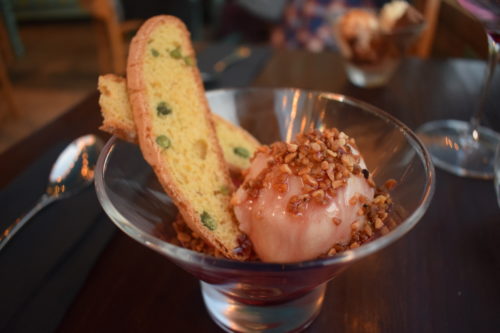 As we came to leave, our original waiter had left and not passed on the message about the mix up, so we were billed for our gelato; this rankled a bit as we wouldn’t have ordered it otherwise. I just settled the bill as it was quite late and I needed to get him home to bed.

The service was friendly and attentive; but the mix up over our order meant I had to manage a very grumpy and hungry boy for longer than I would have liked, and the rescinded offer of complimentary gelato wasn’t a great way to end the meal.

The food at Capocci’s was delicious. I would have liked to have seen more proper vegetarian options on the menu; but what I had was excellent and I would eat there again. It’s a really lovely spot to have a pop up restaurant, as the day turns to night, you get to enjoy one of my favourite views of Salford Quays – the lights from The Lowry and the Imperial War Museum glistening on the water. It’s a brilliant spot for a romantic dinner for two, or a family meal with the kids; plus it’s dog friendly!

Capocci’s Pop Up Restaurant is only in Manchester until 22nd September; so if you fancy it, it’s worth getting down to Media City pretty pronto! For more information and to take a look at their menu, visit their website.

We were given a (mostly) complimentary meal in exchange for this review. All images and opinions are our own.

One thought on “Dining Out: Capocci’s Pop Up Restaurant, Media City”