Breakfast, especially at the weekends is a pretty big deal in our house. I like the boys to go out and face the day with something in their bellies and I like the simple act of sitting down as a family and starting the day together. Admittedly this doesn’t happen that often during the week, the boys tend to shove a bowl of cereals down themselves before dashing out of the house, leaving me to stack the dishwasher with their dirty pots. Weekends are a very different thing indeed, with pots of coffee, nice juice and something a bit special.

Monday to Friday the boys tend to eat Cheerios, I like Cheerios because I think they provide a pretty balanced breakfast, with some complex carbohydrates and added vitamins, it’s a good start to the day. At weekends we like to mix things up and try new things. We were sent a selection on Nestlé Cereals to try, so we planned a buffet breakfast of cereals. Which one would we like best?

We tried the following Nestlé Cereals: 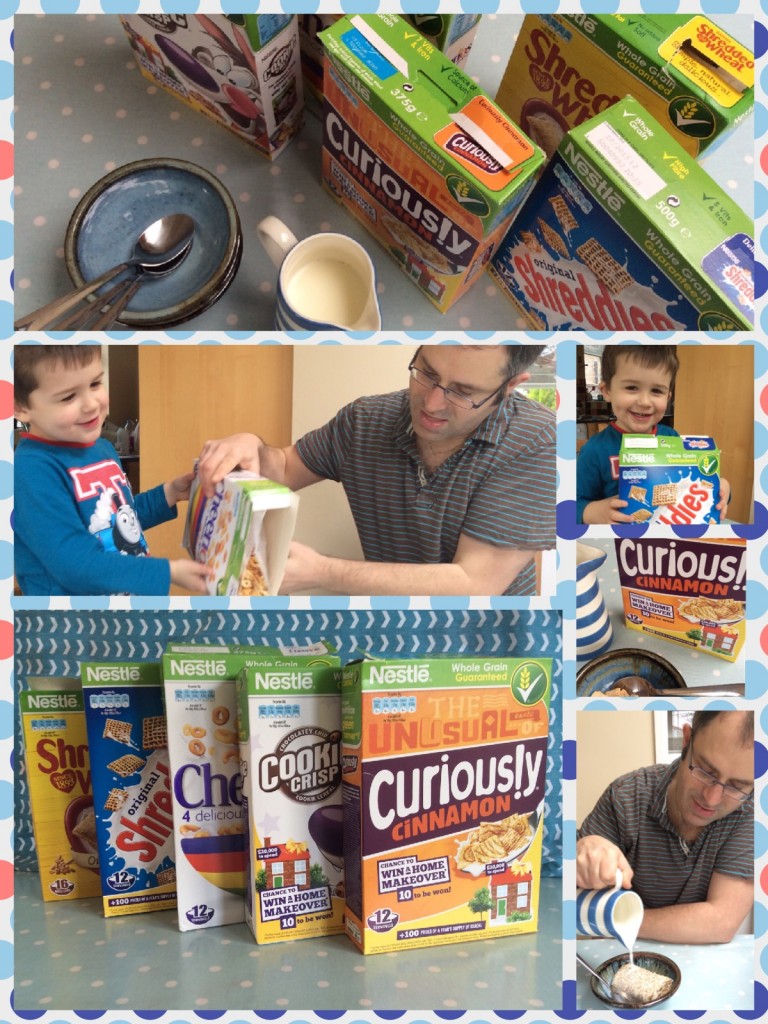 We began our Nestlé Cereal Challenge by each selecting a cereal and pouring a small bowl (we had five different cereals to sample, we didn’t want to overdo things). The small boy thought he’d like the Nestlé Cookie Crisp the best (with it being wholegrain cereal disguised as little chocolate chip cookies), but ended up choosing the Nestlé Shreddies. I really liked the Curiously Cinnamon, but ultimately plumped for the Shreddies as my most favourite, whilst hubs enjoyed the simplicity of the Shredded Wheat but fell for the charms of the Curiously Cinnamon.

The Curiously Cinnamon is a bit different and a really great cereal if you like cinnamon, which can be a bit of a love/hate flavour. I tend to eat my cereals as a late night snack so these really hit the spot when you need something a tiny bit sweet but filling.

Nestlé Cereals contain essential whole grains and are fortified with vitamins and minerals designed to help get your day off to a good and nutritious start.

It was a really lovely way to start the day, and helped turn breakfast into a fun little challenge. It’s a good way to try new things and find new favourites. I know we’ll be adding the Curiously Cinnamon to our shopping list and I’ve rediscovered my love of Shreddies, so they are well and truly back on the menu. Thank you Nestlé for spurring us on to try new things. I think a buffet breakfast challenge will be on the cards again one weekend soon!

Note: We were sent a selection of Nestlé Cereals free of charge for review purposes. All images and opinions are our own.