Over the Bank Holiday weekend I hopped on the tram into Manchester in search of a good time and some noodles. The Metrolink had just that very weekend re-opened the St Peter’s Square tram stop, meaning visitors from the southside no longer had to schlep across town on foot, hallelujah. I met up with some friends and headed straight to Wagamama Spinningfields (via a cocktail bar) for a fix of noodles.

We thought we would try a couple of healthy juices before our evening began in earnest. I opted for the “positive juice” containing pineapple, lime, spinach, cucumber and apple and my friend opted for the “repair juice” containing kale, apple, lime and pear. Both were delicious and even though they contained spinach and kale they were both sweet and vibrant. We very much enjoyed them. 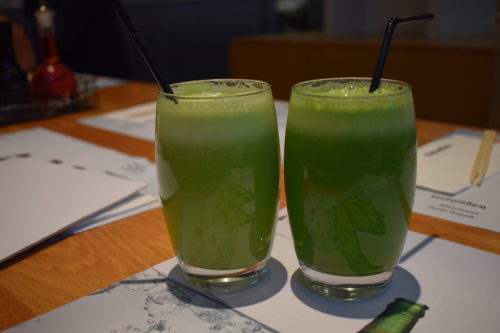 At Wagamama you order and it all comes out of the kitchen when it is ready, so you may be given your meal before your companion gets theirs, which is fine. We’d asked for our side dishes to be brought out first as starters and they arrived consecutively. This meant we could enjoy each dish separately as we were sharing them.

Greedily we ordered three sides to share – Mushroom onigiri, which were balls of sticky rice with mushroom, deep-fried in panko breadcrumbs and served with a spicy chilli and garlic sauce. They were similar to the Italian arancini, but smaller and tastier. They were soft and moist on the inside, slightly crunchy on the outside and bursting with flavour. These were a real winner.

The yasai steamed gyoza were five steamed yasai dumplings, served grilled and with a dipping sauce. I have these almost every time I go to Wagamama and these did not disappoint. Our final side was the crispy fried squid dusted with shichimi and served with a chilli coriander dipping sauce. The squid was soft and well cooked with a fiery hit of chilli, but not enough to make your Gran cry.

Onto the main courses and my friend was keen to try one of the new dishes on the Wagamama Spinningfields menu, the duck donburi. A donburi is a bit like the Korean bibimbap. It’s a big bowl of steamed rice stir-fried with shredded duck and mixed vegetables. Served with a runny fried egg on the top and side of kimchi. It looked absolutely delicious and once the egg had been mixed in it had a beautiful texture. My companion loved it and tried very, very hard to finish it all. 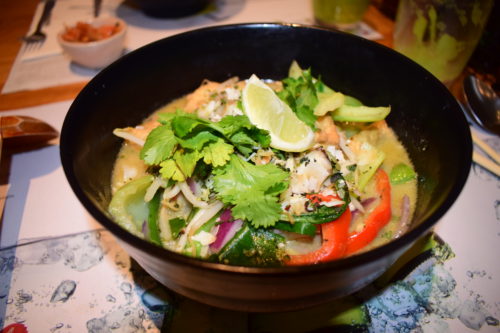 I opted for the yasai itame, a big fragrant bowl of rice noodles in a spicy green coconut and lemongrass soup with tofu and vegetables, stir-fried beansprouts, red and spring onions, bok choi, peppers, mushrooms and chillies, garnished with coriander and lime.

It was a bit like a Thai green ramen, spicy but with a tolerable level of heat for me. It didn’t skimp on the tofu and it was packed with vegetables. The broth was delicious, just thinking about it has my mouth watering now. If anything it was a perhaps a little heavy on the noodles for me, but I would definitely order it again next time. 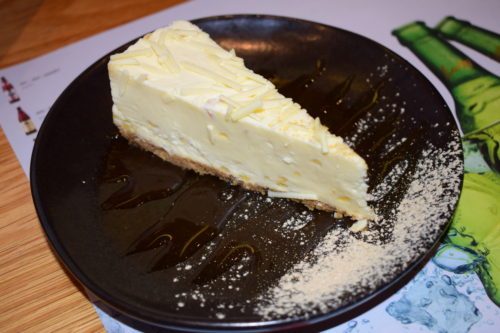 For dessert we decided to share a piece of white chocolate ginger cheesecake. I rarely eat cheesecake, I think I’m still scarred from eating terrible frozen cheesecakes in the 80’s, covered in sickly sweet sauce and soggy defrosted strawberries, this was very different.

The base was gingery and crunchy, the cheese smooth and fluffy and it was served with a kick ass chilli toffee ginger sauce (pro tip, don’t dip your finger in the mysterious powder on the plate and lick your finger, it’s powdered ginger and will blow your socks off).

The restaurant was refurbished less than a year ago and is really fresh looking, there’s a large area where you can eat outside if you want. I like that it’s the kind of place I could happily go for a bite to eat by myself, with the small boy and his dad, or with a large group of friends.

We had a very, very good meal, the staff were excellent; attentive and knowledgeable, recommending we try certain dishes and suggesting great beers to go with our meal. We’ve been Wagamama fans since the first time we visited one over ten years ago, Wagamama Spinningfields does not disappoint.

We were invited guests of the restaurant, but all images and opinions are our own.

Like Loading...
This entry was posted in Food, Manchester and tagged Manchester, spinningfields, Wagamama, Wagamama Spinningfields. Bookmark the permalink.