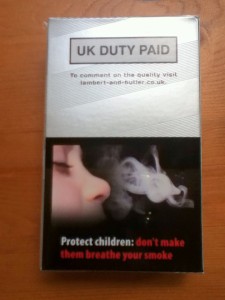 I gave up smoking in 2004 long, long before we even contemplated having a baby. It was the right thing to do at the time. I missed it but didn’t go back to it until earlier this year. My son was 2 and a half when I started smoking again. I’d had 18 months of complex physical and mental health problems and I couldn’t deal with the stress anymore, so I started borrowing cigarettes from friends, then buying packets and then I was a smoker again.

When I started again, I promised that I wouldn’t smoke in the house or when my son was around. I never did smoke inside, but I’d smoke outside and my son, my beautiful, innocent, impressionable son would come to the window and watch me smoke. Then he figured out how to open the door and a few times he came outside to be with me. He’s seen me smoke and I’m horrified about that. It makes smoking seem normal and something nice, normal people like Mummy do. It isn’t.
I knew I had to give up and Stoptober gave me a focus and the motivation to do so. I still miss it, but I know it was the right thing to do both for me and for him. I grew up with parents who between them smoked 60 fags a day, in the house in front of us kids, in the car with the windows closed, that was the 1980’s for you, smoke filled cars and no seatbelts.

Some studies have shown that on average, children of parents who smoke do less well at reading and reasoning skills compared to children in smoke-free homes, even at low levels of smoke exposure. That’s quite a sobering thought.

There are some people who think that parents who smoke near their children are committing some form of child abuse. I wouldn’t go that far, but it does potentially have serious health implications for the child. Both my brother and I developed asthma. I also had eczema and chronic ear infections which have now been linked to being in a smoke filled house.

My Dad has chronic obstructive pulmonary disease (COPD) and will likely live a shorter life for having that. He no longer smokes, but 40 plus years of heavy smoking have taken its toll on him. My son who adores his Grandpa will lose him sooner than he should because of smoking. My Mum still smokes and she stinks, she has health problems, she won’t give up.

Like with most things I have a live and let live attitude, do what you want as long as you don’t harm others. But the problem with smoking is it does harm others. You don’t have to be sat in the same room as them or even sat in a smoke filled car in the 1980’s; smoke will filter through, permeate, linger and harm.

If you’re pregnant or if you’ve got kids, you will have been lectured to the moon and back by GPs, Midwives, Health Visitors any healthcare professional who has crossed you path. Nothing I can say will make you quit. But if you’re thinking about it there is plenty of help and support out there if you need it. A good place to start is with your GP or pharmacy.

Quitting isn’t easy, but I guess seeing your beautiful child wheezing, struggling to breathe and puffing on an inhaler is much, much harder.

I was originally asked to write this article for a now defunct on-line magazine. It seemed a shame that it never saw the light of day – so I’m publishing it here on my blog instead.

Like Loading...
This entry was posted in Health and tagged smoking, smoking and children, Smoking cessation. Bookmark the permalink.