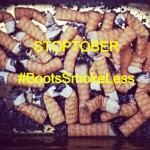 It was suggested that I blog an update on how I was getting on now a whole month has passed since Stoptober. Firstly I’d like to thank everyone for their support, comments and good wishes over the last few months, it’s been cracking.

To recap. I signed up to do Stoptober with the help of Boots and their Smoke Less campaign. It took me a whole 12 days to work up the nerve to actually stop. I used nicotine patches for about 10 days, then forgot to put one on and never bothered after that.

I had one very drunken slip up which made me ill, and put me off the smokes (hopefully) for life and that was it. Looks easy-peasy written down like that doesn’t it? It really wasn’t.

I don’t think a day has gone by that I’ve not thought of it. A few days I’ve seriously considered buying a packet and I’ve had a cig in my hand on one occasion, which was swiftly snatched from me and crushed up by a well-meaning, if incredibly annoying friend.

I’ve given up though and that was the point. I appear to be laying down a bit of timber, but I’m not sure if that’s giving up smoking or the approach of winter and all its stodgy food. Either way I need to stop eyeing up stew and dumplings and make strides with the salad.

I’ve probably saved a fortune since. A quick bit of mental maths shows than since October 12th I’ve saved around £185 on cigarettes. Blimey! That’s quite a lot. I wish I’d had the sense to put all that in a jar now. looking back I’m not really sure how I ever found the money to smoke or what I now spend that money on.

Would I do it again? Absolutely. Will a day ever go by where I don’t miss it? I doubt it. No regrets? No, none at all.