Things to do in Manchester: GMP Museum

Manchester is a great city to live and work in and it’s equally lovely to visit. There’s so much to see and do and we’re blessed with a rich and interesting history. Manchester has a wonderful selection of award winning museums to visit, The Museum of Science and Industry, The Peoples History Museum and Manchester Museum to name just three. There are a number of smaller, less well known museums dotted around Manchester. We visited the GMP Museum in January to find out more about the history of the Greater Manchester Police. 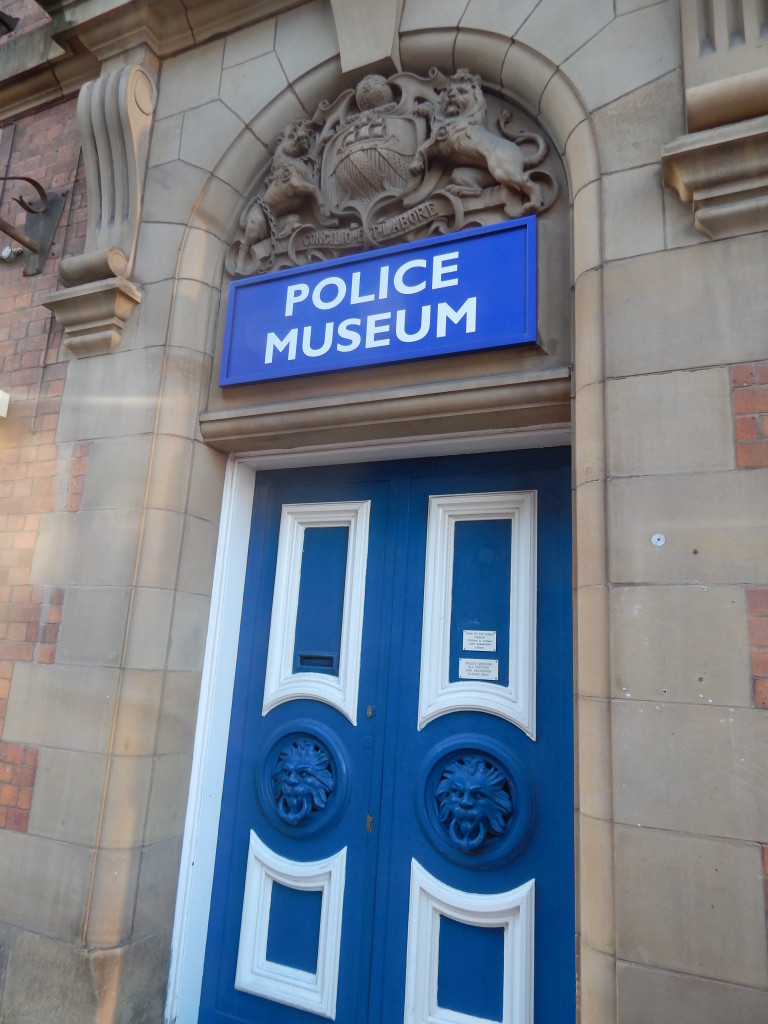 The GMP Museum in located on Newton Street on the edge of Manchester’s Northern Quarter and is just a few minutes walk from Piccadilly. The GMP Museum is open on Tuesdays and has special events and different opening times during school holidays.

The museum has six main areas and is located in an old police station, so there are lots of original features, more of which later. We were given a tour by the lovely Katie who was very knowledgeable and engaging. First off my four year old was given a special police hat to wear and a police badge to wear during the tour, he loved this and I confess I had a bit of hat envy. 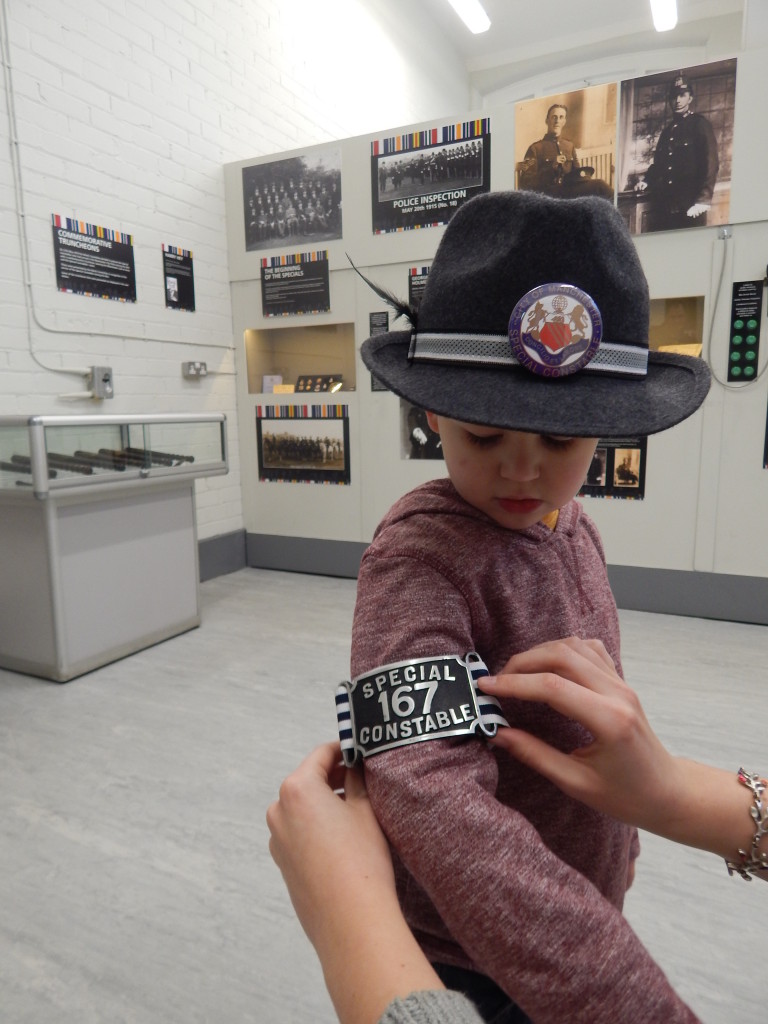 The first room we looked at was a special exhibition to commemorate the centenary of the first world war. We found out about the fascinating history of the ‘specials’ who took the place of policemen who had left to fight in the war. This room alone is worth a visit.

We then had a look around a room which showcased all the different uniforms in the GMP over time, from the very first uniforms, to really very lovely 1960s threads, to the modern day uniforms, which admittedly are less stylish but so much more practical. We looked at truncheons and handcuffs, did you know that a ladies truncheon was much smaller than the mens’ truncheons, so most WPCs used to hit assailants with their handbags. True story!

We moved on to what was probably one of my favourite rooms, it housed a replica 1960s detectives desk as well as a fairly grim collection of murder weapons, interesting information about famous policemen and a couple of infamous criminals. They also had a corner dedicated to the Strangeways Riots which I remember well. They had a cell door which had been ripped off its hinges as well as an array of home-made weapons that were found after the riots. 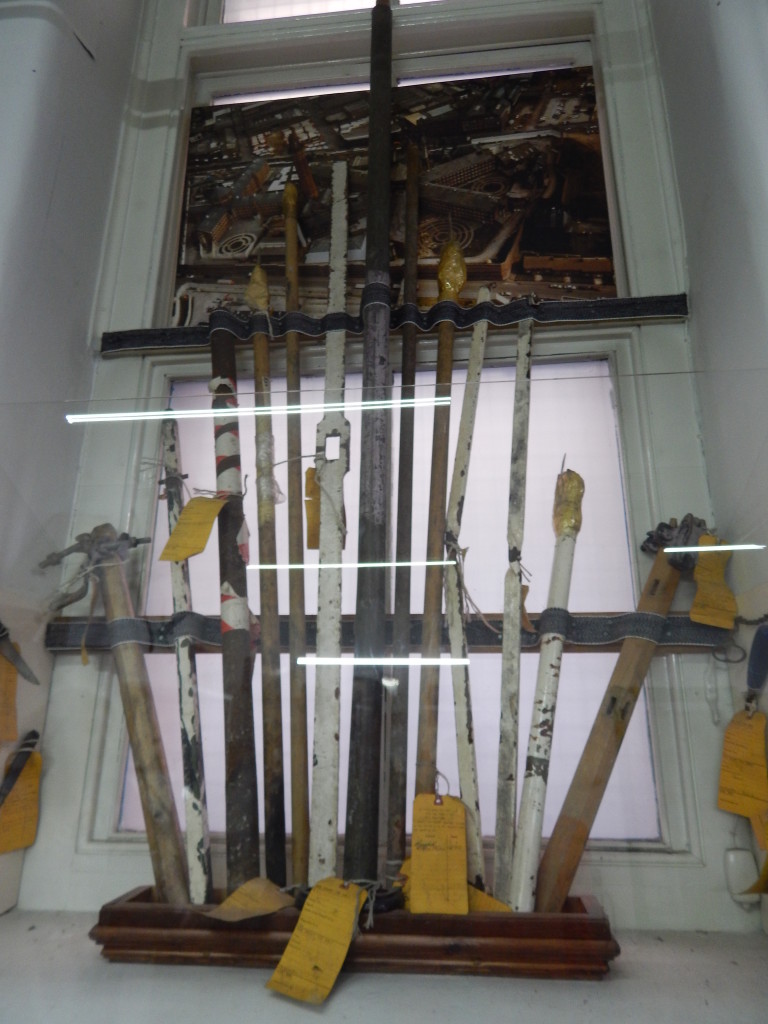 Home-made weapons from the Strangeways Riots

We then looked at police transport, we met a huge model horse, looked at a collection of motorbikes which were used over the years including a trail bike, as well as a huge collection of model cars which have been accurately painted as little replicas, the small boy loved these, he’s obsessed with police cars.

We then moved to a really special part of the museum, they’ve got the original Victorian charge office. This was such a fascinating room, the original charge desk has been worn by years of people leaning on the desk while they’re being charged with various crimes. Katie talked us through the history of the room and some of the things that went on there. She then showed us the original police cells and even locked us inside one. They had two wooden beds, but on busy weekends each cell could house up to 12 prisoners, with small children being locked up with the adults. Men and women were kept separate, but it was a very grim thought being confined in the darkness, with children who had stolen a loaf of bread locked up with an adult who might have murdered someone, and once the cell doors swung shut it was very dark and very spooky.

Thankfully we managed to escape being locked up for more than a minute and we ventured upstairs to see the courtroom. This wasn’t an original feature of this particular police station, but this courtroom had been moved in its entirety from Denton. It was a beautiful room, though very imposing. It’s fantastic that they’ve managed to save the courtroom and retain it as a resource in the museum.

The GMP Museum is a great resource for kids to explore and learn about the history of the police and the criminal justice system. I remember visiting with school as a child and it made a very big impression on me. The exhibits are always changing, there are plans for some refurbishment and some of the exhibits will be expanding. It was a thoroughly interesting afternoon out, we all got something from it, we all learned a great deal and had fun doing so.

Find out more about the GMP Museum on their website.

5 responses to “Things to do in Manchester: GMP Museum”