At 3am this morning the screaming and shouting started. The small boy had woken up and was engaged in complex negotiations with his dad about returning to bed and going to sleep. The small boy has a bad cold and is what can only be described as incredibly overtired.

I lay in bed and listened to the back and forth between father and son. After 20 minutes or so of tantrums and tears I intervened. It was clear it was my turn to play bad cop, so I marched in, confiscated the Lego he was arguing over at that moment and threatened to put all of his toys in bin bags unless he got into bed.

This did not work, he sat on his bed cried a bit harder. I went back to my room and waited for the next stage of negotiations to fail. This is ridiculous, he’s perfectly capable of going to sleep and I’ve never heard him behave like this for so long. I thought about it while I listened to them.

It was my turn to play good cop. My boy was poorly and tired. When I’m poorly and tired I want someone to cuddle me, stroke my hair and sing soft kitty to me. I warmed up his hottie, made a little nest for him under the blankets on my bed and welcomed him in for a cuddle and some love from his mummy.

Within minutes his tears had dried and his breathing was slowing. I squeezed him a bit tighter and told him I loved him and that I’d always look after him. He was asleep and snoring quietly to himself soon after. What’s more he slept past his normal 6am wake up and right through to 8am which is tremendous.

Today I resolve to love my son a little bit more and give him the things that I want and need. Love, friendship, consideration, affection, laughter, happiness, safety, freedom and respect. Last night at 3am I lost sight of the poorly little boy with needs and was more concerned with getting the household back to sleep. This is not a licence for him to get away with 3am tantrums every day, but a reminder to me that I need to think about why he’s behaving badly and deal with the cause and not the effect.

Today we’re having a lazy day with lots of cuddles and calpol. Tomorrow is a new and hopefully brighter day. 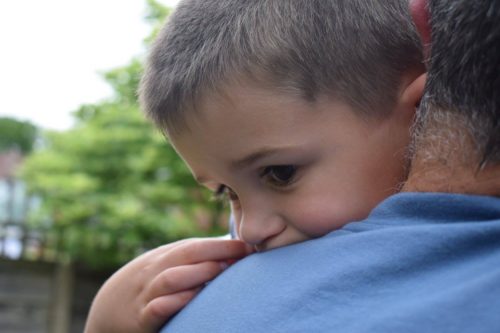 Like Loading...
This entry was posted in Parenting and tagged Bad cop, Good cop, Love, parenting. Bookmark the permalink.