Since high street bakers Greggs launched their vegan sausage rolls, they’ve been the talk of the town. My local Greggs sells out of them as quickly as they put them out, I’ve managed to get my hands on them only twice and unlike Piers Morgan, I really like them. 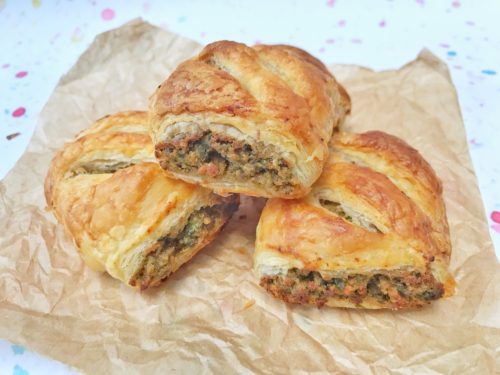 I used Jus-Rol ready rolled puff pastry which is vegan. The Granose Meat Free Lincoln Sausage Mix is also vegan, but if you have a sausage mix you prefer, use that instead. 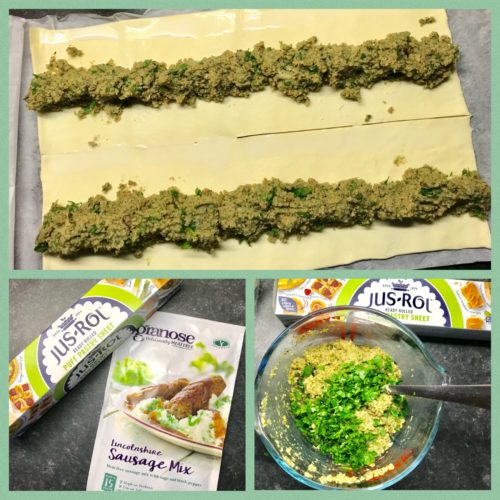 How to make Vegan Sausage Rolls:

Take your pastry out of the fridge and pre-heat your oven to 200°. Cover a baking sheet with a piece of greaseproof paper.

Make up the mix of Granose Meat Free Lincoln Sausage according to the packet instructions. Stir through your chopped parsley and season with salt and pepper. Mix well and taste, you might want to add more seasoning if you think it needs it. I tend to use quite a lot of pepper.

Unroll your sheet of puff pastry. Cut your pastry sheet in half length-ways. Spoon a thick line of the vegan sausage mixture along the middle of each piece of pastry and paint some of the soya milk in a line along one edge of the pastry. Roll the sausage up and make sure the pastry edge is sealed well. Cut the long sausage roll down into smaller sausage rolls.

I cut each of the two long sausages down to 7, so I had 14 in total. But you can decide how big you want each roll to be, you could just make two giant vegan sausage rolls! Place them on your baking sheet with the sealed side down. Slash the top of the pastry with a sharp knife and brush with soya milk. Put them in the oven for 20 minutes, until golden brown and delicious.

Serve hot or cold, whichever you prefer. They’re not a copy of the Greggs recipe, which contains Quorn, but these make a tasty vegan lunch or snack.

If you enjoyed this recipe, you might also like to try these easy cheaty sausage rolls or my vegetarian black pudding sausage rolls. 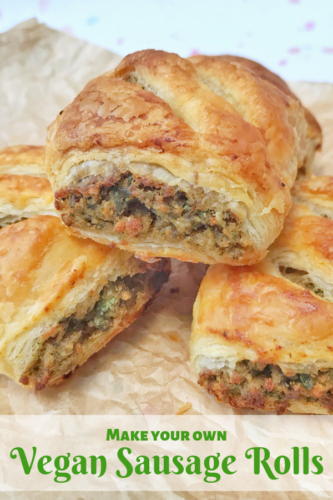