So what is my favourite soundtrack? I’m a bit of a film buff, alas I don’t get to go to the cinema as much as I’d like, but I do enjoy watching films at home. Plus it’s cheaper and the popcorn is fresher. Given my love of a Tarrantino movie and his usually awesome soundtracks you’d think my favourite movie soundtrack would be one of his, Kill Bill did come very close, but when push comes to shove you can take the girl out of Manchester, but not Madchester out of the girl.

Admittedly it’s not the greatest film ever made, but it’s all about the music scene in Manchester when I was growing up, the soundtrack for me has so many iconic tracks on it, so many tunes which remind me of some special times in my youth, so for me one of the best movie soundtracks is from 24 Hour Party People.

Look, I mean look at it, if you’re a person of a certain age with a penchant for indie music this is just chock full of classics. 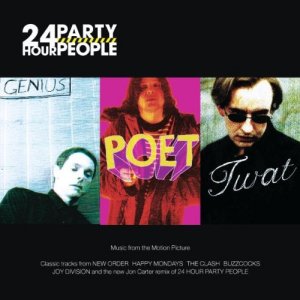