As a food blogger I’m always really interested to try new things and explore cuisines from all over the world. I love Thai, Japanese and Chinese food, but I’ve not as yet tried Korean food before. Last week I visited Wokooshii to try their Korean and Japanese food and ended up having one of the most exciting, interesting and delicious experiences of my food blogging career to date.

We were invited to Wokooshii by Gerry Yeung OBE, the founder of Manchester’s famous Yang Sing Chinese restaurant to sample the menu at his latest venture, Wokooshii which serves Japanese and Korean cuisine. Wokooshii is the only family run independent restaurant in the Trafford Centre, which does set it apart from the identikit chains in there.

Our genial host Gerry welcomed us and we sat down for a chat over a drink. I fancied a beer and Gerry suggested I try the Asahi Dry Black Beer which was a revelation, it was an unusual dark lager style beer which went incredibly well with the food and is something I’ll be looking out for again.

We chatted with Gerry and he suggested he order from the menu for us. Taking into account our likes and dislikes, he ordered a selection of some of the most interesting food I’ve had in a long time. The menu itself is a colourful picture based menu, which I personally liked. I find it useful to see pictures of some of the more unfamiliar dishes before ordering them.

To start Gerry ordered seaweed, (but not as we know it) fresh seaweed with beansprouts with a Japanese vinegar dressing; kimchi – the Korean national dish made from spicy fermented cabbage and a taster sample of the Korean sashimi tuna salad.

The fresh seaweed was delicious and much healthier than its deep fried cousin. It smelt and tasted of the sea and was delicate and flavoursome. Kimchi is something of a favourite of mine and I’ve had it many times before. The Wokooshii kimchi was excellent and packed a real punch. The Korean sashimi tuna salad is one of Gerry’s favourites and is a delicately flavoured dish of thinly sliced raw tuna, iceberg lettuce and leek with a dressing of Japanese chilli, sugar, vinegar and sesame oil, the tuna salad was a real highlight.

Next to the table came a selection of Mandu dumplings, a Korean speciality. I tried the pan fried vegetable dumplings, whilst my companion had the dumplings with pork and cabbage. The dumplings were soft and yielding, mine was packed full of delicately flavoured vegetables and would be something I’d order again and again. 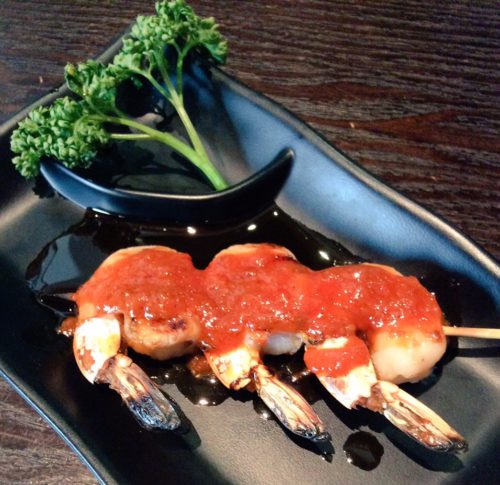 The dishes were coming from the kitchen thick and fast. Cucumber and Japanese radish Maki with soy sauce, wasabi and ginger; king prawn tempura made with the lightest and crispiest tempura ever; Yakitori sirloin beef roll filled with spring onion which looked so good. and prawn yakitori, perfectly cooked prawns with a piquant sauce of onion, butter, chilli and garlic.

Next to the table was something I was especially excited to try – a Korean pancake. It’s a flour and egg pancake packed with healthy vegetables. Traditionally these pancakes are served as an appetiser. It’s a simple dish but utterly delicious. The pancake was crispy on the outside, soft inside and one of my favourite things on the day. 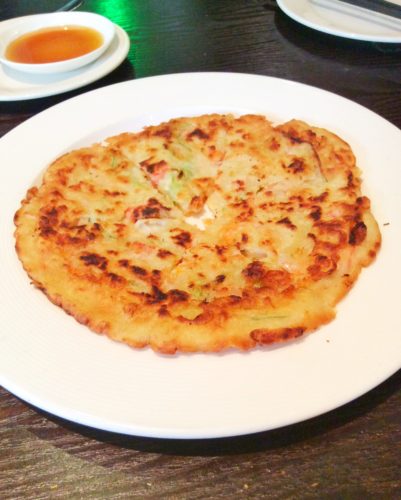 After taking a tour around most of the menu two final dishes were brought to the table, Teppanyaki Aubergine with scallops on the side served with teppanyaki vegetables which were simply cooked and peppery. The aubergine was beautifully cooked, tender and soaking up all the umami flavours in the sauce. The scallops were perfection and the whole dish just sung to me. 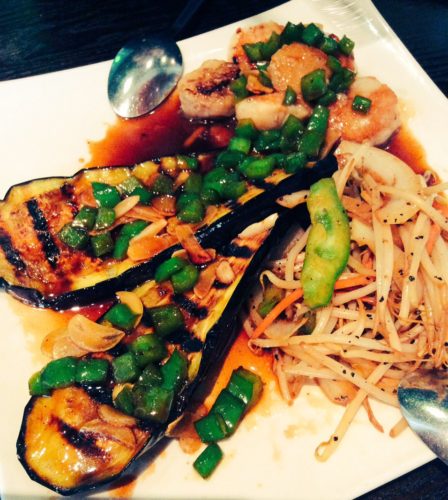 The final dish was something I’d never heard of before, a Bimbinbap which is a Korean dish consisting of rice with sautéed vegetables, chilli paste, and seafood or meat, with the addition of a raw or fried egg on the top. 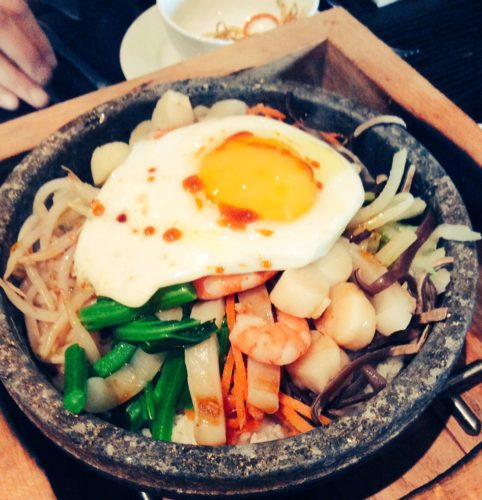 Bimbinbap is served in a piping hot dish fresh from the oven and is finished at the  table in front of you. It’s a bit of a showstopper of a meal and I particularly enjoyed the theatre of it being brought sizzling to the table. It comes with a fried egg on top, but you can ask for the raw egg yolk which would be cooked in the heat of the dish anyway. You can choose from the yellow sauce which is made from fermented soya beans, or the red sauce which is the same but with chilli, I went for half and half because a bit of spice in your life does you good!

Watch the Bimbinbap being stirred in the short clip below…

The Bimbinbap is one of the most popular dishes on the menu, it’s a big hot bowl of deliciousness and I especially enjoyed the crispy bits of rice. It’s a theatrical show-off of a dish and I loved it.

During the afternoon we tried so many dishes from the Wokooshii menu it was difficult to pick a favourite. Wokooshii is a mixture of ‘wok’ and the Japanese word for ‘delicious’ and the name describes the food perfectly.

I was blown away by the whole experience, Gerry was the perfect host and took us through the menu, introducing us to new flavours and textures and helping me to learn more about Korean and Japanese cuisine. I wouldn’t hesitate to go again next time I’m at the Trafford Centre, in fact I’ve been dreaming of the teppanyaki aubergine ever since. If you want something delicious and authentic, Wokooshii is well worth a visit.

Wokooshii is at 128 The Orient, Trafford Centre, Manchester, M17 8EH. Visit their website for more information.

We were invited guests of Wokooshii and were not asked to pay for our meal, nevertheless all images and opinions are our own.