Last month we jetted off to Cornwall for a “Sharp’s Adventure” weekend with Sharp’s Brewery. Alongside five other lucky couples, we were invited to join Sharp’s Brewery and Chef Nathan Outlaw for a food and drink adventure. The details were sketchy, but we knew not to have a big breakfast and to wear good stout shoes. Throw in a two night stay in a gorgeous 4 star hotel and the weekend had me written all over it!

We flew from Manchester to Newquay Airport on Friday morning, taking a taxi from the Airport to the hotel we had the chance to take in some of the lush Cornish countryside. We checked into the St Moritz Hotel, Trebetherick, Wadebridge, quickly unpacked and I headed to the spa for the afternoon. Himself took the complimentary Land Rover taxi down to Rock to explore, before joining me in the spa. It’s a hard life. 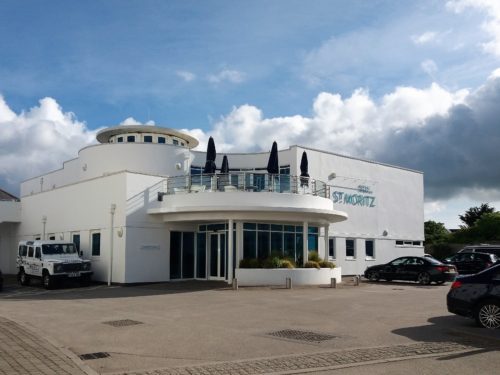 That night we had dinner and drinks in the very fine restaurant at the hotel, before retiring and having the best night sleep we’d had in a long time. The next morning we were up and ready for adventure, whatever that adventure was. 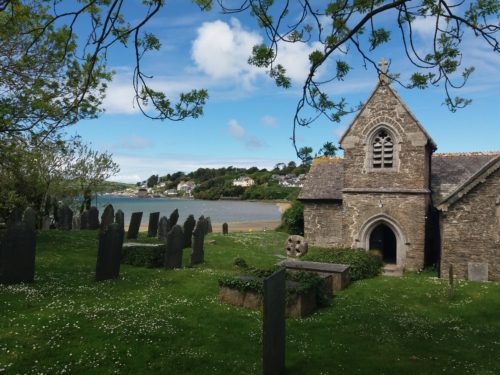 We met the other couples in the hotel reception and in small groups we were taken down to Rock for a tour of the Rock Shellfish Company. Luke Marshall whose family have farmed oysters of the Camel Estuary for years gave us a tour, showing us the oysters in their mesh nets on trestle tables out in the estuary. The Porthilly Oysters are delicious and they are in high demand, especially from local chefs. 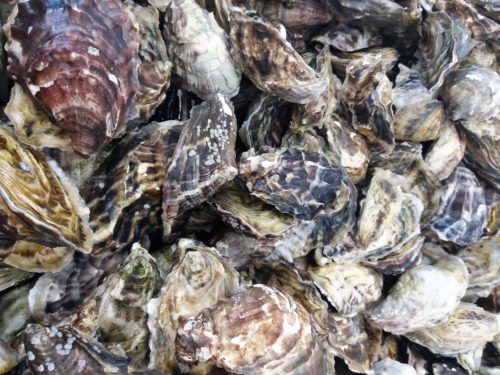 Luke showed us around the building where the oysters are purified in tanks before being sold on to wholesalers and restaurants. We also got a chance to taste these delicious molluscs, a rare treat to be able to try an oyster so fresh and pure. It was not an experience everyone relished, with several members of the group declining the chance to give them a try.

We were then given the directions to The Mariners Public House in Rock for lunch. The Mariners is a pub run by both Sharp’s Brewery and Nathan Outlaw and they champion seasonal local food, as well as serving a wide and glorious selection of Sharp’s beers. 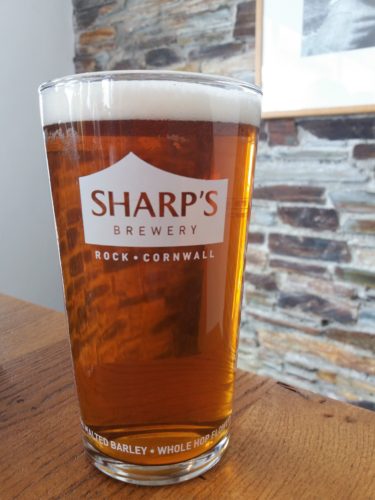 Lunch was excellent, if a little rushed, we had a minibus waiting outside ready to take us on our next adventure. All of the plates were as pretty as a picture and each item on the menu was listed with a matched beer. Had I had the afternoon free to imbibe, I would have thoroughly explored this option. 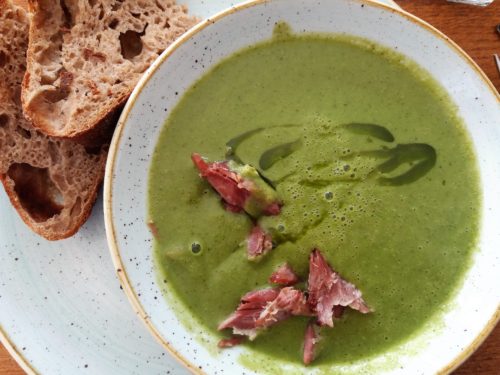 Starters at The Mariners included pea and ham hock soup and Cropwell Bishop blue cheese salad with chicory and walnut. The most popular main on the table was the breaded hake with tartare sauce and romaine salad – a thick fillet of hake served with bitter romaine offset with a zingy and well executed tartare.

Pudding, not that we had much room left, was a choice between steamed treacle and ginger sponge with custard or St. Clements posset, granita and shortbread. I opted for the steamed sponge, I’m a slave to my school dinner cravings, but the pudding was as light and fluffy as it was possible to be. Comforting enough to induce a little nap on the minibus to our next destination.

From Rock, the minibus sped us an hour and a half down the coast to our next and final destination, a field somewhere on the Zennon Peninsula where chef Nathan Outlaw was busy with a barbecue, some tables had been beautifully set and ominously a row of hard hats and harnesses lay on the floor. 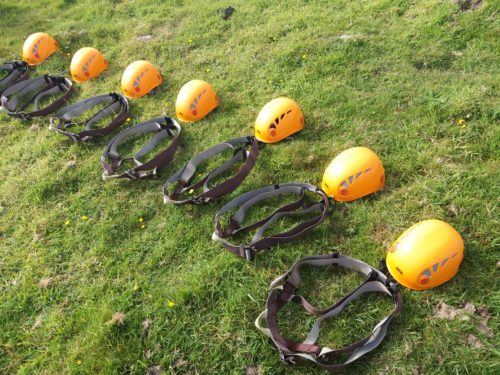 Regrettably my bad back meant I had to stay at the top of the hill drinking beer and watching Nathan Outlaw cook for us, but my intrepid husband donned a hard hat and had a go at abseiling with the rest of the group under the expert guidance of The Newquay Activity Centre. I was sad to miss out on that particular adventure, but up at the top of the hill we were having a bovine adventure of our own. 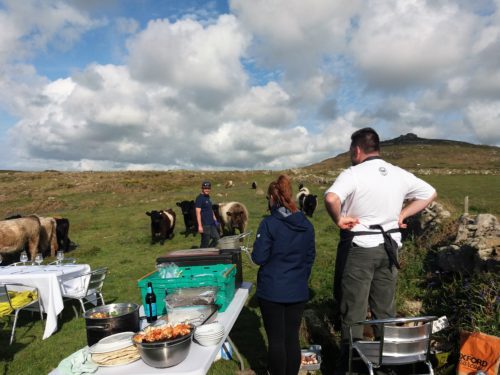 As Nathan and the other chefs were preparing our meal, a herd of cows wandered into the field to check out what we were up to. They were pretty friendly cows and needed to be gently persuaded to leave our al fresco set up alone. Thankfully they did, and most of the cows had moved on by the time everyone was back up after their abseiling adventure.

Given that dinner was prepared almost entirely using two small barbecues and on a slightly wobbly table in a field, Nathan had prepared a real seafood feast for us all. Watching him grill flatbreads, pineapple, monkfish, prawns, scallops and an array of vegetables for our barbecue banquet was a bit of a privilege for a foodie like me. 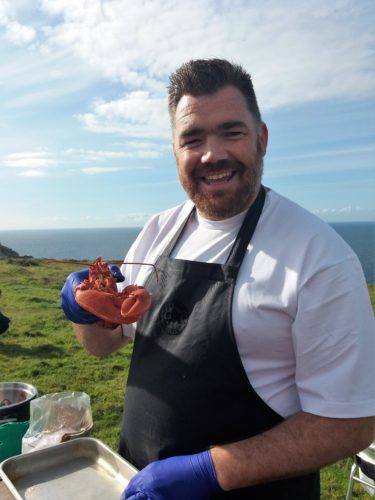 Our seafood feast began with smoked mackerel and seaweed pate; seafood ceviche (barbecued brill, prawns, scallops and lobster) with tomato, red onion and coriander; and a barbecued octopus salad with tomatoes, watercress and cucumber, all served with flatbread.

The main course was barbecued monkfish which had been marinaded in potted shrimp spice and served with crushed new potatoes, grilled fennel and capers. Dessert was barbecued pineapple with meringue, spiced rum syrup and lime cream. It was all delicious and it was a real privilege to be cooked such a personal and exceptional meal by Nathan.

Dinner was matched with beers from Sharp’s Brewery. Favourites included their biggest selling beer, Doom Bar, their new-ish Pilsner and my new favourite, Atlantic Pale Ale – a fruity ale packed with citrus flavours and sweet notes which worked exceptionally well with the seafood.

Sadly our Sharp’s adventure was drawing to a close, all twelve of us clamoured onto the minibus back to the hotel, tired but very, very happy.

We’d eaten incredibly well, we’d drunk many excellent beers and discovered a few new ones, and we’d had a real Sharp’s adventure. Sharp’s Brewery had treated us to a once in a lifetime, money can’t buy experience, and I think we were all sad it was over. 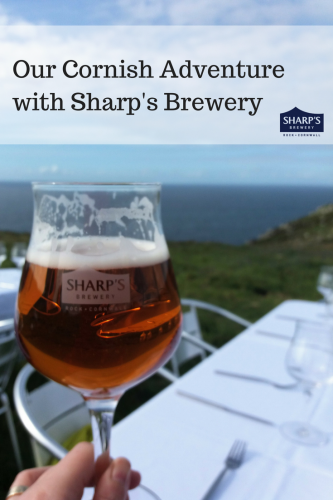 Thank you to Sharp’s Brewery and the St Moritz Hotel, The Rock Shellfish Company, The Mariners Pub, The Newquay Activity Centre and Nathan Outlaw for showing us a good time and for making our Sharp’s Adventure an incredibly memorable one!