Summer is here and the festival season is upon us once more. Whether you’re off to Camp Bestival, Refract at the Waterside Arts Centre in Sale, or taking in the sights at the Edinburgh Fringe, you must (you really must) catch “indie-surrealist kids’ singer songwriter” Nick Cope this summer. Nick Cope is a professional singer and songwriter, who first enjoyed international success as lead singer and songwriter with The Candyskins in the 1990s. These days he is a much loved writer and performer of beautifully bonkers songs for kids. 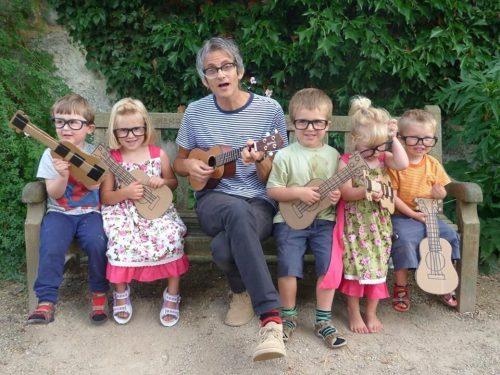 Nick first came to my attention when I saw he was appearing at Refract at the Waterside Arts Centre in Sale on Sunday 30th July. I looked him up on YouTube and I knew that my son would love his work, and he really really did.

Nick has a number of CDs, each one is full of his funny, whimsical songs for kids of all ages. I now have two of his CDs; The Pirate’s Breakfast and A Round of Applause for The Dinosaurs which I know will fill a few happy hours on the long drive to Cornwall and back this summer. The songs are simple, funny and really relatable. I would love to see Nick perform live and I’m going to make it my mission to catch one of his shows soon!

Nick has also recently released a DVD – The Nick Cope Show which is an animated compilation of brand new and classic videos by Nick and his son Burt (Burt has done some of the animations for Nick’s songs). The DVD is narrated by a cartoon Nick and features favourites like – A round of applause for the dinosaurs, I’m a little lizard, Flower in the garden, the classic The baby’s done a poo and many more. This 25 minute film is available on DVD and iTunes download.

Nick performs all over the UK at all the major art and music festivals. If you want to see him this summer (or at any other time really), all of his gigs are listed o his website. He will be appearing at Camp Bestival, Refract at the Waterside Arts Centre in Sale and the Edinburgh Fringe over the next month or so.

Nick is brilliant. We are big fans and I hope you will be too!