I love going out for a drink with friends, catching up and having a good natter, but I’m a bit of a home bird so I don’t like to stray too far from the fold. Living in Didsbury it does mean that I’m lucky enough to have a whole raft of pubs, bars and restaurants to choose from whenever me and the girls fancy a night out. Last week Chalk Bar & Grill invited me to their re-launch party, and as it’s the nearest bar to my house, it would have been very rude to say no.

Chalk Bar & Grill is located in Didsbury village and has recently been taken over by MAD Ltd, the team behind several other Manchester bars I have frequented including Rosylee, Tusk, Walrus, The Fitzgerald and Hula. They’ve given Chalk a little cosmetic makeover and have updated their menus, the cocktail menu has had a major overhaul, which is always a sight for my sore eyes. 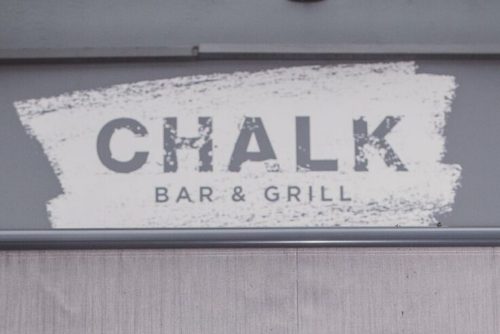 The cocktail menu is extensive and sensibly priced at about £8 each, give or take. They have a list of “Twisted Classics” which include an Acai Cosmopolitan, Siberian Margarita and a Peach Punch Mojito, all of which are available for 2 for 1 every day between 5pm – 8pm. 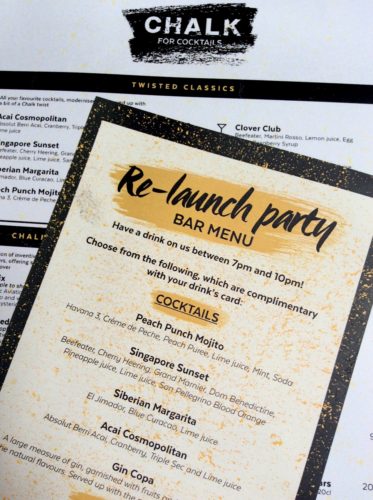 Between us we sampled the full re-launch cocktail menu (one has to be thorough in these things). What you can see below is the Siberian Margarita (the blue one) and the Singapore Sunset (with the umbrella). The margarita was garnished with pink salt and was strikingly pretty, alas it was not to my cocktaily taste, but my companion loved it.

I can heartily recommend the Peach Punch Mojio and the Singapore Sunset, though for me, a girl of simple tastes, the Gin Copa was so refreshing I went back for seconds (and it turns out they have a whole separate Gin Copa menu, so that’ll need some exploring at a later date)! 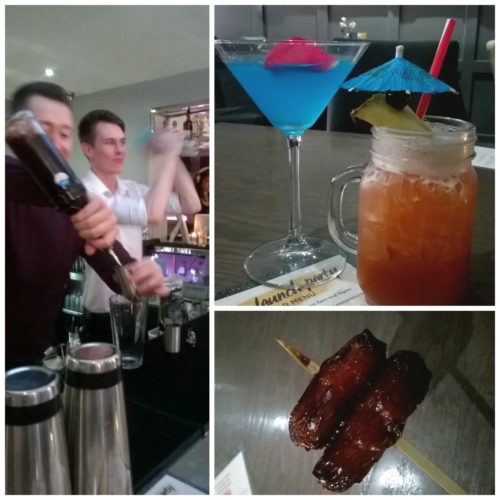 The new menu looks pretty good too, with some nice veggie choices which I’m hoping to try out fairly soon. During the re-launch party we were treated to a whole raft of canapes, including some very lovely veggie bruschetta and some sausages and other meats on sticks.

What I particularly like about Chalk Bar & Grill is the real mix of people in there. Old and young, families and people having meetings during the day, people dressed up and people not, and it’s just got the right amount of hustle and bustle for me. I’m pleased to see it’s been given a new lease of life and all on my doorstep too. Can’t be bad.