Coming from Manchester we are used to delicious and soft water flowing from our taps, we don’t really suffer from limescale build up at our home in the glorious north, but here in our uncle’s holiday cottage in Devon I’ve never known anything like it. The kettle is furry, the taps have crusty white deposits on them and the shower head is the worst. We’ve been coming here for years and each year we try to clean the shower head of its limescale build up. Over the years we’ve tried vinegar and a range of descaling products, all with mixed amounts of success.

I was sent a bottle of Durgol Universal to try out. Durgol is a liquid decalcifier from Switzerland, which is designed to remove limescale from kettles, coffee machines etc as well as household items such as shower heads.

Costing £9.99 for a 500ml bottle I was expecting really good things from it. The instructions suggested a ten minute immersion in undiluted Durgol for our shower head. Knowing just how bad it would be I gave it 15 minutes and then rinsed the shower head throughly in cold water. We tried the shower out the next day, it was vastly improved, but as I still had the bowl of Durgol I decided to give it another soak, so I popped it back in the undiluted Durgol and left it for another half an hour. I then tested it again and it was almost like new.

Having previously tried a number of other products of this ilk, I was impressed with the Durgol. Sure it took a bit longer than the instructions suggested, but the limescale was thick and years old. The bonus was that we were still left with the bowl of Durgol, so waste not, want not, we cleaned the sink and taps with it, which left them very clean and limescale free, a little in this instance, does go a long way.

For such a powerful liquid you expect it to smell quite potent, it didn’t, it had a neutral smell, not chemically or bleachy at all. I think Durgol Universal is a really useful kitchen maintenance product, we re-used the solution once we’d soaked the shower head, so we made it go further and therefore we thought it was good value for money.

I think if you live in an area prone to limescale build up, then maintaining your appliances is essential and can keep them in good working order for longer. It’s a case of spending a little to save money in the long run.

You can find out more about Durgol Universal and other Durgol limescale products on their website. 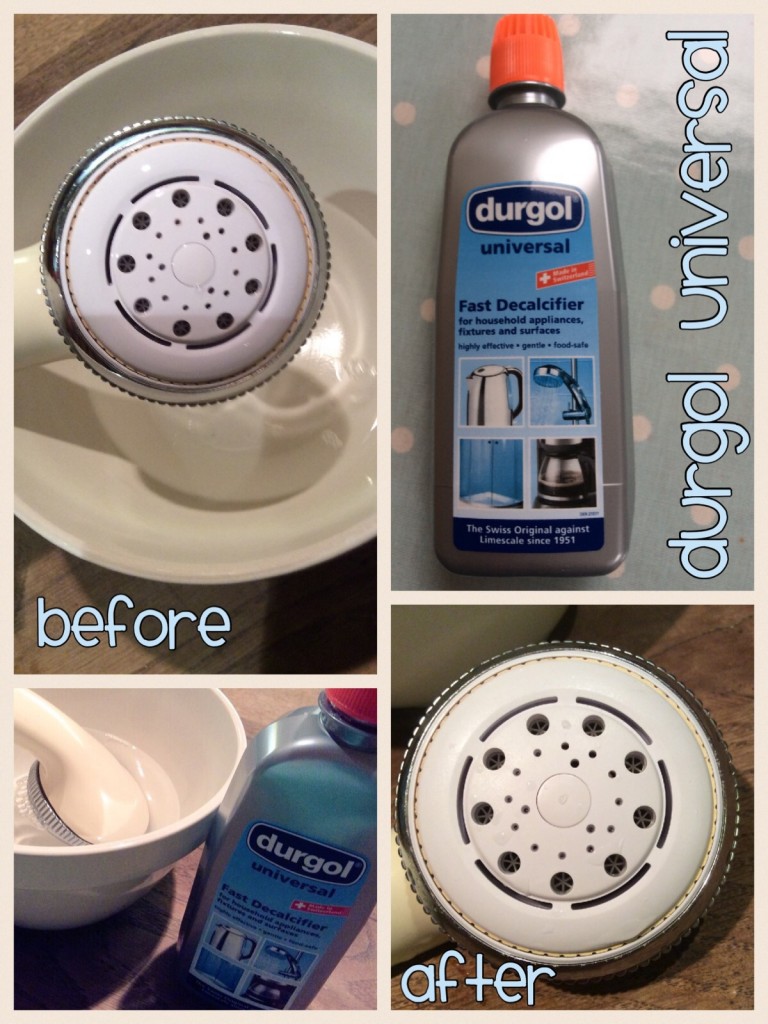 Note: We were sent a bottle of Durgol Universal free of charge for review purposes. All images and opinions are our own.